Today’s Card of the Day article is another one of those “two birds with one stone” articles. I was a bit surprised to find out that I haven’t featured Tommy Leach here yet. After all, he ranks ninth in Pittsburgh Pirates history with 1,574 games played. He was a member of their 1901-03 National League pennant run and a key player for the 1909 World Series champs, leading the league with 126 runs scored that season. I was also surprised to find out that I haven’t had a T205 card here yet. It’s a very popular pre-WWI set that pictures 14 players from the Pirates, yet here we are 13 months into this series and this is the first card from this popular early tobacco set. 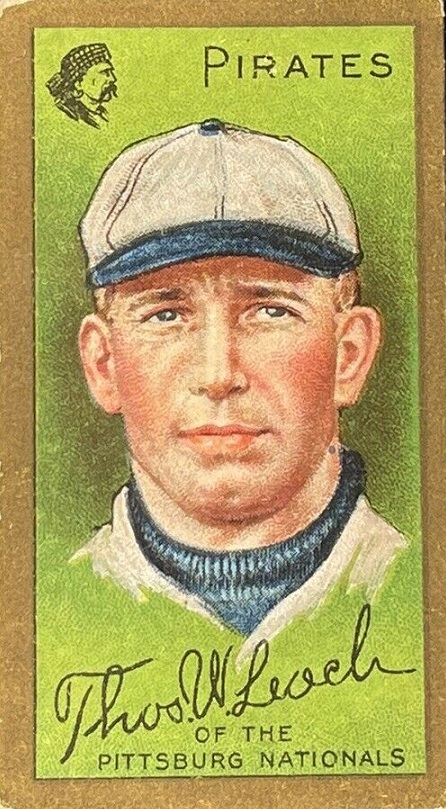 For those of you unfamiliar with this set, it is sometimes referred to as the gold border set. Interesting story behind that odd name. It’s because the cards have gold borders. There are 198 different players pictured in the T205 set (T stands for tobacco, while 205 is just a catalog number). Almost every card in the set has this same large portrait type artwork, with the exceptions being the small minor league subset. The T206 is the most popular set from this era, but the T205 set has better quality artwork, at least when you look at the consistency of the work. Every card features a realistic depiction of the player in the T205 set, while the T206 set has some soft offerings that look more like generic work, instead of depicting the actual player.

The T205 set has some great ideas here. They included a facsimile autograph of the player on the front, which you’ve probably noticed often on Topps cards, but it was not a popular practice during this time. The card also offers an interesting window into baseball history. As you probably know, the Pirates team nickname came around in 1891, but it was just that at the time, a nickname. In fact, the team preferred to be called the Braves in 1894 and the Patriots in 1898. As you can see at the bottom of this card, the team is called the “Pittsburg Nationals”. That wasn’t a team name, rather it tells you that they were in the National League. That American/National designation was used back then because team nicknames weren’t official and five cities had both National and American League teams, New York, Boston, Philadelphia, St Louis and Chicago. However, this card also includes Pirates at the top and a logo. The logo part is definitely something new during this time for cards, but the use of Pirates wasn’t a common practice either, since it was just a nickname. It wasn’t until 1912 that the team actually put the word Pirates on their uniform. Between the gold borders, the quality artwork, the use of Pirates and a team logo, and the facsimile autograph, the T205 set is one of the most significant baseball card sets ever. 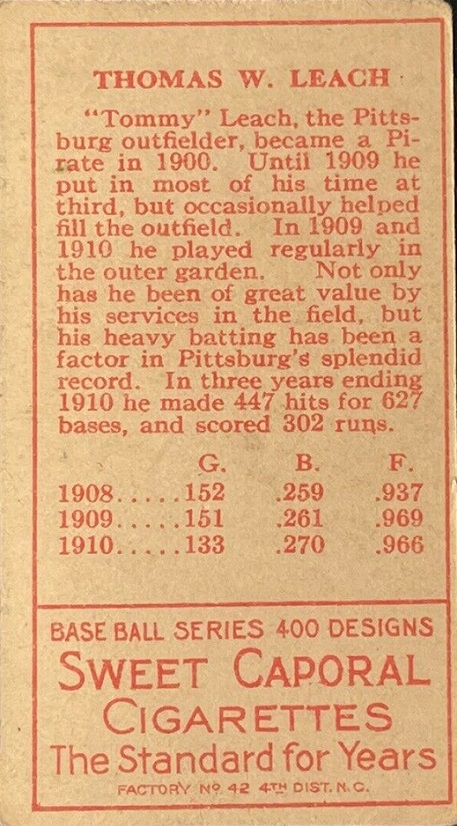 These cards also included something rarely seen during the day, though it’s obviously very limited here. You don’t see stats on many early cards. They chose to go with three categories, games, batting average and fielding percentage. Not the best three categories, but early stats often referred to the latter two stats for players in print when talking about their performance. If they added two other stats, it would probably be runs scored and stolen bases, which were a big part of deadball era baseball.

The ad on the bottom is one of numerous ad backs you can find in the T205 set, all of them tobacco/cigarette brands. Sweet Caporal was extremely popular during this time and featured heavily in the T206 set, as well as other cards issued during this time. Some of the backs add extra value to the cards, but this is a common one, so all of the value is for the player on the front.

If you’re interested in picking up this card, there aren’t many options on Ebay. That’s probably what you should expect for something printed 110 years ago, though they are highly collectible. They made a reprint set of these cards somewhat recently, which are easy to tell by a white background and black print on the back (it also has “reprint” in small letters on the back, though shady dealers have been known to damage that part and attempt to pass it off as real). A quick lot at available backs makes it very easy to tell the difference between the real cards and reprints. Right now there are nine T205 Leach cards on Ebay, ranging for a poor condition card that is ungraded, to a PSA 6  with a $900 price tag. These cards are condition sensitive because of the borders, where even the tiniest damage shows up clearly. You should expect to pay about $40-$50 for the average Leach card, one that would grade as a 2-3, but still looks very presentable.