Today’s Card of the Day features Amos Otis, an outfielder for the 1984 Pittsburgh Pirates, who had a tough season that year to finish out his 17-year career, but he was underrated star during his day for the Kansas City Royals. Otis was on two cards during his time with the Pirates, appearing in two sets that were put out during the 1984 season. Both Topps and Fleer put out smaller sets after the regular issue set, which showed players on new teams and had some rookies who debuted during the season. The Topps version was called a Traded set, while the Fleer set was called Updated set. I went with the Fleer set as my choice here because we haven’t featured that set here yet in this series. Otis appears in the regular 1984 Fleer set with the Royals, where he played 14 seasons (1970-83). He signed with the Pirates as a free agent on December 19, 1983, which was too late to have him with the Pirates. So instead Fleer got a Spring Training photo and included him in their Updated set, which is today’s Card of the Day. 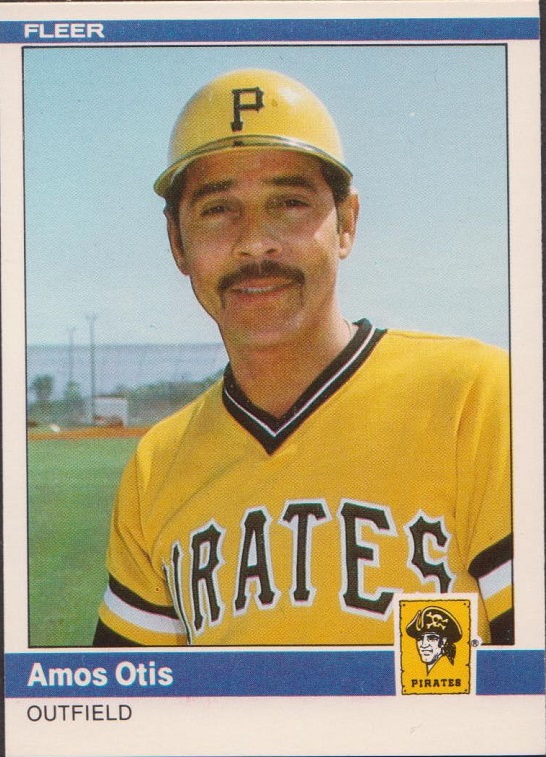 The Pirates had some high hopes for the 37-year-old Otis, who was a five-time All-Star and a three-time Gold Glove winner. However, his last Gold Glove award came ten years earlier and he had one All-Star appearance in his final ten seasons in Kansas City (a little misleading because he was All-Star worthy in 1978-79). However, he had a .669 OPS in 1983, which was his career low for a full season. He also played just 98 games, a low during his time with the Royals. He had big shoes to fill coming into Pittsburgh, with Dave Parker (free agency) and Mike Easler (trade) both leaving in the off-season. He got off to a slow start, then crashed into an outfield wall on May 18th and landed on the disabled list, which was basically the end of his time in Pittsburgh, even though he returned in mid-June and stayed around until early August when he got released. Since he wasn’t active at the end of the season, he didn’t get any cards in the 1985 set, making this card, and his Topps Traded card, his last cards during his playing career.

In my opinion, the 1984 Fleer set isn’t their best or worst offering as far as design. It’s rather simple and plain with the white border, blue stripe at the bottom and plain looking writing for the name/position. The Pirates cards are obviously the best ones in the set because of that great logo in the bottom right.

Before we look at the back of the card, let me clear up a little confusion here as to the name of the set. If you look up this set online, it will say Update, but the box that the cards came in (they were sold as a set only, no packs) says Updated. The box actually calls the set “Updated Trading Cards”, which also came with logo stickers. The stickers actually got top billing in the title (see photo below of a sealed set). Someone at Fleer decided to shorten it down to “Update” for the 1990 release and the 1984-89 sets retroactively became known as Update sets. Either way is correct in my opinion for the 1984-89 sets, though Updated is rarely used, even though it’s written that way on the box. 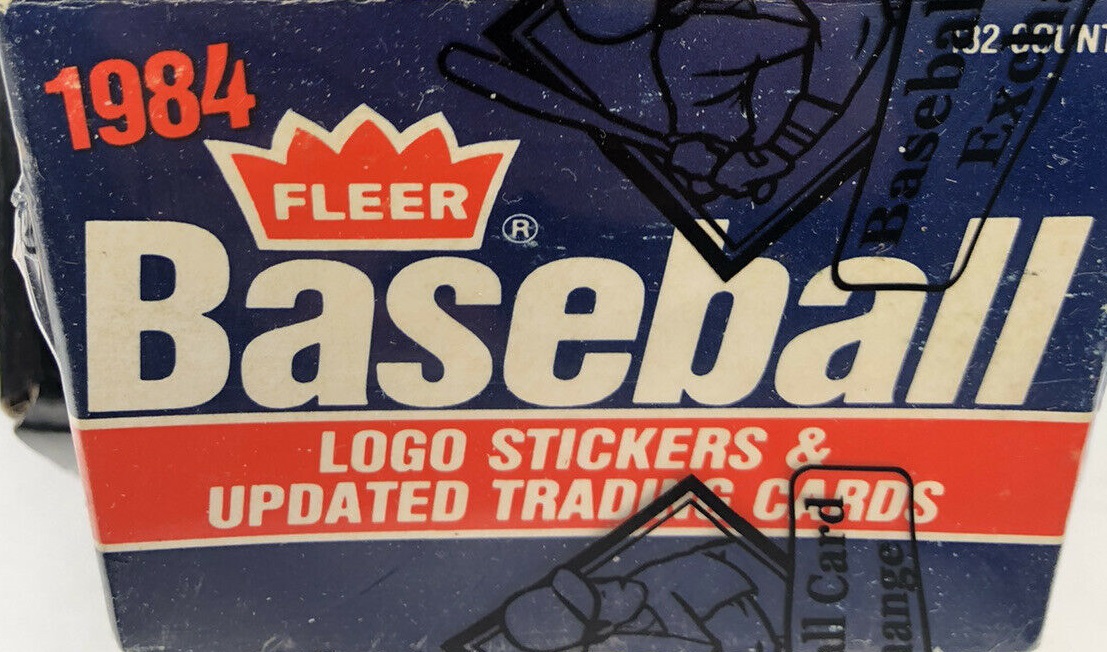 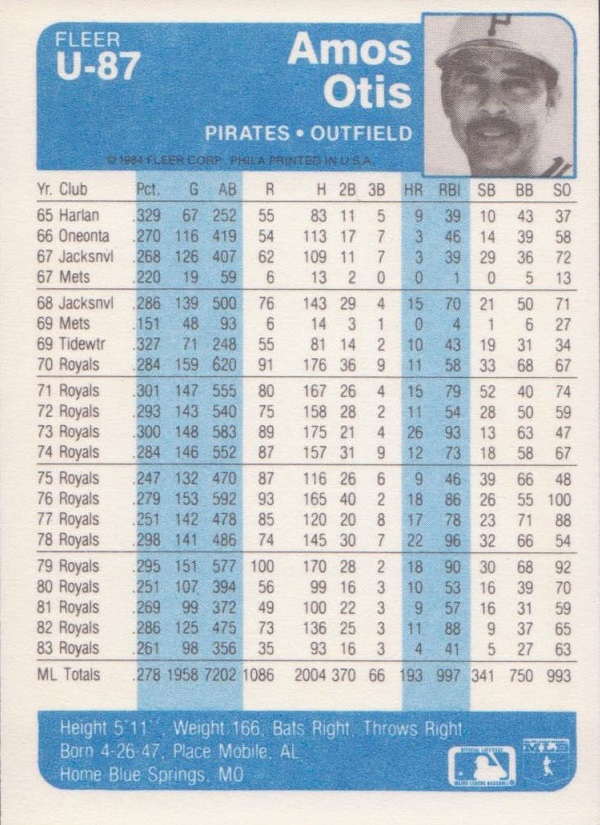 The back has a second photo for Otis, though it basically looks like the photo on the front of the card, which wasn’t the case on most cards. The Update backs exactly like the back from the regular 1984 set, except for the “U” before the number in the top left. Without knowing the cards, that’s the only way that you can tell the difference between an Update card and a regular issue set. Fleer did a great job of including all of his pro stats here. It’s almost his entire career, except his forgettable four months with the Pirates. You’ll be relieved to know that it took him just six games in 1984 to pick up that 1,000th career RBI. However, the Pirates released him two games shy of 2,000 for his career.

The 1984 Fleer Update set was not heavily produced. It was their first attempt at a set to rival the Topps Traded set and they didn’t take any chances with overproducing it. It’s not impossible to find, but the rarity did drive up the price of the set. Only 11 auctions are on Ebay right now for this card and three of those cards are autographed. If that interests you, then you’ll pay around $10-$15 for that card. The cheapest one without an autograph of the other eight auctions is $2, then there’s one for $2.79 and the rest are around $4-$5 each delivered.