Today’s Card of the Day is the second one that we have featured for Pittsburgh Pirates pitcher Bob Johnson. His first one was nearly a year ago today, one of the earlier articles in this series. We first looked at his 1974 Topps card, which has an error, and an interesting photo for at least three reasons. Johnson was with the Pirates for three full seasons, during a time when not many baseball cards were being produced. Topps had a stranglehold on the baseball card business at that point. So for his second offering here there weren’t many options…three to be exact.

His 1971 Topps card shows a closeup of him from the shoulders up with no cap. That’s because the photo was taken while he was with the Kansas City Royals and they cropped it so you couldn’t tell the team. The 1972 and 1973 cards showed him in full Pirates uniform, so the deciding factor between those two choices ended up being the amount of times I’ve posted cards from each set. The 1973 Bob Johnson card is our Card of the Day today simply because we have had more 1972 Topps cards here over the last 13 months. 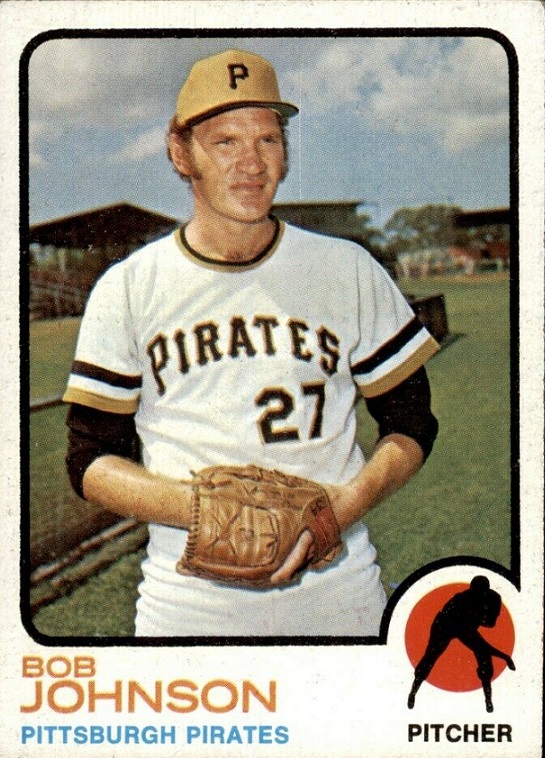 Topps started using action game shots during production of their 1973 set. All previous years included simulated/staged action shots. Johnson wasn’t one of the lucky ones to receive a game action photo on his 1973 card, though many of those photos used that year had poor quality compared to the posed photos like the one you see above from Johnson at Spring Training. 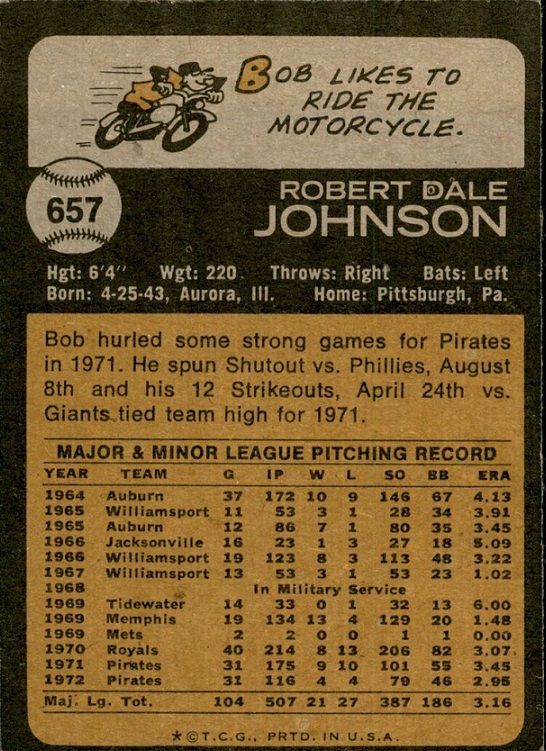 The back includes a strange fact at the top.  Johnson did like to ride motorcycles, but riding one nearly ended his career in 1967 when an accident left him with a badly injured left leg and at least two doctors recommending that his foot should be amputated, so maybe him speeding on a motorcycle shouldn’t be the main fact here?  As a side note, I had read elsewhere before today that Johnson didn’t return to the baseball field until 1969 due to the injury, so I actually questioned the “in military service” when I read it here, which I saw before I wrote up the bio on him you read this morning (I’m assuming, but it’s probably true). Turns out that he made a miraculous comeback after 2 1/2 months and was able to pitch at the end of the 1967 season. The military service also turned out to be true.

Anyway, I love that Topps included all of his stats here from his first season of pro ball after signing with the New York Mets out of college, to his second of three seasons with the Pirates. They didn’t always include full minor league stats if a player had a longer career. They obviously went light on the statistical categories here, but those are the same categories they used for a while. In 1976, Topps added runs and earned runs for pitchers, then in 1981 they added games started, complete games, shutouts and saves.

The color combo on the back of 1973 Topps is one of my favorites from the era, not so much for eye appeal, rather for the lack of eye strain used to read the stats. It also helped that they limited the stat categories, so they didn’t have to use a small print. Still a decent color combo though.

This is a fifth series card from the 1973 set, making it a high number card. For some sets that adds a lot of value to the cards, even commons, but it’s not true for the 1973 set. While the card isn’t plentiful on Ebay with only 35 options to choose from (low for 1973 Topps cards), they can still be had for $2-$3 delivered. The highest priced one is a PSA 9, which is going for $57. For comparison, there are three Roberto Clemente PSA 9 cards on Ebay from the 1973 set and the lowest priced one is $2,000. The Johnson cards sell though, with an equal amount of sold copies over the last three months, so there are 1973 set collectors out there.