There weren’t any card options for the five Pittsburgh Pirates born on April 24th, at least not ones showing them on the Pirates. In this morning’s This Date in Pittsburgh Pirates History article, we also mentioned two Opening Days that occurred on April 24th.  Max Carey was involved in one of those games, so I decided to feature him in today’s article. The Hall of Fame center fielder has been covered in this series just once in 13 months, back when we looked at his 1915 Cracker Jack card. I settled on an E220 card for our second Carey offering because we haven’t featured any cards from 1921 here yet. If I’m not featuring a new player in one of these articles, then I like going for a new set. Obviously if this is the first card from 1921 we have used here, then this is also the first card from the E220 set. 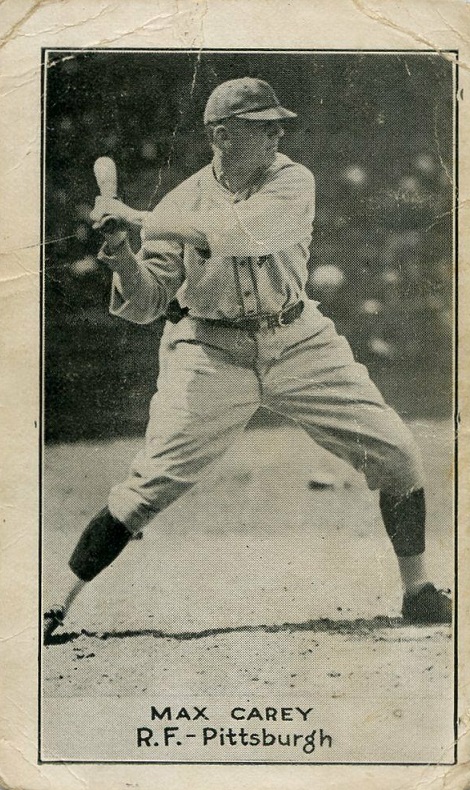 Carey’s Cracker Jack card that we previously used is from an iconic set that is widely collected and valuable. It’s an artist rendition of a photo though. I prefer the real photo cards like the ones used in this set. This isn’t a common card, so I had to settle for an off-grade card to use for the scan. Down in the price section, I have noted an interesting fact about the photo used here. This is a great action photo of the ten-time stolen base champ. It’s a nice close-up shot of the batting stance that helped lead him to a .285 career average, while playing a majority of his career during the deadball era. One of the reasons that I picked this particular card is that I really like the writing on the front. It’s a bit different from most cards you see from back then that used your typical typewriter lettering. The gray background for the name/position/city part also makes it look like it’s right on the photo. 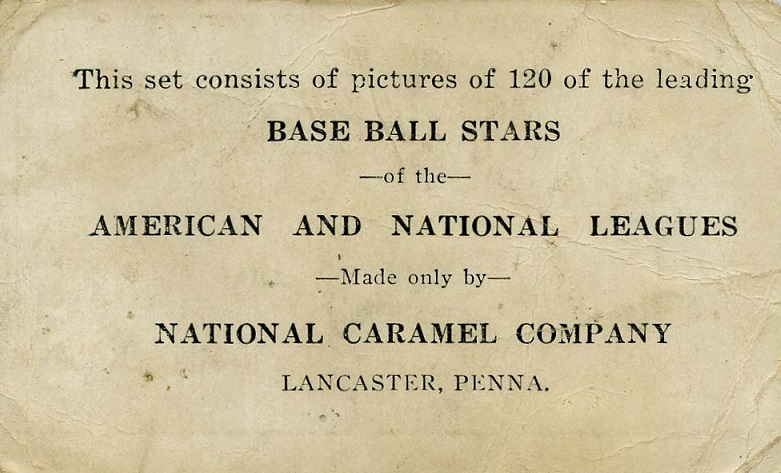 I have often wondered why the manufacturer here decided to abbreviate Pennsylvania with five letters and also so much room to spell it out, especially once you decide to go to five letters. Maybe they just didn’t know how to spell it so they stopped. Reminds me of the Mitch Hedberg joke (you definitely need to know who he is if you don’t) where a friend asked him the abbreviation for a word and he said “Just start spelling it, then stop”.

I’ve mentioned it before, but when you see old card sets that start with “E”, followed by a number, the E means that they are early caramel cards. As you can see, these cards were put out by the National Caramel Company. The “220” in the set name was just a catalog number that came along well after this set was produced. Collectors in 1921 were not calling this set the E220 set in their carrier pigeon notes to friends that wanted to trade cards with in other towns.

If you’re interested in this card, then there are three options on Ebay as of the time of this writing. The one above is ungraded and selling for $240. There’s a nice one for $525 (with a best offer) and a worse one for $200, both graded. However, if you just like the pose, then there are more options. The back isn’t appealing enough to settle on an E220 because of the price, though I will admit that the writing on the front really catches my eye, so I’d prefer this card. This same exact photo was used on an E126 card, which was produced in 1927, six years later. That’s actually a more expensive option. This photo was also used in the 1923 Willard Chocolate set, also a more expensive option. In the same price range, you can find it in a strip set from 1922, cataloged as a W501 card. It’s in the 1922 Neilson’s Chocolates set too, which has a nice ornate design on front. If you want a cheaper (not cheap) version, then settle for the E121 set of 80 card from 1921-22. That will still run you over $100 dollars in low grade.