Today’s Card of the Day comes from the 1958 Topps set, which has only been featured here once so far in this series. Today’s featured player is Ron Blackburn, who spent his entire Major League career with the Pittsburgh Pirates. He was born on this date in 1935 and debuted in the majors with the 1958 Pirates, making the team out of Spring Training. He remained with the club through late July of 1959, before being sent to the minors, where he finished out his 12-year pro career in 1964. There are three choices for Blackburn from Topps, even though he only played two seasons in the majors. Topps put him in the 1958 set before he made his big league debut. He then received cards in 1959 and 1960 sets. I personally like the 1960 design the most out of those three sets, but we have already featured four cards from that set here since we started this series 13 months ago. The 1959 set has been the subject of three articles here already, so the 1958 set became the choice for today based solely on being almost ignored here previously. Today’s Card of the Day is the rookie card of Pitcher pitcher Ron Blackburn. 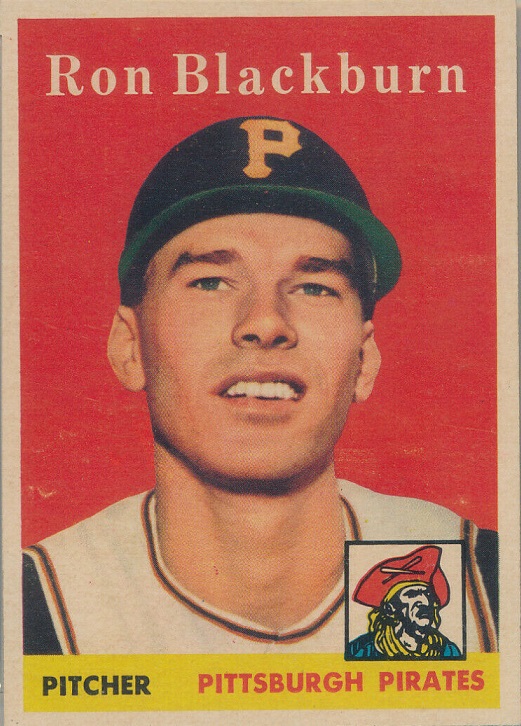 Topps had a colorful design in 1958, using a solid background for every player. The name/position/team/bottom bar were in various color combos. Red was a popular background color, but there was also orange, green, yellow and blue, with the orange and blue ones having dark/light shades of each color. My personal opinion is that I like the color combos on this card the best. It can also be found on fellow Pirates teammates RC Stevens, Whammy Douglas, Bob Friend, Bill Mazeroski and Big Klu, Ted Kluszewski. 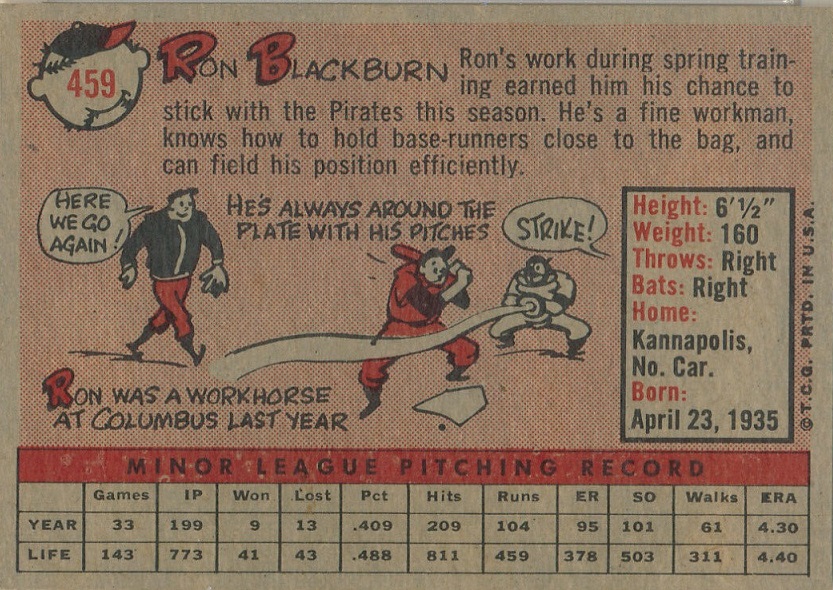 In 1958, Topps included one year of stats and a career total. In this case, Blackburn had no prior big league stats, so they went with his minor league totals and noted that in the red bar above the stats. As you can see, he didn’t exactly dominate in the minors, but he was also 22 years old and had 773 career innings, so a lot of that work was done at a very early age. He debuted in pro ball at 18 years old and threw over 200 innings just two years later during the 1955 season.

I’ve mentioned the generic gray players on the back that they use for every player, which look nothing like any baseball player ever. However, the ones on this card look like ghosts, or some Halloween movie villain (does he have a lobster claw for a right hand?). Part of me wonders if I actually did this artwork in a previous life because it looks very familiar to the baseball players I drew at five years old. The artwork is usually much better from Topps, with more of a happy cartoon look.

Anyway, the backs of all 1958 Topps cards had a cartoon with a fun fact about the player on the front. They also had a small bio section up top for everyone. That section gives away something about the print date of this particular card. Topps used to release cards in series throughout the year. A card in the first series wouldn’t have a fact about Spring Training due to the timing. I don’t have the exact dates for the series releases in 1958, but the first cards released only include the first 110 cards of the 494-card set. As you can see on the back of Blackburn’s card, he’s #459, which means he was part of the final series (sixth) that consisted of 55 cards and it was released during the middle of the 1958 season. Usually being part of the high number set would drive up the price, but that doesn’t happen with this card…

This particular scan I chose comes from a PSA 9 card, which is basically as nice as you can get. There are PSA 10’s from 1958, but you don’t see them too often. The card in the scans above is for sale for $300. That’s great if you can afford it, but most people won’t spend that much on a card of a common player from the 1958 set. I’ll note that 1958 Topps cards trade heavily on Ebay and you literally have hundreds of choices if you want this card. There were 249 active auctions on Ebay for Blackburn when I wrote up this article. There were “only” 37 completed auctions over the last three months. That means a lot of these cards have been on Ebay for quite some time, Supply exceeds demand, even though it’s still a popular set to collect. Anyway, you can get a decent copy of this card for as low as $2-$3 delivered (currently 13 auctions in this range), and you can also get a PSA 8 for around $35.