Today’s Card of the Day is a player who surprisingly hasn’t appeared here yet on a solo card, but he has been here before on a 1984 Topps leaders card, as well as being a very small part of the 1980 Topps team checklist/team photo card. It’s finally time that Dave Parker gets his own article to himself here, and we start with his best available card, at least in my opinion. Parker played for the Pittsburgh Pirates from 1973 through 1983, hitting .305 in 1,301 games, with 166 homers, 758 RBIs, 123 stolen bases and 728 runs scored. He was a four-time All-Star while in Pittsburgh, a three-time Gold Glove winner, a two-time batting champ and he was the National League MVP in 1978. Basically, he was good. Topps missed the boat with including him on one of their group rookie cards in their 1973 set, and he spent three months in the majors later that season, using up his prospect status. That led to a card picturing a 22-year-old Parker with no indications (on the front) that he was a rookie. He didn’t put up big stats as a rookie, and didn’t break out as a sophomore in 1974, but he established himself as a star during the 1975 season. Here’s a look at the 1974 Topps Dave Parker rookie card. 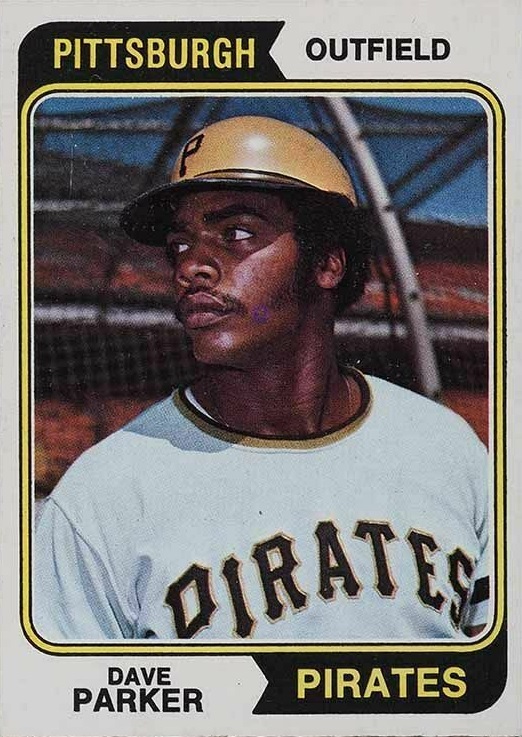 I’ve mentioned this before, but I’ll say it again. I’m a big fan of when Topps used team colors in their front design for the cards. The Pirates cards in the 1974 set all had the yellow and black writing on the front and it looks great when set alongside the black & gold for the team uniforms. This photo was a rather recent one for Parker, since he came up to the majors in July (July 12th MLB debut) and the background lets you know that this was taken while he was in a big league stadium. He batted .288 in 54 games as a rookie, making a total of 31 starts, seeing time at all three outfield spots. He had the same role in 1974 before taking over right field full time in 1975. 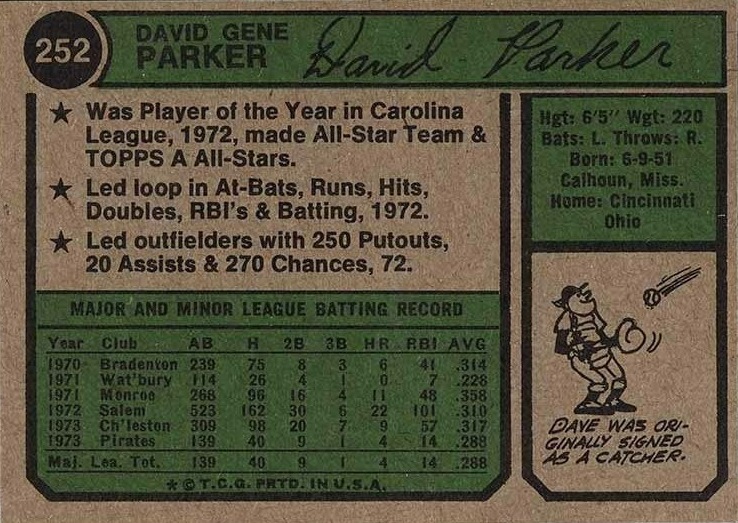 The 1974 set was one of those years when Topps proved that they didn’t care about the future eyesight of their collectors. Stats are in small black writing on a dark green background, which isn’t as easy to read in hand as it is in a scan, especially when the player had a longer career up to that point. Try checking out the Hank Aaron card in this set with 20 years worth of stats. It’s actually a good comparison piece to this card because Parker has those fun facts about his minor league stats above his actual stats. Since he was fairly new to pro ball, they included all of his minor league stats as well. Aaron has 20 years of big league stats. No fun facts, nothing about the minors, just big league stats. All of the players in the 1974 Topps set got a cartoon with another fun fact and they were all represented by a generic gray man who looked like no big league player ever.

Parker has been considered a future Hall of Famer since around 1986 when he had his second of two straight strong seasons with the Cincinnati Reds. If not at that point, then definitely by 1990 when he made his final All-Star appearance while as a member of the Milwaukee Brewers. Cooperstown has not come calling yet for him but it’s likely going to happen at some point. That fact has kept this card popular since back when he was still with the Pirates. This card recently ended in a PSA 9 for $570. This particular scan I pulled off of Ebay comes from an example graded PSA 7, which has a $250 price tag. Those are extreme examples, as most cards aren’t graded, and if they are it’s possible to find lower grade cards that look very nice. You can still get lower grade examples for as little as $5 delivered, but they are going to have worn corners, maybe creases or noticeable surface wear. My suggestion would be look for a slightly nicer example (ungraded) for about $15. This card changes hands often, with 290 sold auctions on Ebay in the last three months, and almost 100 live auctions currently up for sale. Happy collecting!