We are lucky enough here to have contributors from time-to-time, including a gentleman named Kevin Cummings, who is a 19th century baseball expert. He has posted four articles here in the past on the 1886-90 N172 Old Judge set, as well as one memorabilia article. I have linked all of his previous articles posted here at the bottom of this page. Today he looks at 1888 Alleghenys outfielder Sam Nicholl, who had a brief stint with the team, though he was actually around for just over seven months. This is an in depth look at Nicholl, along with a look at one of his poses/variations from 1889 that was included in the Old Judge set.

Here’s the card, so you can get a good visual of the man you’re going to read about below (back is blank). I’ll note that his name was often misspelled as “Nichols” back then: 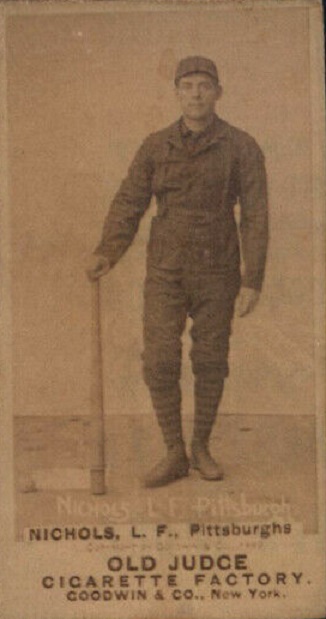 The Life of Sam Nicholl

Various Internet sources, and even his death certificate, list his birth date incorrectly, since according to his civil birth record, Archy Samuel Anderson Nicholl entered the world on April 18, 1865 in Tawneybrake, Ballymena, Galgorm, Antrim, Northern Ireland. We have no specific reason why his parents left Ireland when they did or why they chose Wheeling, West Virginia as their new home, but that is where they settled in 1866. Father William, mother Matilda, and 5 siblings lived on Fifth Street in the southwest part of the city in Wheeling’s Eighth Ward, close to many potential job opportunities. Initially, eldest son James was the only child old enough to work, but in short order, due to the death of their father, all the children began working. In spite of his tender years, Sam, like his brother, John, found a job at one of the glass factories nearby.

Wheeling was a hotbed of 19th century baseball activity where future major leaguers like home-towners Sam Barkley and Jack Glasscock cut their teeth in the late 1870s with a team named The Standards (after sponsor The Standard Publishing Company). Despite the need to contribute to the household income, Sam found time to get into organized baseball in his teens around 1883 with a reincarnation of The Standards, which in 1877 had become West Virginia’s first professional baseball team modeling itself after the Alleghenys of Pittsburgh, which had become that city’s first pro nine the year before. Nicholl and another local boy, future Hall of Famer Jesse Burkett, played with The Standards until 1886, after which Sam moved to the Wheeling team in the Ohio State League. That team was stacked with talented players like Jack Croghan (who led the league in hits), Thomas “Parson” Nicholson, and Jake Stenzel, but 22-year-old Sam held his own batting .331 and fielding at an .890 clip over 92 games played mostly in center field. Sam’s slick glovework was even highlighted in coverage of the May 11 game against Columbus in The Sporting Life when the writer said, “Nichol’s [sic] fielding was the prominent feature of the game.”

Unfortunately, the Ohio State League went belly-up at the end of the 1887 season, but in 1888 many of the better Wheeling players moved on to the city’s entry into the Tri-State League, the Nailers (named for another of the industries on the south side). In addition to carry-over talent like Croghan, Nicholl, Nicholson, and Stenzel, they added high-quality new players like Steve Brodie, Milton “Buck” West, and future Hall of Famer Ed Delahanty. The team started out like a sure champion, but when Delahanty moved on to the Major Leagues with the Philadelphia Quakers, it seemed to take all the wind out of their sails. They wound up in second place, 5½ games behind league champion Lima, but Nicholl led the league in runs with 112 and hits with 150.

Like the end of the 1887 campaign, by 1888’s season end all the teams in the Tri-State League were in dire financial straits. In the September 26 issue of The Sporting Life, one Wheeling columnist wrote, “It is further surmised that another club will pay a bonus for the release of Nichol [sic], our popular middle fielder.” That comment proved to be prescient. The Pittsburgh Alleghenys of the National League had five players out with injuries, carrying just a 16-man roster. The October 3 issue of The Sporting Life reported that Pittsburgh had “…captured right fielder Nichols [sic]…of the Wheeling Club…,” but they did not have to pay any transfer fee since the Tri-State League had disbanded by then. Another column said that “…Nichols [sic] was secured for his stickwork…” Sadly, that feature of Sam’s game this time failed him. In the eight games he played for the Alleghenys he managed but one hit, a single versus Boston on October 11, and hit for just an .045 average.

The October 10 issue of The Sporting Life reported that Pittsburgh had submitted their reserve list for the following season, but all columnists assumed that Nicholl was not on it. They were proved correct when the list was published the following week. Still, there was hope. Pittsburgh reporters were lobbying for him. One said, “…The man has hit the ball hard and one day Elmer Foster robbed him of a hit with a good catch. Nichol’s [sic] fielding is magnificent – couldn’t be improved upon. One day he nailed six flies…” Another reported, “…A good many are taken with the little fellow’s play. He is an elegant fielder and, no mistake, yesterday he made a brilliant catch…At the bat he hit the ball, but couldn’t get it safe…” Perhaps the positive press worked. The October 26 issue reported that Sam had been signed by Pittsburgh for the 1889 season.

Pittsburgh said Nicholl’s batting had been negatively impacted by a hand injury the previous October and they were expecting better things from him in 1889, but it did not work out that way. Despite batting .290 in preseason games, in the May 8, 1889 issue the Pittsburgh columnist of The Sporting Life said, “The axe has fallen. You can’t sell players like you used to, it seems, and yesterday the third man signed on speculation was given his ten days – I mean Sammy Nichol. [sic] Nick had become a great favorite and many thought he would be held…it was somewhat of a surprise when Nick was given his notice. Here is a man who will be a Class A man not very long hence. He will likely join some minor league and try another year’s schooling. Sammy has a future.”

Nicholl did, though, end up on an 1889 Old Judge baseball card as an Allegheny because he was on their preseason roster and still with the team when the photos were taken for the set. Since no other Major League offers were forthcoming, Sam played part of the summer with the new version of the Wheeling Nailers (even managing a few games there) and the other part with the Davenport Hawkeyes of the Central Interstate League. Though Nicholl fared well personally, batting .299 over 38 games, his bad luck team-wise continued as the Davenport entry disbanded on September 11.

It pays to know people and Sam knew Al Buckenburger as his manager with Wheeling in 1888. Buckenburger was looking for some good new players for his 1890 Columbus Solons American Association team and he signed Nicholl to a Major League contract. Things went very slowly for Sam at the plate in preseason games with under a .200 average, though his fielding was as good as ever. In fact, coverage in The Sporting Life of the April 11 game against the Cincinnati Reds specifically said that the feature of the game was Sam’s work in right field. Trouble, however, was brewing. Over the first five games of the season, Nicholl was very unlike himself – 0 for 17 with 4 errors. Sam got better over the next nine games, batting .257 with no errors, but the die had been cast. Whether or not his lackluster effort was intentional is unclear. The Sporting Life Columbus correspondent, F. W. Arnold, wrote of “internal troubles” gnawing at the success of the Columbus club. There was a rumor that some team members complained about captain Jack Crooks’ “disagreeable ways.” Apparently, some holdovers from the previous year’s team favored previous captain Dave Orr’s looser approach over Crooks’ firm hand. Management was determined, however, to keep Crooks at all costs. A “clique” of Al Mays, John Munyan, and Nicholl were released from the team on May 8. A week later The Sporting News reported that Sam had been signed by the Saginaw-Bay City Hyphens of the International Association. Sam also played that season with the Lincoln/Des Moines entry in the Western Association, but never played again with a Major League club.

Over the next eight years Sam played with eight different minor league teams. Nicholl’s work at the minor league and semi-pro levels was exemplary, compiling a .324 batting average. One must wonder whether his portrayal in the Columbus affair cost him another Major league opportunity. In his 20’s, Sam always thought of himself, first and foremost, as a Major League prospect. In versions of the Wheeling City Directory issued between 1888 and 1898 Nicholl listed his profession variously as “Ball Player,” “Base Ball Player,” and “Baseballist.” It was not until the 1901 edition that Sam finally reflected his move away from the game by claiming a profession of “Bartender.” For the rest of his working life, he was in the hospitality trade as either a worker, an operator, or an owner of a dining or lodging establishment, first in Wheeling until about 1918 and then in Akron, Ohio until he retired in 1931. Nicholl died of heart disease in 1937 at the home of his niece in Steubenville, Ohio. Appropriately, it was on April 19 – the opening day of that year’s Major League baseball season. He and his wife, Sarah Agnes “Aggie” Nicholl, are buried in Mount Carmel Cemetery in Wheeling.

Here are the other offerings from Mr Cummings: