I mentioned yesterday that I’d probably feature a card of Steve Blass here soon, so I figured that “soon” would be today. Blass turned 79 years old yesterday. He hasn’t been part of our Card of the Day series until today. I decided to start with the card that highlights his biggest game on the baseball field. In 1972, Topps included a subset in their regular issue set that covered the postseason. It was ten cards total, with one each for the ALCS/NLCS series, one for all seven games of the World Series, and a tenth game celebrating the Pirates victory.  We have already looked at the Pirates victory card, as well as NLCS card, but those articles were posted 6-7 months ago, so it’s time for another. This is the Game Seven card and Steve Blass takes center stage on this offering from Topps. 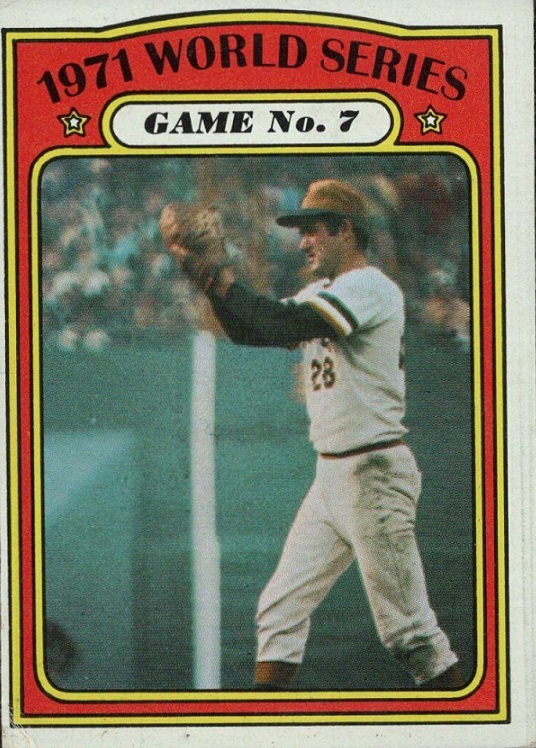 If you don’t know, Blass had a strong 1971 regular season, going 15-8, 2.85 in 240 innings. He made two starts in the NLCS against the San Francisco Giants and he struggled in both games, giving up a total of ten runs in seven innings. The Pirates won the NLCS without getting results from Blass, but he picked them up in the World Series. He pitched a complete game victory in game three, allowing just one run. He was handed the ball for game seven and he he threw another complete game, this time allowing one run on four hits and two walks, with five strikeouts. His performance helped give the Pirates their fourth World Series title. This card features Blass in action during his game seven outing. 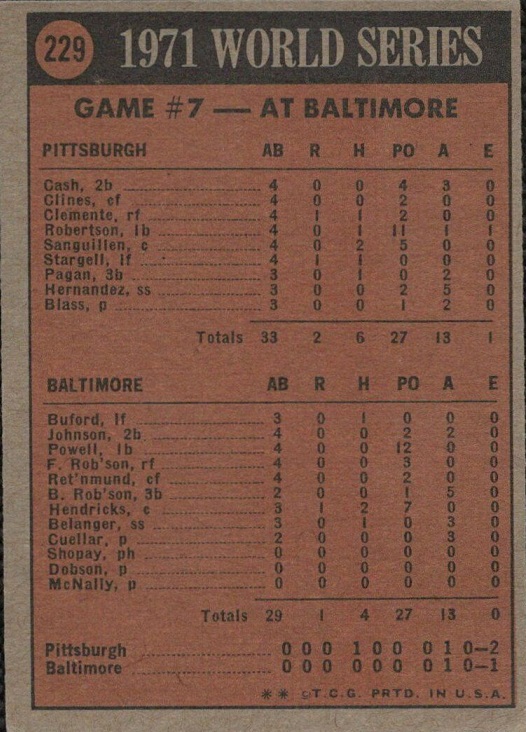 I really like what Topps did here with this back by just going with a boxscore from the final game.  There’s not even  a real giveaway that it’s Blass on the front. Sure you can assume it’s a pitcher on the front and then he would be the only option according to the boxscore, but look at that front again. You don’t see the mound. It isn’t exactly a typical pitcher pose on the front. The back doesn’t have any numbers for the players, so seeing his familiar #28 isn’t a dead giveaway. Sure you know it’s Blass, but I doubt every person who got this card knew it was him, even after looking at the back.

That’s quite a lineup for the Pirates when you have Willie Stargell batting sixth in the order. The Orioles lineup isn’t too shabby either, with Hall of Famers Frank Robinson and Brooks Robinson headlining the group, along with power-hitting Boog Powell. Look at the defense too in the infield. Brooks Robinson and Mark Belanger are two of the best defensive players ever, regardless of position or era. Davey Johnson was a Gold Glove winner at second base in 1971.

The Pirates got on the board first in this game with a solo homers from Roberto Clemente in the fourth inning. The difference making run came on an eighth inning double by Jose Pagan, which scored Willie Stargell.

If you’re interested in purchasing this card, you’ll be happy to know that it’s relatively inexpensive. There are some average grade options available for $3-$4 delivered, but you should be able to get a nice version for just a couple of dollars more. A PSA 8 of this card recently sold for $21. You could also look for people selling the entire ten-card subset.

John Dreker
Today’s Card of the Day comes from the only former Pittsburgh Pirates player who was born on January 29th. The…

John Dreker
Today’s Card of the Day comes from the 1954 Bowman set and it features Carlos Bernier, outfielder for the 1953…