I usually try to match the Card of the Day up to a player mentioned in the daily This Date in Pittsburgh Pirates History article, so apologies to the great Steve Blass and the other five former players you read about this morning. Sometimes cards catch my eye while I’m scrolling through Ebay and today was one of those times. I have never seen this 2018 Topps Archives Fan Favorites card of Bill Madlock, but when I did, I decided right then to feature it today. Steve Blass has never actually been featured in our Card of the Day series, strictly due to oversight, so I’ll get him here soon (possibly tomorrow?). In 2018, Topps issued their Archives Fan Favorites set, with autographed insert cards. One of those autographed cards was Bill Madlock, third baseman for the 1979-85 Pirates. Here’s a closer look at that card. 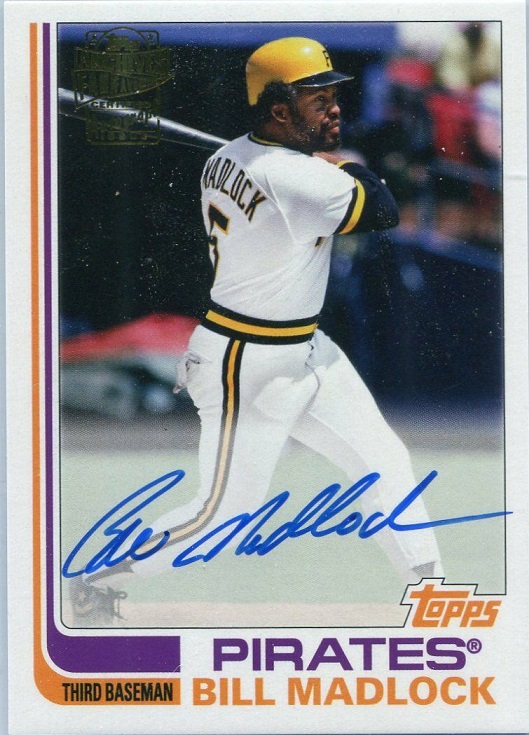 Topps used the same front design as their 1982 set. All of the Pirates in the set had the purple and orange hockey sticks on the left side, with the position in the orange blade. Next to the sticks, “Pirates” is in purple and the player’s name is in orange. It’s a great design look on the original cards, but it also looks great when they give you a new photo of the player on the card. A regular 1982 Topps Madlock had a closeup from the chest up, showing him looking off to the right, possibly in mid-conversation. I like this photo a lot better, a nice action shot of him poking a single to right field (probably). Madlock tops this card off with an excellent looking autograph. When you look it at, you’re not wondering who signed it, unlike many modern scribble autographs (if you collect them, you know how bad some of them are now). 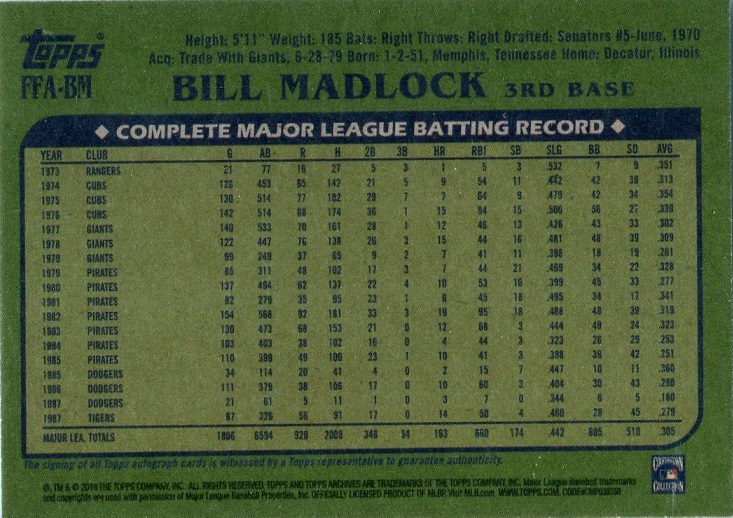 This is exactly what the back of 1982 Topps cards looked like, except for the legal mumbo jumbo at the bottom. I have mentioned often about how Topps had to be in cahoots with eye doctors everywhere and the 1982 set was the most glaring example. This particular Bill Madlock card is a great example because they decided to include all of his big league stats up to his final season in 1987. If you actually wanted to read those stats, typed in small blue print on a green background, you would give yourself a headache after looking at a few cards from the set. I recommend Baseball-Reference.com if you want to see Madlock’s stats. I like that they included all of his stats here. Some of the throwback cards only have stats up to the year of the card design (meaning 1982 Topps had up to 1981 stats), but Topps threw in the extra six years of stats here.

If you’re interested in purchasing this card, which I assume you are because it’s a great card, then get in your car and drive to Ebay, where there are numerous examples for sale. I’ll note that there are plenty of closed auctions to check for prices and they are all in the $8 to $12 range. However, just one of the nine active auctions is in that price range and I may or may not have bought that one already before you read this article. There are also chase versions of this card, which were produced in limited quantities. A purple border version has just 150 examples and goes for about twice the price of the regular. A blue border version is one of 25 and it will set you back $44. I always like the regular versions better, but if you like the others for their looks and/or rarity, then those are also excellent choices.