Today’s Card of the Day features Hall of Fame second baseman Frankie Frisch, who managed the Pittsburgh Pirates for seven seasons from 1940 through 1946. He was a player in the majors from 1919 through 1937, and not someone Pirates fans liked to see on the field, spending his entire 19-year career playing against them while with the New York Giants and St Louis Cardinals. He was a member of New York’s four-year run of World Series appearances in 1921-24, and he also played for the Gashouse Gang while in St Louis, a popular nickname for the team during the 1930s, specifically the 1934 team that won the World Series. All told, Frisch helped his teams to the World Series eight times. He was a .303 hitter in 166 games at Forbes Field. That was all forgotten by local fans when he took the helm of the Pirates and led them through the tumultuous war years of baseball, when good players were being lost left and right to the war effort.

Frisch was the manager for the Cardinals from 1933 until 1938, the first five seasons as a player-manager, and obviously he was the skipper during that World Series winning season in 1934. That gave Pirates fans some hope that he could bring them back to the postseason. They last made it to the World Series 13 years before he took over, and they last won it all 15 years earlier. As we know now, things didn’t work out for the best, but he put together five winning seasons, including their best record in the 32 seasons between World Series appearances (1928-59) when they went 90-63 in 1944.

Frisch was a popular figure in baseball, but he had just one card produced during his time in Pittsburgh. That’s because baseball card manufacturing basically stopped during the war years and didn’t pick up again until 1947 when Frisch was already out of Pittsburgh. So there aren’t many choices for featuring him here, though a few were produced in later years and might show up in our Card of the Day series down the line. Today we go with his 1940 Play Ball card. 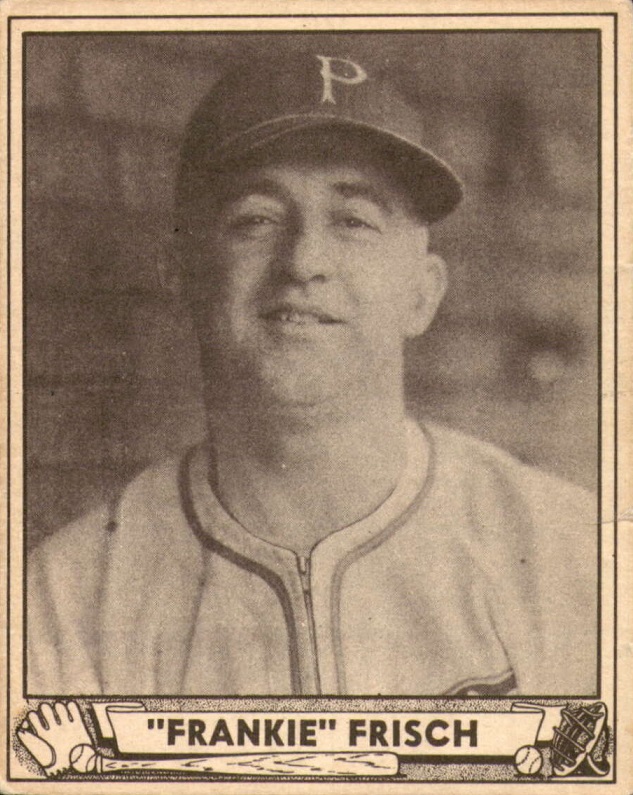 As you can see, Frisch is pictured here with the Pirates, so the Play Ball cards obviously came out a bit into the 1940 season. If you’ve been reading this feature often, or just know your baseball history, you know that most cards include photos taken from the previous year(s). That’s because some sets are released as early as December of the previous year (meaning for example, a 2021 set actually came out in 2020). A later release allows for a more accurate player/team checklist, so then you get cases like this card where they show the player/manager on the correct team.

The 1940 Play Ball set is a popular one with collectors. It’s a bigger set than many earlier ones grouped into the pre-war field of collecting. They issued the set in two series that totaled 240 cards, with Frisch among the second series cards, which is how they got him in the Pirates uniform. The set includes numerous Hall of Famers, including popular early cards of Joe DiMaggio and Ted Williams, as well as cards of retired Hall of Famers like Christy Mathewson and Honus Wagner. Shoeless Joe Jackson is also part of the set. The size and star power help the set a lot more than the design does, because it’s a rather colorless offering, using black & white photos and an off-white border, with one-color writing for the borders, baseball design and player name. 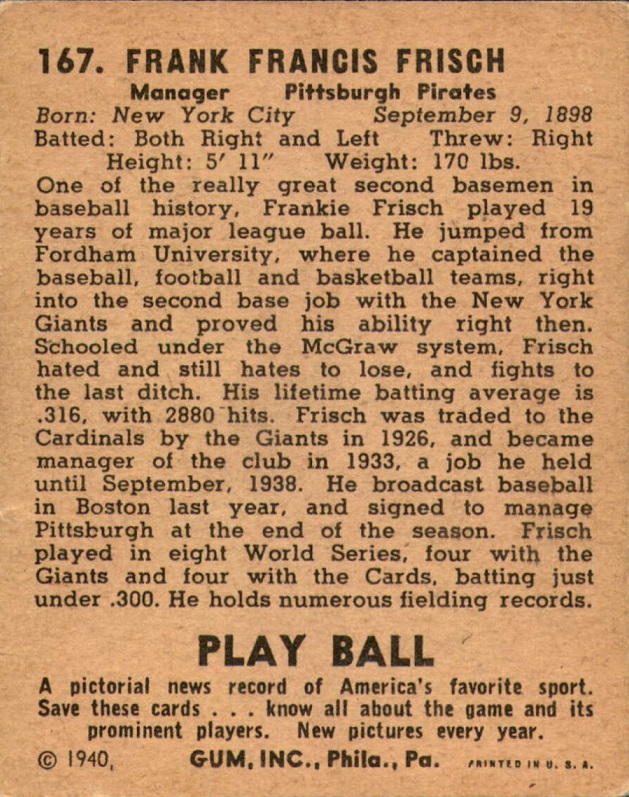 The back has a nice little bio section about Frisch being a three-sport athlete at Fordham University. If you know your Frankie Frisch history, you know his nickname was The Fordham Flash. It’s a nice little bio section, though it’s obviously tough to sum up a Hall of Fame card in a space that small. My favorite part is the bottom where they needed just a few more words to finish it out and they went with him holding numerous fielding records. Frisch ranks 40th all-time in defensive WAR and has one of the best seasons ever when he put up a 4.4 mark in 1927. That’s tied for the eighth best season in big league history and it is the best ever for a second baseman.

If you’re interested in this card, you’ll be happy to know that it’s relatively easy to find, but you’ll also be a bit dismayed to find out that it’s not cheap. The 1940 Play Ball set is popular and Frisch is more popular because of his Hall of Fame status. There are 13 examples available at the time of this writing on Ebay and they range from $32 for a well loved card, to $176 for a PSA 7 version. For more reference, two PSA 5 examples have sold recently for $68 and $79.