Today’s Card of the Day comes from the ever popular T206 set, which was produced between 1909 and 1911. Today’s feature card pictures infielder Ed Abbaticchio, a member of the 1907-10 Pittsburgh Pirates, who was born on this date in 1877 in Latrobe, PA.  He had two cards in the set. This one is the blue sleeves version. I’ll get into the differences between the two cards in the front/back descriptions. Abbaticchio was considered to be the first Italian-American star in baseball and possibly the first Italian-American in baseball period, debuting 26 years after the first Major League game. This particular card came out at the tail end of his career when he was just a seldom-used bench piece for the Pirates. He was a member of the 1909 team, though he played just 36 games all season, losing his second base job to some rookie named Dots Miller. 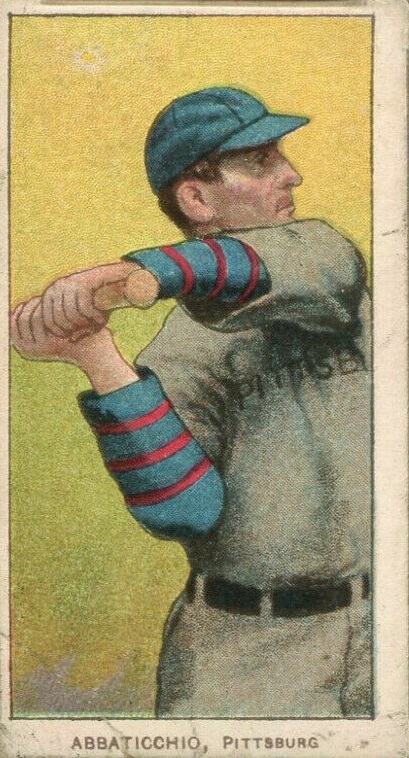 As mentioned, this is the blue sleeves version. The other Abbaticchio card also shows him in a batting pose, except he’s wearing a long sleeve road jersey, so to tell the two apart easily, that one is called the brown sleeves version. Many people refer to the shirt shown above as the candy strip shirt, which can be seen on numerous Pirates cards in the set. Notice the spelling of Pittsburgh with no H, which would change a short time after this card was printed, with 1911 marking the end of that 21-year period where they tried to be like everyone else. Also notice part of Pittsburg on the jersey. That wasn’t actually there, just a creative addition to cards in the set by the artists.

I mentioned that Abbaticchio may be the first Italian-American in baseball and that deserves a bit of an explanation, so here’s a quick one.  Lewis “Buttercup” Dickerson played in the 1870-80’s, including a time with the Pirates back when they were the Alleghenys. He has questionable Italian ancestry, based almost solely off his middle name being Pessano, which is a name of Italian origin. His current living relatives claim no Italian heritage in their family. Also, a semi-popular practice back when Dickerson was born was to give kids the middle name of the doctor who delivered them. Maybe he was delivered by a doctor Pessano, who knows.

Anyway, I’ve done research and have seen no mention during his era of Dickerson being Italian. Trust me, if you’ve ever read 1800’s newspapers, writers had no problem interjecting European heritage into their writing. If someone was Italian, Irish, German, etc, you knew it in no uncertain terms. Stuff that you would never see in print today. I’m not saying Dickerson wasn’t Italian, but Abbaticchio was definitely the first recognized Italian player in baseball, and it took quite some time for the first Italian player to show up, considering that baseball started many years before the majors were formed in 1871. His popularity among his fellow countrymen took off when he became a star player for the Boston Beaneaters in 1904-05. Pirates owner Barney Dreyfuss was actually quoted as saying that one of the reasons he added Abbaticchio prior to the 1907 season was to help draw fans from the large Italian population in the area. 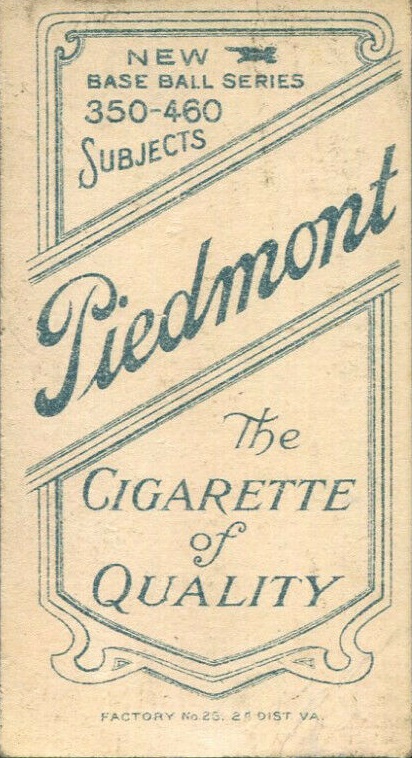 There are various cigarette/tobacco brand backs for this particular card, just as there are different backs for the brown sleeve version of his card. The two lists of available backs are not the same for both cards. The blue sleeve version was printed in a later series. The backs of T206 cards were the only hint of a possible checklist from back then and those didn’t turn out to be correct. The first printing series says “150 subjects” on the back. The second series says “350 subjects”, while the third series says “350-460 subjects” as you can see on this particular back. The actually count from the set was over 500 cards. All of the backs advertised cigarette/tobacco brands and Piedmont was by far the most popular brand as far as back ads go. If you see a random T206 card in a store, there’s a good chance that it has a Piedmont back.

If you’re interested in this card, it’s going to cost you more than most of the cards we feature here, but it’s not a bank breaker. T206 cards are very hot right now and any card that is even semi-tough to find has seen a price increase. If price is an issue, then stick to the easier brands of backs, because a tough back will send the prices really high. As a quick lesson, Piedmont is the best (at keeping the price down) for almost any card, but a Factory 42 Piedmont back will carry a bigger price tag. Sweet Caporal cards are also very easy to find (relatively speaking) and they will go for a lower price. Other available backs will increase in value based on their rarity. Anyway, let’s assume you just want one and don’t care about the back. Most available copies will be in similar condition to the card pictured. As you would expect, it’s not easy to find a mint condition card from the early 1900s. There are plenty of low grade examples out there that keep the price down. This particular card has ended for as low as $30 in low grade over the past three months on Ebay. As you get into graded examples, that adds to the price. The nicest one on Ebay in the last three months was a PSA 4 and it sold for $200. Right now there aren’t many for sale on Ebay. As of the time of this writing, there were just 13 T206 Abbaticchio cards for sale and seven of them were the brown sleeve pose. The lowest priced blue sleeve is $68 right now. Happy hunting!