Today’s Card of the Day celebrates one of the top highlights from “The Streak”, when everything seemed to go wrong for the Pittsburgh Pirates. However, on July 12, 1997, something went very right for the Pirates. Francisco Cordova threw nine no-hit innings, but the game went to the tenth inning with no score. Ricardo Rincon, who was born on this date in 1970, took over in the top of the tenth and held the Houston Astros hitless for another frame. In the bottom of the inning, pinch-hitter Mark Smith belted a three-run walk-off homer to give the Pirates the victory and Cordova and Rincon a combined no-hitter. In the 1998 Topps set, they made a card that featured both Rincon and Cordova, which is today’s Card of the Day. 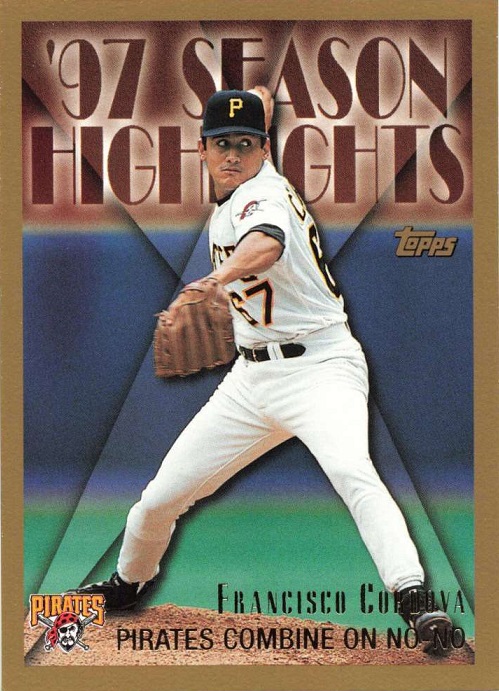 As you would expect, Cordova got the front of the card because he did the brunt of the work. Cordova was in his second season in the majors in 1997 and his first year as a full-time starter. You probably know that the team was called the Freak Show that year because it was a low payroll group that competed throughout the year for the pennant, falling just short late in the year. Cordova was a big part of that team, going 11-8, 3.63 in 178.2 innings over 29 starts. Just 19 days before the no-hit game, he threw his second shutout of the season. He was facing the same Houston Astros team that he no-hit, and he held them to just two hits that day. So the Astros ended up getting two hits in 18 innings against him during that three-week stretch. In fact, if you go back to that first game, then ahead to his next meeting with Houston, he had had 16.1 straight no-hit innings against them.

I like the 1998 Topps set with that dark, solid color border and the Pirates logo in the bottom left corner. The one drawback was the writing on the front, which blended into the background on a lot of cards in the set. The regular issue cards in the set had a box at the bottom for the player’s name, but some of those were dark writing on a dark background. Look at the middle of Cordova’s last name here and realize that this scan is a lot bigger than the card in hand. Yeah, the real card is difficult to read. 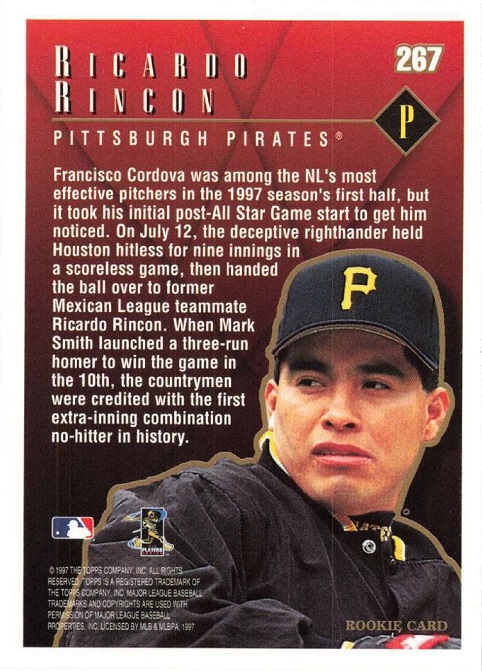 As you would expect after seeing the front, there’s a photo of Rincon on the back. One interesting thing is the note in the bottom right corner. It says this is a rookie card for Rincon. When have you ever seen a rookie card for a player who wasn’t actually on the front of the card? It’s not even a great photo for him, as most of the back is a quick recap of the no-hitter. The only mention of Rincon during that recap is when it says that he was handed the ball after Cordova threw nine no-hit innings. While it’s implied, there’s no mention of his inning or the fact that he got credited with the win. Heck, even Mark Smith got a better mention and he isn’t even on the card.

This is a common card and it’s somewhat easy to find on Ebay. There aren’t a lot of listings because it’s not a popular year for collectors or a popular card, so most dealers won’t list it individually. There are no sold examples on Ebay in the last three months. That’s all good news for you if you’re interested in picking up a copy. You can find examples for $2 delivered from multiple sellers.