Today’s Card of the Day is just the second card that we have featured here from the 1966 Topps set, and we still won’t have a solo player card yet with this addition. The first one was the 1966 National League Batting Leaders card featuring Roberto Clemente, Hank Aaron and Willie Mays. Today’s card is a 1966 Rookie Stars card with two left-handed pitchers from the Pittsburgh Pirates, Luke Walker and Woodie Fryman. Walker pitched two September games for the 1965 Pirates, while Fryman, who was born on this date in 1940, had yet to make his big league debut. 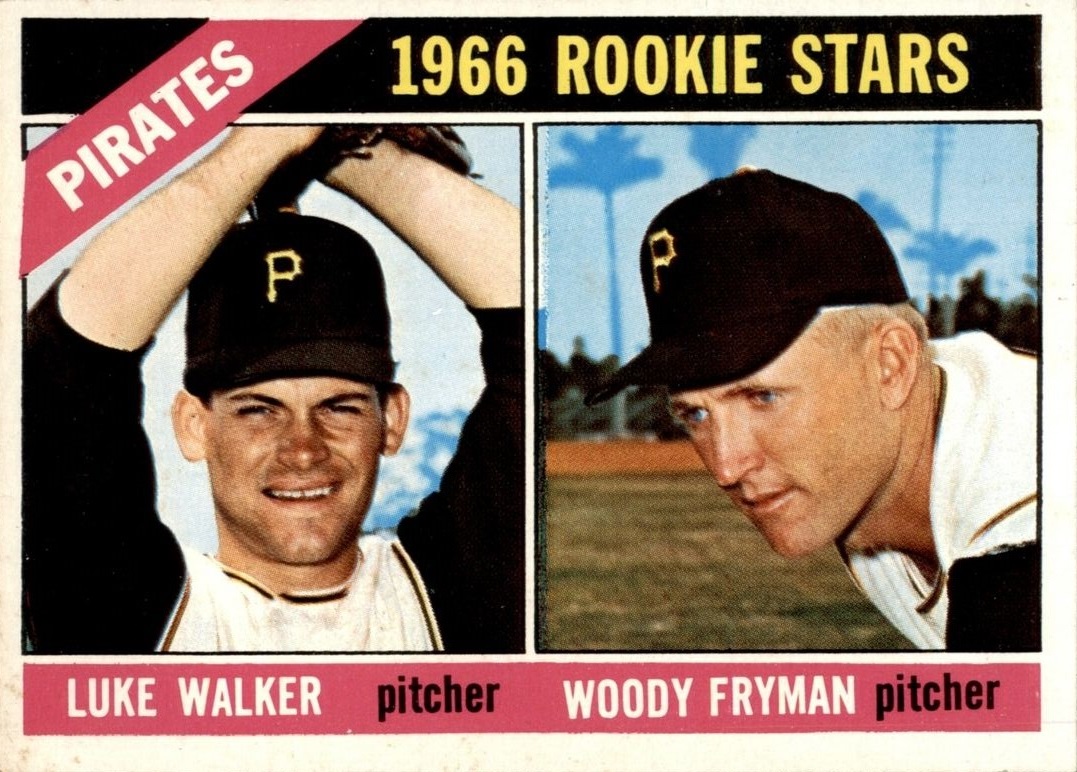 The first thing to note on the front (and back) of this card is that Topps called Fryman “Woody”. His real name was Woodrow, but the spelling of his nickname/informal name was Woodie. I’m not a big fan of the pink panel at the bottom for name/position, which might be why I haven’t featured a solo card from this set yet. All of the Pirates cards in the set used pink for the name/position and also the team name that you see in the upper left corner. I am a fan of when Topps matched the front design to the team colors, which they occasionally did. Other times they went rogue and used random colors for teams. My guess is that they flipped a coin to decide. It’s the only logical explanation.

Topps had all different approaches to rookie cards over the years, but the two teammates side-by-side was the preferred method in 1966. There were plenty of them in the set that year, including a second (actually first if you go in numerical order) one featuring two Pirates, Jerry May and Frank Bork. The Fryman/Walker card turned out a bit better, though May played parts of ten seasons in the majors. Fryman had a long career that saw him win 141 games and save 58 games, while Walker pitched nine years in the majors and he had a 15-win season for the Pirates in 1970. 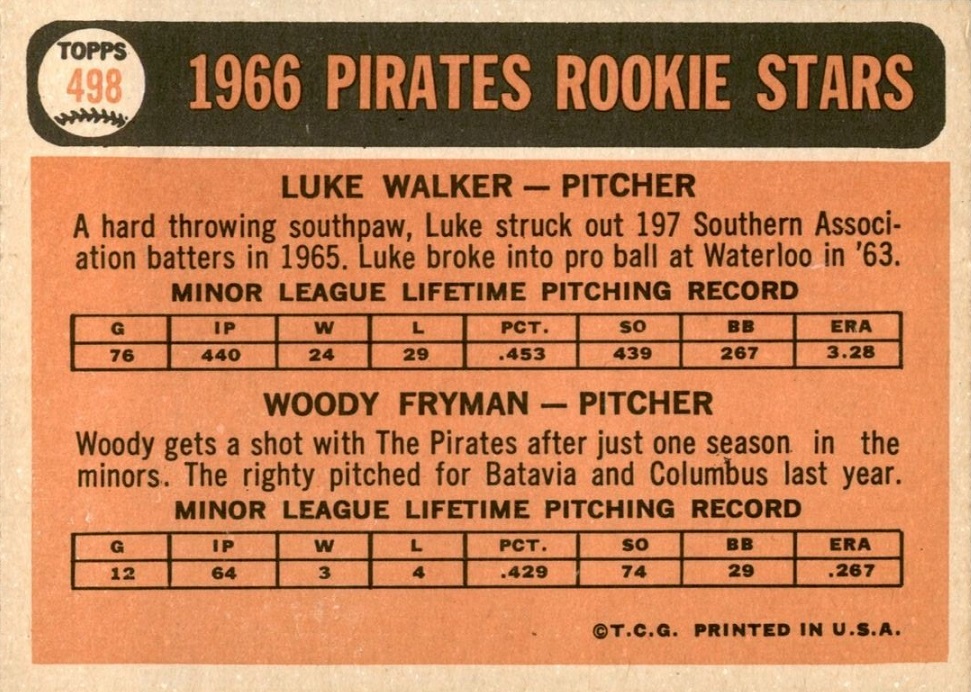 The back of the card gives the career minor league stats for each player. You might notice a mistake in Fryman’s line, even if you have no clue about his minor league pitching. Imagine a 3-4 record with an 0.27 ERA? Sounds impossible, but it’s still pretty bad considering that a losing record with a 2.67 ERA (his actual ERA) shouldn’t happen. It’s interesting to note that they decided to just go with minor league stats for Walker and not even mention his September games in Pittsburgh. Walker was 22 years old at the time, while Fryman was 25 years old in 1965, playing his first season of pro ball. He signed late because no team would give in to his bonus demands.

This card is not an easy one to find on Ebay compared to many cards from the set. That usually happens when a card is from the high number series, which are cards printed later in the year, so they didn’t get into many packs. It’s surmised that most kids lost interest by the end of the year and Topps didn’t sell as many, so they didn’t print as many. However, this card isn’t a high number card, so it should be a bit easier to find. There are currently 20 examples on Ebay right now, and 21 completed auctions in the last three months. They have sold for as little as $4 delivered, but those are for low grade examples. An average price for a decent ungraded copy is about $10. High grade graded examples have sold for as much as $92 and $104 for PSA 9 cards, and $55 for the lone PSA 8.