Today’s Card of the Day features outfielder Turner Ward, who spent the 1997-99 seasons with the Pittsburgh Pirates. Even if you don’t remember his name, you have seen his career highlight. On May 3, 1998 he went through the outfield wall at Three Rivers Stadium making a leaping catching on a drive by Mike Piazza. Today is Ward’s 56th birthday, so that (birthday) is the main reason why most players show up here in this series on a specific day. I was hoping some card captured Ward crashing through the wall, but if it exists, no one was selling it on Ebay. Instead, I went with his 1999 Stadium Club card for two reasons. The first reason is that we haven’t featured the 1999 Stadium Club set here yet. The second reason is the great photo on the front of the card. It’s no “crashing through a wall”, but it’s still a terrific action shot. 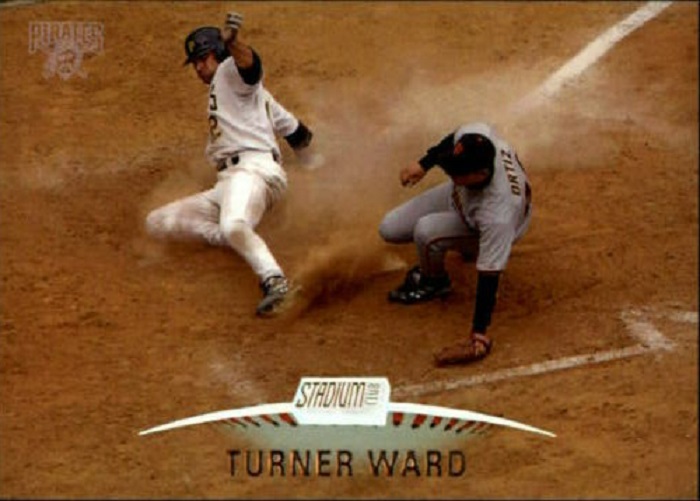 One of my favorite things about cards is when you can figure out the exact date the the photo was taken. It’s even better when you can pinpoint the play. This particular play was from the bottom of the sixth inning on April 23, 1998. Ward doubled, then moved to third base on a sacrifice fly by Jason Kendall. Russ Ortiz came on in relief and struck out Kevin Young for the second out. During Jermaine Allensworth’s at-bat, Ortiz’s 0-1 pitch hit off of the glove of catcher Brian Johnson and got away. The passed ball allowed Ward to come home from third base to make it 7-0 game. This photo is the result of that passed ball by Johnson. The home/away jerseys helped narrow this down to the only 1998 game that Ortiz (who debuted in 1998) played at Three Rivers Stadium that year. Even without the jerseys, Ortiz only faced the Pirates one other time at Candlestick Park and Ward didn’t reach base against him.

The borderless design looks great with this particular photo. It’s a very simple design from Topps, who was the one to release Stadium Club.  They have a Stadium Club logo above the player’s name, and the team’s logo is in the upper left hand corner. They leave a lot of room for the photo itself to take center stage. 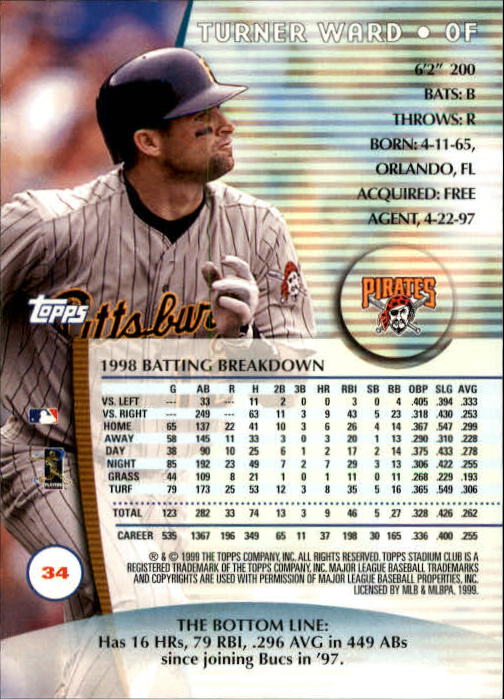 The back adds an extra photo of Ward and they repeat the top logo, which is very subtle on the front. What I really like here, and don’t like at the same time (yes, that’s possible) is the breakdown of his 1998 stats. They show you his lefty vs righty stats, which tell you that he barely saw left-handed pitching in 1998. They also show home vs away, day vs night, and grass vs turf. Basically, if Ward could have played his entire career at Three Rivers, while only play day games and only facing southpaws, he would be in the Hall of Fame. What I don’t like is the fact that the large breakdown section leaves room for just his 1998 and career stats. Using Ward as an example, that means we are missing eight years of stats. The bottom has a note about his stats since joining the Pirates, but without the year-by-year breakdown, you don’t know who he played for before coming to Pittsburgh. Obviously you know that already because you read his bio this morning on our site, but people getting a card in a pack back in 1999 might not know when he came from prior to the Pirates. Basically, I both like and dislike the choice of stats here because it’s something different.

This card isn’t rare, but there are only 11 options for it on Ebay and only one of them (at the time of this writing) could be had for under $4 delivered. All of them have higher shipping costs than card costs. However, one seller has one that can be had for $1.74 (plus tax if applicable), so if you want this card, go get that one example before someone else does. Make the late birds pay the higher shipping cost.