This is the first time that Lee Lacy has been featured in our Card of the Day series, which began 13 months ago. I’m a bit surprised that I haven’t had Lacy here yet, as he spent six years with the Pittsburgh Pirates, and he was a member of the 1979 World Series champs. While it was just an oversight, it also allowed me to pick from any of his cards available, which mostly consisted of six years of Topps cards and four years of Donruss and Fleer cards. Whenever I pick a card for a player I go through scans and try to find something that catches my eye. The 1983 Donruss card was the one I decided on for Lacy for that particular reason, but it also serves a second purpose. This is the first card from the 1983 Donruss set that we are featuring here. So this is our “two birds with one stone” Card of the Day article for the week (not really a weekly thing, but I try). 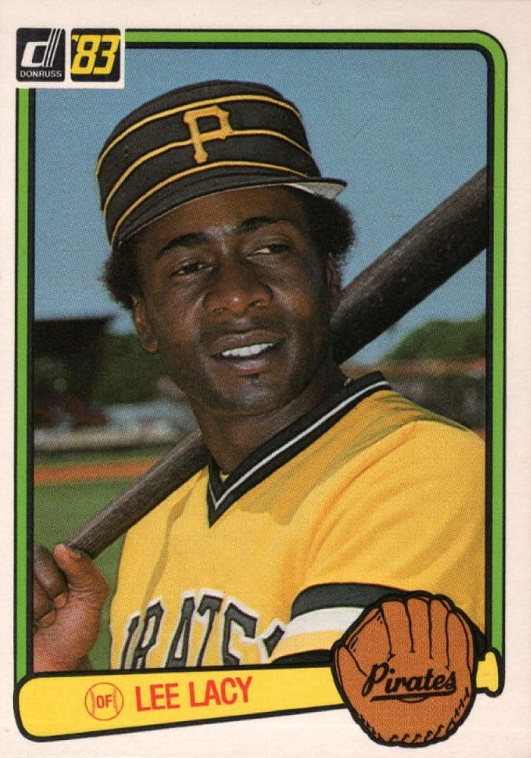 Donruss didn’t really change much from one year to the next between 1982 and 1983. They are very easy to tell apart because of the year being in the top corner for both years. However, they had almost similar layouts, with the year and logo in the top corner both years, as well as the name/position written in a yellow bat at the bottom for both years. The main difference in the years really wasn’t a huge difference either because they had the same general idea. You can see on this card that “Pirates” is neatly written on the inside of a glove. In 1982, Donruss did the same thing with a baseball instead. Their “big” switch was moving the place of the team name from the left side (1982 baseball) to the right side with the 1983 glove. That general lack of originality made this a very bland set, which was only helped out by the inclusion of rookie cards for Wade Boggs, Tony Gwynn and Ryne Sandberg.

For Lacy in particular, I’m guessing it was just the uniform that caught my eye because he has some better action shots in other sets. If you don’t love the gold tops and black pillbox caps, then you’re probably just here for the cards and may not have realized yet that they all features players for the Pirates. 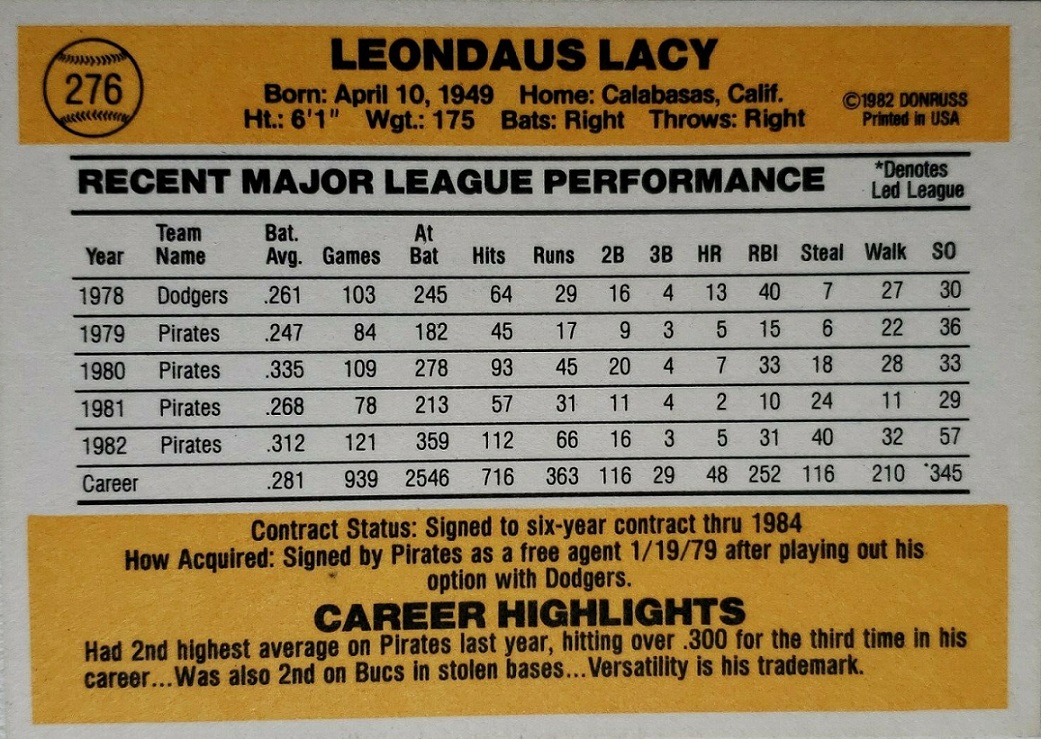 Donruss didn’t have originality with the front of cards in 1983, but they really strayed from the 1982 backs in the new year. They changed the background color for the top and bottom strips from blue to gold….and that’s about it. They used the same exact setup, bio/stats/highlights in the same order, mostly white background, five lines of stats (if available) and black writing. The blue boxes in 1982 used white writing, so that was a little different, and they also included the “contract status” and “how acquired” lines, while provided less in the career highlights section. I can’t imagine how quick the meeting was to decide the changes for 1983, but it all worked out well for Donruss thanks to the player interest.

As you can see by Lacy’s stats, he had some impressive seasons as a platoon player. He hit .335 during the 1980 season, followed by a .312 average and 40 steals in 121 games in 1982. During the 1979 season, he was an occasional starter in left field, but mostly hit off of the bench. He pinch-hit four times during the World Series.

If you’re interested in this card, Lacy is a common and it’s easy to find. You can get it delivered for as little as $2. There are a handful of autographed cards available, most of them for under $10 delivered.