After the 1935 season ended, the Pittsburgh Pirates acquired veteran catcher Al Todd in exchange for catcher Earl Grace and pitcher Claude Passeau. The Pirates received decent production from Todd over three seasons before packaging him for catcher Ray Mueller. That second trade didn’t work out for the Pirates, but by the time that the second trade occurred, the 1935 deal was beginning to look very bad. Sure the Pirates got slightly better production from Todd over Earl Grace, but it was a small margin. By the time the dust settled on the first deal, the Pirates realized that they gave up a pitcher who could have been a mainstay in their rotation for more than a decade. Not only that, they gave up on him after one game. Here’s the story of right-handed pitcher Claude Passeau, highlighting his brief time in Pittsburgh.

Passeau got a late start in pro ball due to his decision to attend college. He played semi-pro ball for a few years during his college time and even had an extremely brief stint in pro ball that he ended after just nine days, but his career really didn’t get started until the 1932 season at 23 years old. He was a multi-sport star in college, excelling at baseball, football, basketball and track, but his lack of concentrating on baseball left him as a raw pitcher by the time he reached pro ball. He threw hard, but he was more of a thrower than a pitcher and it showed on the mound. From 1932-34, he played for seven different teams in the minors over four levels of ball. He made it to A-Ball twice, a high level at the time, but each time it was a brief trial and he pitched poorly. He was hurt by his control and the fact that his curve and changeup both needed work.

Under normal circumstances, you wouldn’t worry about a guy not performing well at the high level of the minors after just three seasons, but his late start in pro ball put a little added pressure on him to start showing some results. Those results started coming during the 1935 season while pitching for Des Moines of the Western League, a strong level of play at the time. He won 20 games that season and racked up 239 strikeouts in 244 innings. More importantly, he started throwing more strikes. He spent the entire Western League season with Des Moines, but the Pirates liked what they saw months before he joined the team on September 16th in Pittsburgh for the final ten games of the season.

On July 26, 1935, the Pirates announced that they had purchased Passeau’s contract from Des Moines. It was later reported that the price was $10,000. Passeau was 6’3″, back when the Pirates had just one taller pitcher (Jim Weaver), which earned Passeau the headline “Young West League Giant Pitcher”. He came highly recommended by Des Moines manager Otis Crandall, who was a pitching coach for the Pirates one year earlier. At the time, Passeau was just coming into his own. He had a 10-8 record, with 45 walks and 116 strikeouts in 134 innings. Over his last 110 innings after the purchase, he picked up another ten wins, walked just 28 batters, and accumulated 123 strikeouts. Getting him before he finished strong likely saved the Pirates some cash in the deal. At the time of his announced signing, the Pirates also said that he would join his new big league club at the end of the Western League season.

Besides a recommendation from Otis Crandall, the Pirates also had their scout (and former outfielder) Bill Hinchman follow Passeau around before signing him. Before the Pirates made the deal to acquire Passeau, Hinchman filed a report that said that the young hurler (thought to be 24 at the time, though he was actually 26 years old) threw hard and had an excellent curve. His control was good, but he wasn’t a finished product. Hinchman ended his report by saying that Passeau was “one of the very best prospects he has scouted in a long time”. The Pirates should have taken that part about him not being a finished product to heart, because it would have helped them in the long run.

While he had a big introduction in the local papers in July, the man they called “Passo” wasn’t mentioned often before he joined the Pirates on September 16th. In fact, the only time his name came up in local papers through all of August was when it was mentioned that Mike McNally, who managed the Williamsport Grays of the New York-Penn League, released Passeau just one year earlier. It was more of a jab at McNally, saying that he lost out on a prospect who was good enough for the majors, giving him up for nothing after only one game.

On September 5th, the Pittsburgh Press had a small note that said that Passeau’s arrival would be delayed due to his Des Moines team making the playoffs, but he was told to report to the team as soon as possible. The local papers actually talked more about a young hitter named Bernie Cobb, who was set to join the Pirates soon after hitting .382 with 52 extra-base hits for Fort Wayne of the Three-I League. Just days later, Cobb said that he would return home instead to attend college and then join the Pirates during the following Spring Training. Unfortunately for Cobb, he gave up his lone chance to play in the majors. He was the final cut during Spring Training in 1936 and played in the minors until 1942 without making it back to the show.

On September 10th, the Pittsburgh Press once again mentioned Passeau, this time in a story about the Pirates stocking up on pitchers with high strikeout numbers, saying that Passeau was the third to join the team behind Cy Blanton and Clarence “Steamboat” Struss. The locals also got their first look at Passeau (sort of) in this low quality black and white photo posted that day: 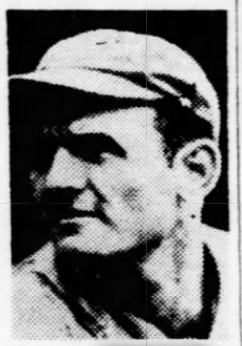 After Passeau joined the Pirates, it was pretty much quiet on the news front while he worked out with the team. The only mention during his first nine days was that he ended up being the only 20-game winner in the Western League in 1935. The Pirates won all four games against the Boston Braves during his first four days with the team, then they went on the road to finish out their season schedule, with games against the Chicago Cubs, St Louis Cardinals and Cincinnati Reds.

On September 26th, the Pirates and Reds played an in-season exhibition game in Union City, Tennessee. Passeau got a chance to pitch against Major Leaguers for the first time. He took the final three innings of the game and he limited Cincinnati to one run in the 8-2 victory. His actual big league debut was just around the corner.

Passeau got the start in the final game of the season, pitching game two of a doubleheader on September 29th. After not pitching for nearly two full weeks, the Reds saw him for a second time in three days, and this time it was in a game that counted. The added look probably helped, as they got to him for four runs in his three innings of work. He gave up seven hits and two walks. Not only was this the only real game for Passeau while he was with the Pirates, his catcher was Aubrey Epps, who was also playing his one and only game for the Pirates. However, while Passeau struggled, Epps had a huge day, going 3-for-4 with three RBIs. That turned out to be his only Major League game, though Epps spent a lot of time with the Pirates, as noted here in his Obscure Pittsburgh Pirates article.

While Passeau’s only big league game didn’t go well, his off-season went a lot worse. On November 15th, Passeau’s father was shot to death at 60 years old during a quarrel with a man named JC Cunningham. Just two days earlier, the elder Passeau was arrested for trespassing, getting into a dispute with the same man.

Just six days later, Passeau was on his way to Philadelphia in the aforementioned trade. Pie Traynor wanted a strong starting catcher and wasn’t satisfied with the work of Earl Grace as a starter. Not only did he include Passeau in the deal, the Pirates also put in $25,000 in cash to get the deal done. It was a risky trade and it didn’t go well for the Pirates. They were sure that it would help them in the standings, but they went from 86-67 in 1935 to 84-70 in 1936, finishing in fourth place each year. Todd was an improvement over Grace, but that would have only been a good trade-off if all they also included was the cash. Passeau was an immediate quality starter with his new team, even though he was playing for a perennial cellar dweller in Philadelphia.

After the trade, Passeau was given a lot of work with the Phillies. He threw 748.2 innings during the 1936-38 seasons, then another 53 innings in 1939 before being traded to the Chicago Cubs. In 1937, he led the league with 292.1 innings. His 38-55 record in Philadelphia tells you more about the team he played for, rather than they work he did for that team. If he pitched the same with the Pirates, that record would have likely been flipped. Passeau put up 10.4 WAR in his 3+ seasons in Philadelphia, but he was just getting started.

The Pirates gave up a five-time All-Star after one game. From 1936 until 1946, he put up 45.0 WAR. In franchise history, only three pitchers put up more WAR, led by Babe Adams at 50.4, then Wilbur Cooper at 48.2 and Bob Friend at 47.6. Passeau’s average per year during that 11-year stretch (4.1 WAR) was better than any of those pitchers, with Cooper coming closest (3.7 WAR average) during his 13 years with the team. Basically, we are talking about the Pirates possibly giving up an all-time great pitcher in team history to get a catcher who put up 4.1 WAR in three seasons in Pittsburgh, not to mention that Grace was slightly above average as well for his two seasons in Philadelphia. They won the catcher part of the battle, but the war was a one-sided loss.

That makes pitcher Claude Passeau, The One Who Got Away.