Today’s Card of the Day features an obscure set from the 1986 that has a great card of Pittsburgh Pirates pitcher Rick Rhoden. After the 1986 season ended, Donruss put out a set of 56 cards that showed highlights from the entire season. They focused on awards, both monthly and yearly, as well as league leaders in categories. There were also some random ones, such as a Bo Jackson card celebrating him hitting the longest home run at Royals Stadium. Today’s Card of the Day is #20 in the set and it takes a look at the impressive pitching performance by Rick Rhoden in June of 1986, but maybe the focus of the card should have been on his bat instead. 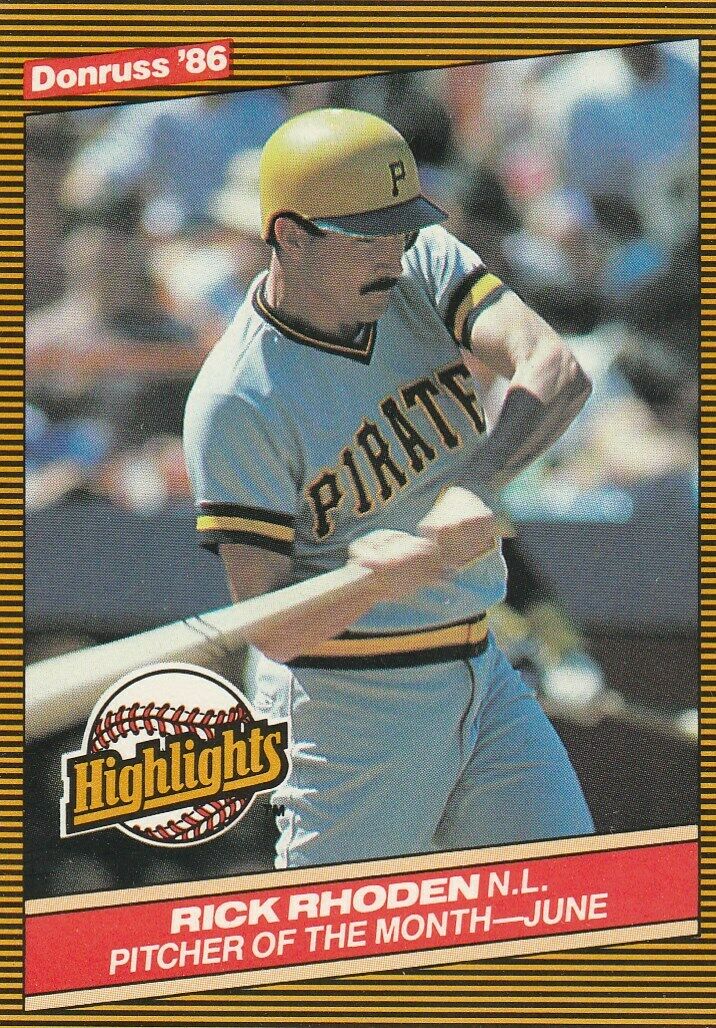 The real highlight here is that Donruss decided to use a batting photo of Rhoden. He was known for his hitting, so it’s not a surprise that a card manufacturer would picture him as a hitter on the card. The odd part about that decision is that this particular card is highlighting his pitching ability. The card on front mentions that he was the National League Pitcher of the Month for June, yet we see him swinging a bat. For the record, Rhoden batted .474 in June of 1986, going 9-for-19 with three doubles and four RBIs.

In 1986, Donruss used a very similar front design for their regular issue set, but the regular set had blue and black stripes, while the Highlights set had gold and black. Both sets used the same angle cut photo design on front. On the back of the regular series from 1986, Donruss used a light blue background and black writing. The Highlights set used a gold background on the back. 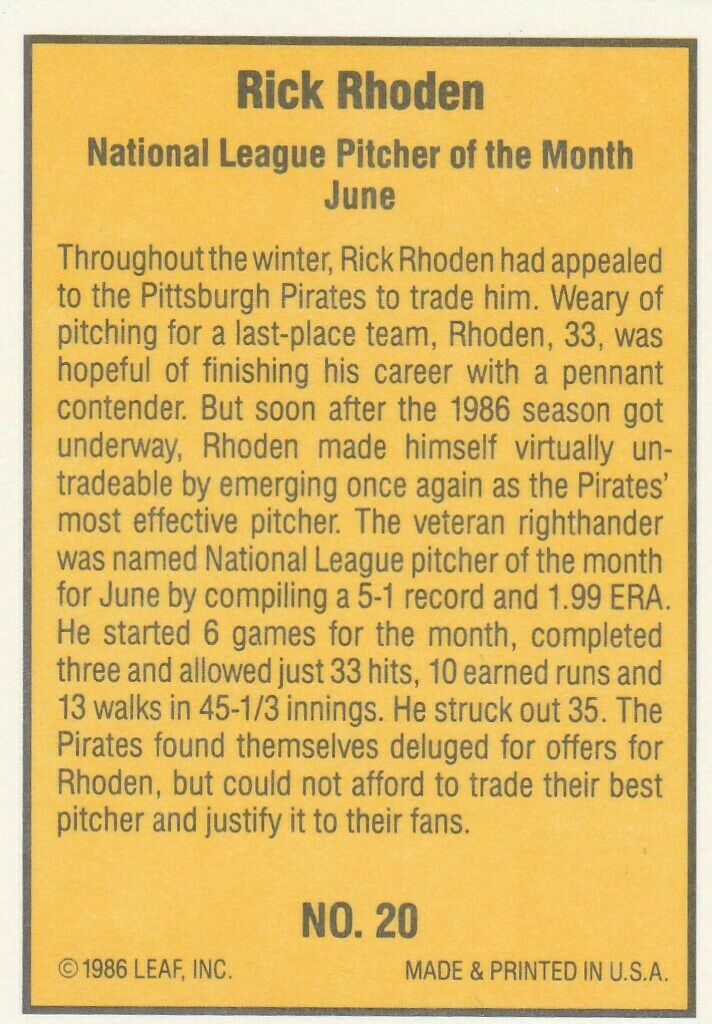 If you thought the front of this card was great, the back is even better. You have to love the bluntness from Donruss in this write-up, right from the start. Sounds like a bitter Pirates fan, a whole seven years removed from a World Series title. He was weary of pitching for a last place team and appealed to the Pirates to trade him, but then he started doing great, including the month of June when he went 5-1, 1.99 in 45.1 innings, earning him Pitcher of the Month honors in the NL.

The back mentions that the Pirates couldn’t afford to trade their best pitcher and justify it to their fans, but by the time many people were reading this back information, Rhoden had already been traded to the New York Yankees. I believe Pirates fans were eventually okay with getting Doug Drabek back in the deal. It also doesn’t make much sense to say that they couldn’t afford to trade him when he was at his peak. That’s the perfect time for a last place team to trade someone.

If you’re interested in this card, you can get it on Ebay for about $2 delivered, with many options around that price range. There are also some autographed versions that cost slightly more. Might I suggest two other things before you head over there. There are a couple of sellers who also have Johnny Ray in the same lot as Rhoden. Ray won the April Player of the Month award. He’s also the only other Pirates player in the set, so you can get the pair together and it won’t cost much more. My other suggestion is to just get the whole box set. It’s 56 cards, some greats from the era, plus some Hall of Fame cards, and you can get it delivered for under $10. Whatever you choose, happy collecting!