Today’s Card of the Day features a Hall of Fame pitcher who spent three seasons with the Pittsburgh Pirates. This is the second time Bert Blyleven appears in this series and I don’t expect it to be the last. The first time he was the subject of an article was an interesting comparison between his 1981 Donruss and 1981 Fleer cards and how much different he looked on the cards. That article was posted on the anniversary of the Pirates acquiring Blyleven. Today’s article comes on his 70th birthday. Here’s card #74 from the 1978 Hostess set featuring Bert Blyleven. 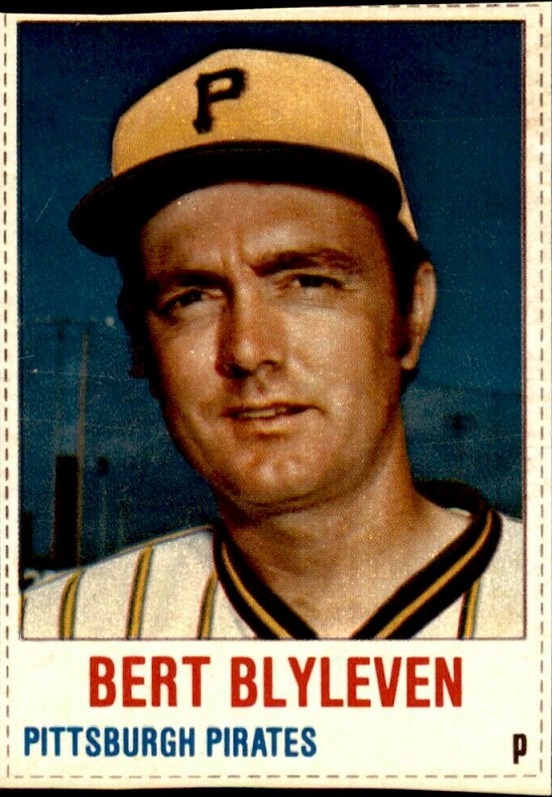 I was going to crop this scan better, but I decided to leave it as is to show how cutting these cards off of the back of boxes could go wrong. You can see the dotted lines to help guide cuts. A majority of the ones you will find now have a lot of white showing on the outside of those dotted lines. Anything extra is fine, but the problem here is the top left corner. They cut into the border, which means that this card wouldn’t grade. It’s considered to be trimmed, even though all of these cards are technically trimmed. The term “trimmed” just tells you that the card is smaller than the standard size.

If you didn’t know by looking at it, this card has been airbrushed to show Blyleven on the Pirates. He only joined the team in December of 1977, so Hostess didn’t have time to get a new photo before this set came out. They actually did a great airbrush job relatively speaking. As you probably know, Topps has some awful examples from the 1970s. I’m sure many of you didn’t notice the airbrushing before I said it. There was a dead giveaway though. That particular cap style ended in 1975, so it wouldn’t be shown on a player who played his first game with the team in 1978.

This card came in a panel of three cards, which featured Ken Singleton and Hall of Fame first baseman Willie McCovey. Usually you only see the three card panels side-by-side-by-side. However, there’s a very interesting auction on Ebay right now with a different layout. Someone kept the whole bottom of a box together and this beauty was the result: 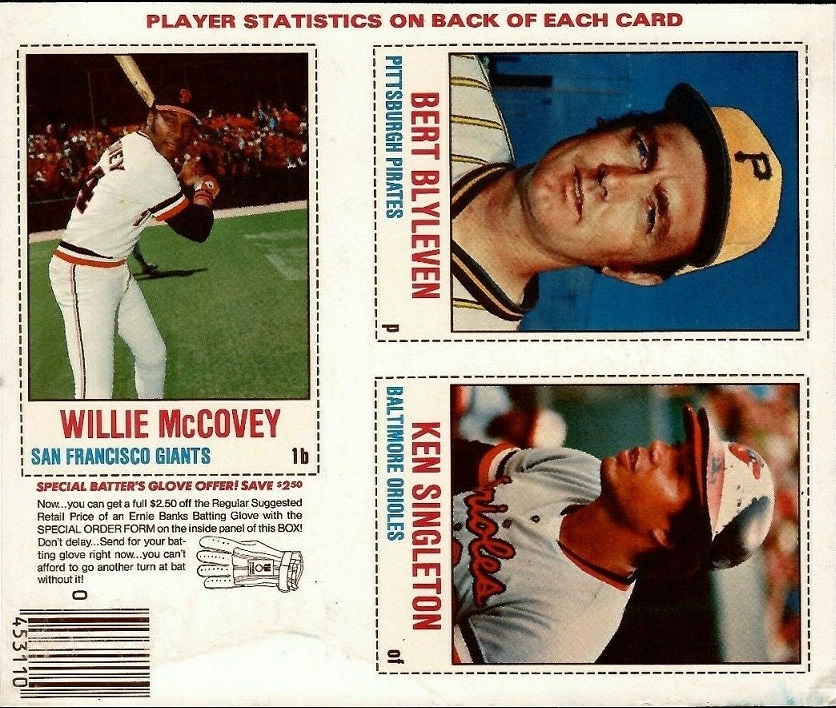 I like the third mention of a Hall of Famer in the batting glove offer. Shout out to Ernie Banks, one of the all-time greats. This back panel shows you exactly how much room people had to work their magic with the scissors.

Here’s the back of the Blyleven card: 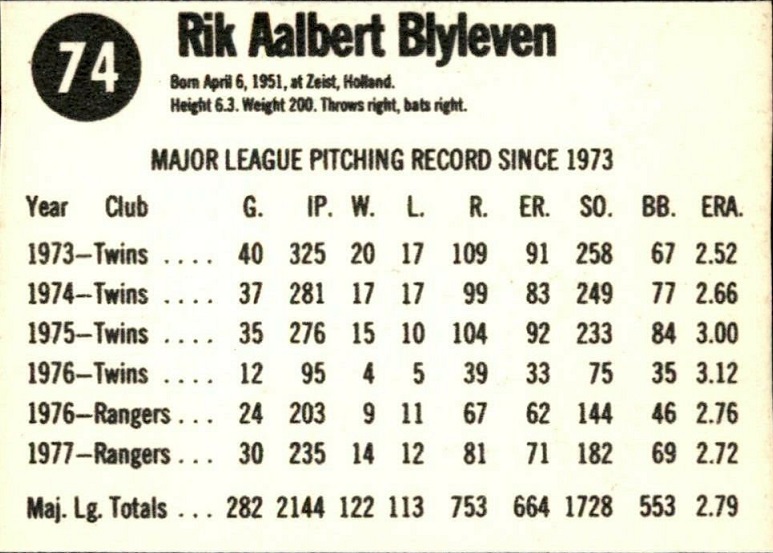 Hostess cards have a very simple back design. All of the writing is black, and they are printed on a plain white background. They keep it simple with the stats, listing nine categories. In comparison to 1978 Topps cards, they have the same nine statistical categories in the same exact order. Topps would soon expand to include games started, complete games, saves and shutouts. As you can see here, Blyleven had some impressive numbers despite a record that was barely above the .500 mark. That was more of a by-product of the teams he played for until he got to the Pirates, though his winning percentage with the Pirates was only slightly better. The strikeouts are the key stat here. He still ranks fifth all-time in strikeouts, finishing his career with 3,701 punch outs.

This card in solo form isn’t the easiest to find, but there are a handful on Ebay right now and you can usually get an ungraded copy in the $5 range delivered. Someone got a steal on a PSA 8 not long ago, which ended for just under $10. Another PSA 8 sold for $25, which is a better price range for expected cost. There is actually an active auction for $25 in PSA 8 as well. Just be careful about the cuts on the cards if you’re looking for a nice example. A card where they cut into the border like the one above shouldn’t cost you more than $5 delivered.