Today’s Card of the Day celebrated one of the best hitting performances in a game during Pittsburgh Pirates history. On September 16, 1975, Rennie Stennett went 7-for-7 in a 22-0 win over the Chicago Cubs at Wrigley Field. The only other time that has happened in a nine-inning game was back in 1892 when Hall of Famer Wilbert Robinson accomplished it with the Baltimore Orioles. Rennie Stennett has a regular 1976 Topps cards, but they also included a ’75 Record Breaker card in the set featuring Stennett, which we feature here on his 70th birthday. 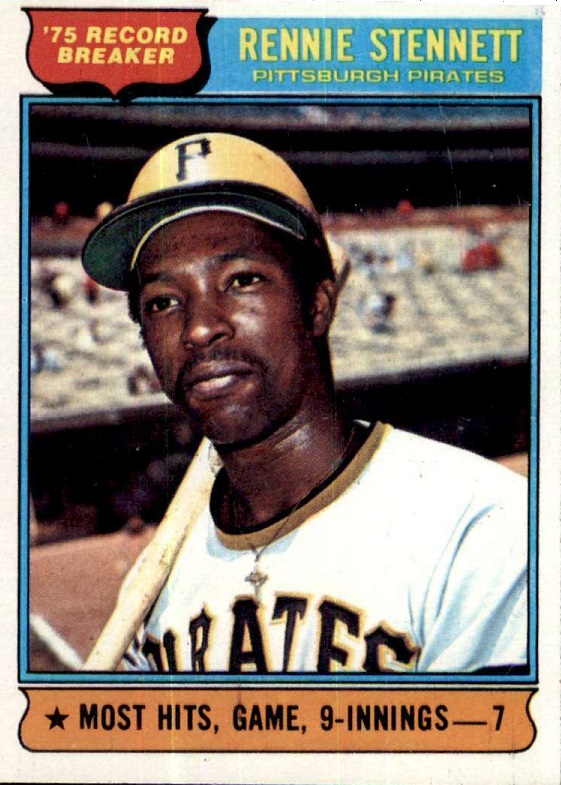 The front of this card almost looks like Topps told Stennett that they were taking this photo to honor his 7-for-7 game. He accomplished his feat so late in the season that it’s unlikely they would even have time to play out that scenario if they wanted to, so maybe he just has the look of someone thinking they could one day have seven hits in a nine-inning game. I’ll note the obvious here and say that Stennett didn’t break any record. The Baltimore Orioles were a National League team in 1892, so he actually tied a record with the seven hits in nine innings. On the back of the card, they add their asterisks to make it “true”… 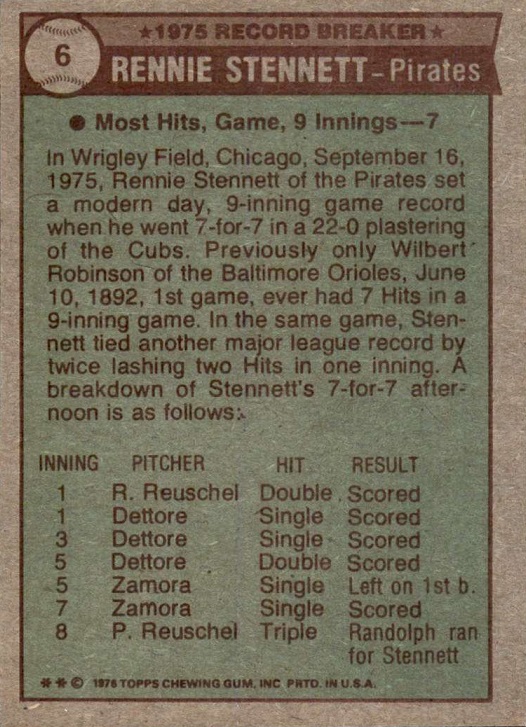 According to Topps, the record he broke was the modern day record, which apparently makes it fine to call it a record breaker card. I’ll let you in on a secret, a hit in 1892 is the same as a hit today, they didn’t change the definition in 1900, so there’s no reason to use a random date to separate hit records. Anyway, let’s get on to the good stuff.

The back of this card gives the breakdown for each hit, listing the inning, pitcher, type of hit and the result. You see some interesting things thanks to the breakdown. The first hit was off Rick Reuschel and the last one was off of his brother Paul. Future Pirate Rick Reuschel got knocked out in the first inning. Hits #2, #3 and #4 were off of Stennett’s old teammate from the 1973 Pirates, Tom Dettore. Stennett scored five runs in the game, and as most of you know already, he left for a pinch-runner (rookie Willie Randolph) in the eighth inning, taking away the possibility of getting an eighth hit. His spot didn’t come back up, so no harm, no foul. The little recap notes that he tied a record by collecting two hits in an inning twice in the same game.

If you’re interested in this card, it’s a relatively easy common to find. You’ll probably pay about $3 for a decent one, which includes shipping. His regular 1976 Topps card goes for about the same price. A nicer one (ungraded) will go for a little more. Two closed auctions have interesting results. A PSA 7 recently ended for $16, including shipping. A PSA 9 also recently ended and that one ran the buyer $129.56. If you’ve ever seen a PSA 7 up close, you know it’s a very nice looking card. When you get into the higher grades, the differences are much smaller. Grading is also subjective and done by humans, who aren’t always consistent. I’ve seen cards graded an 8 that looked nicer than a 9 before, so that’s quite a difference in price for two cards that don’t really look that much different. Once it’s graded though, that grade carries weight in the industry, so it’s going to retain value.