Today’s Card of the Day in another first in this series. This is the first time that I’m featuring a Topps team card for the Pittsburgh Pirates. I choose this particular card for two reasons. The main reason has to do with today’s This Date in Pittsburgh Pirates History article. The Pirates traded for Mike Easler on this date in 1977. They also reacquired Manny Sanguillen on this date in 1978. I have featured both of those great gentlemen here already, twice for both of them in fact. However, this particular card has both of them pictured on the same card, along with some other great names in team history, including Hall of Famers Willie Stargell and Bert Blyleven. The second reason I picked this particular card is that it pictures the 1979 World Series champs, and there’s never a bad time to feature that team on a Pirates history site. 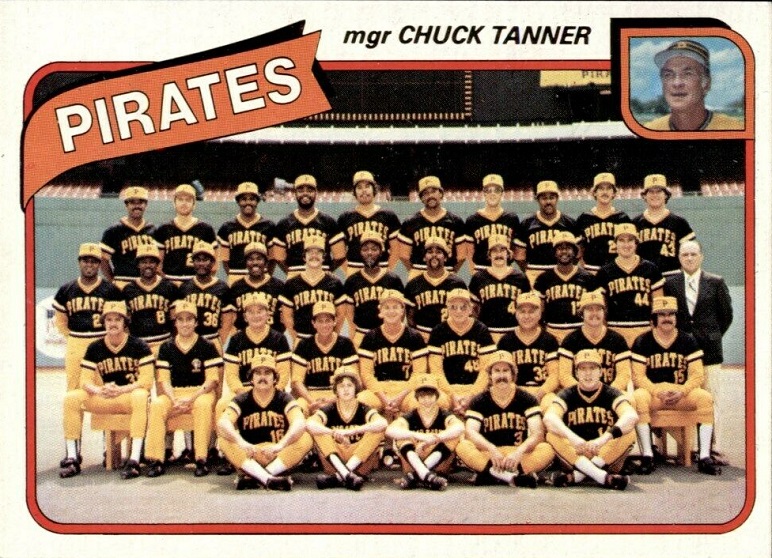 A fun exercise here might be to see how many players you can name here before looking at the back of the card. It’s not just players, which is obviously without even looking closely. The man in the suit to the right gives that away, plus the two mini Pirates in the front row. Then the second row really lets you know that this photo isn’t all players. I don’t know why Topps did it this way, but Chuck Tanner is not only in the team photo, he also has an extra photo in the top right. He’s the only person mentioned by name on front. That happened with all of the managers/team cards.

Done trying to figure out names? Okay, here’s the back, which doesn’t tell you every single name (sorry), just the ones who made it into the 1980 Topps set: 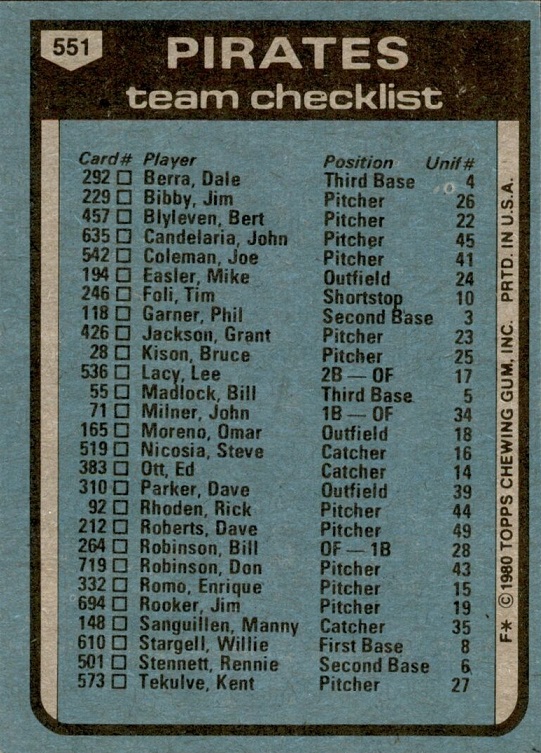 The checklist cards are tougher to find in top condition compared to every other card in the set because of those little squares between the card number and the name. Many people actually used the checklist like Topps intended it to be used. That kills the condition now, basically making those cards worthless. It does help the prices for the remaining cards, though not a significant amount. It just makes it a little harder to find higher grade examples.

I like that they included the uniform numbers for each player on the back. It sort of helps with the player identification on the front, but only with the handful of numbers that you can see. As you can see by the checklist, a Pirates team set consisted of 28 cards, including this team photo…but it’s actually 29 cards, which is unnecessarily confusing. For some reason, Topps didn’t include the Pirates Future Stars card on the checklist. It’s card #683 and it features Doe Boyland, Harry Saferight and Alberto Lois. Oh look, here’s a link to an article about that particular card!

This card can be found on a website called Ebay for $2 delivered. There are numerous auctions in that price range. There’s a very interesting recent auction that ended. It had a PSA 10 example of this card. If you’re new to grading, that 10 grade means that it was deemed to be perfect. That auction ended for $122.50 delivered. I was going to recommend that you look into buying the entire team set of 29 cards, but there wasn’t a single one for sale on Ebay at the time of this writing.