Today’s Card of the Day features a player who the Pittsburgh Pirates traded on this date 35 years ago today. However, for his first Card of the Day article, we go back to his rookie season for a card that was released about six months after he was traded to the Pirates from the New York Mets. The Pirates acquired outfielder Marvell Wynne in a four-player deal, with catcher Junior Ortiz going to the Mets on June 14, 1983. Wynne had no big league experience at the time, but the Pirates put him right into center field and played him every day. This 1984 Donruss card is one of three cards considered to be his rookie card. Topps and Fleer also released cards of Wynne in 1984, but I decided to go with the Donruss set because of the photo and the fact that the Donruss set was more popular at the time. 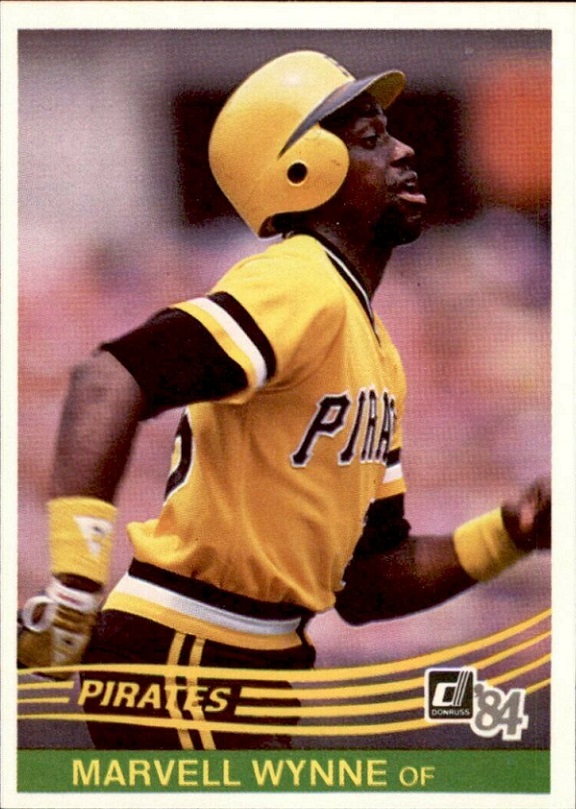 The 1984 Donruss set was very popular due to limited print numbers compared to Topps and Fleer, as well as the fact that Don Mattingly’s rookie card was in the set. At one time he was one of the best players in baseball, possibly the best for a short time, so a rookie card with a limited print run (relatively speaking) made the entire Donruss set popular. Mattingly cards regularly sold for $100 back then, while his Topps and Fleer were more in the $30 range. Wynne never enjoyed that type of popularity, but if there was a card of his that was collectible, it was this one. He did a solid job as a rookie and he was just 23 years old, so there were likely people who went after his cards for a possible future investment.

I have never been a big fan of this set other than the rarity for the era. The photo quality from the set isn’t the best and the front design isn’t that great. The front has a small white border around the photo and four wavy lines with the team name in the bottom. The wavy lines and writing (including name and position) were all done in yellow for every card in the set, but the green box you see here for the name wasn’t green for every team. All of the Pirates had green, as did the Boston Red Sox and California Angels, but a team like the New York Yankees had navy blue, while the New York Mets and San Diego Padres had brown for the box color. 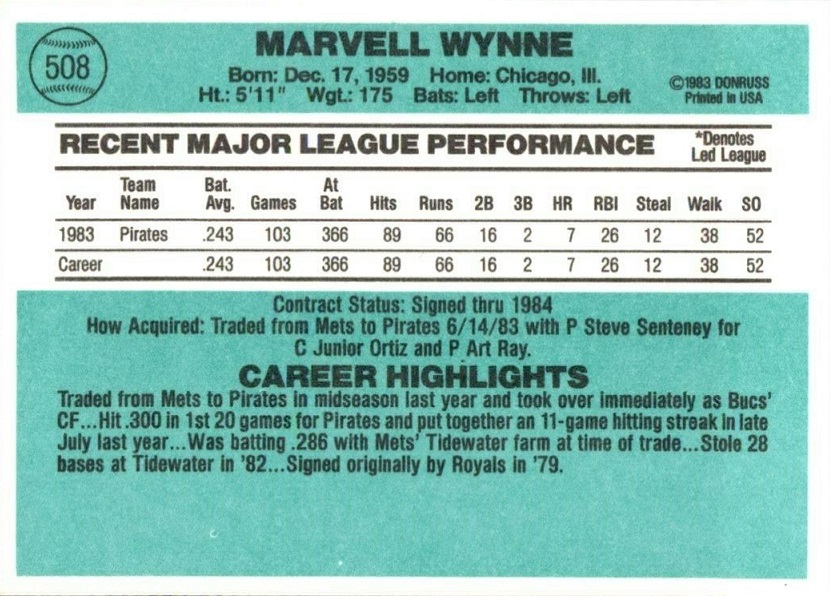 The back of 1984 Donruss cards only had big league stats, so there’s not much to look at here in that regard. Having a player with only one year of stats left a lot of room in the career highlights section at the bottom. Instead of filling that extra room with info, Donruss decided to leave it blank at the bottom. Most players don’t have that big empty spot at the bottom, especially not if they have been in the league for a few years. I mentioned up top that this card came out about six months after the Pirates acquired, which would make it a mid-December release. I don’t know the exact date, but you can tell when these cards were printed by the fact that Donruss used a 1983 date in their copyright line up in the right corner of the card.

This is a common card now and like most common cards from this era of collecting, you can find it on Ebay in the $2 range, which includes the shipping. There aren’t a ton of listings here, but there are enough in the $2 range where you don’t have to rush to buy the first one you see. I like to point out as a helpful hint that applies to a lot of cards from this era that sellers will often list many cards from the same set in one auction and you can still buy them individually through a dropdown screen. So the listing won’t show Wynne as the photo, but he’s available. That helps if you’re on a budget and one of these particular type auctions happen to be the cheapest card.