Today’s Card of the Day features a first-time player and a first-time set in this series. The 1983 Drake’s set consisted of 33 cards, which includes two Pittsburgh Pirates. One is Bill Madlock, which we will probably feature here some time in the future. The other is first baseman Jason Thompson, who the Pirates acquired in a trade on this date in 1981. The Drake’s set was sold in a box and all 33 players in the set were among the top hitters in the game at the time, giving the set the name “Drake’s Big Hitters”. Thompson was coming off of a 1982 season in which he hit .284 with 31 homers, 101 RBIs and 101 walks. He also made his third All-Star appearance, which was his first (and only) one with the Pirates. So on the 40th anniversary of the date he was acquired by the Pirates, here’s a look at a card that celebrated his hitting prowess. This is card #28 in the 1983 Drake’s set, featuring Jason Thompson. 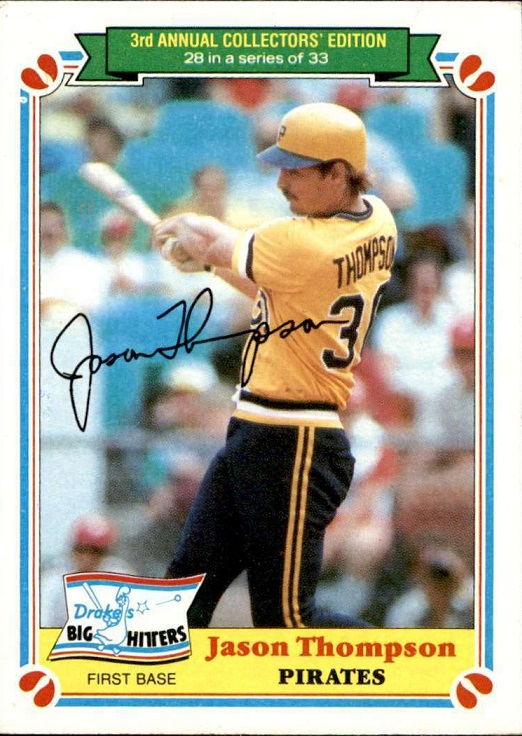 This card is different right from the top in that it has the card number on the front (it’s also printed on the back), which you don’t see often. It does occur in some older sets throughout the years, but those cases were usually on cards that either had blank backs, or ads for companies taking up the entire back. Speaking of the back, I should have started with it here because these cards were printed in a collaboration between Topps and Drake Bakeries. Topps also had similar deals with companies like Burger King and Coke around this time, but those cards would use the same exact front and back as the regular Topps cards from that year, just adding a company logo to the card to make it different. That didn’t happen here.

The 1983 Topps Jason Thompson regular issue card looks like it was taken about a second or two before this photo. The uniform and background match up, but in that card he’s waiting to swing, while clearly he is mid-swing here. Here’s that card: 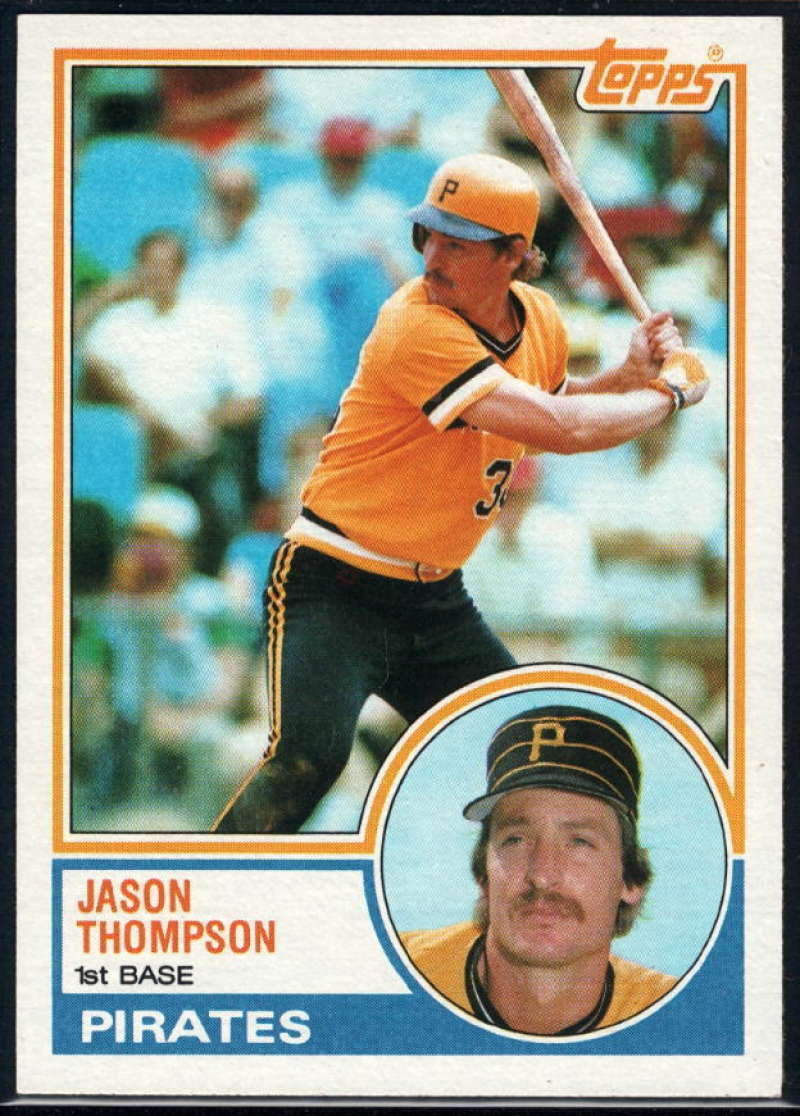 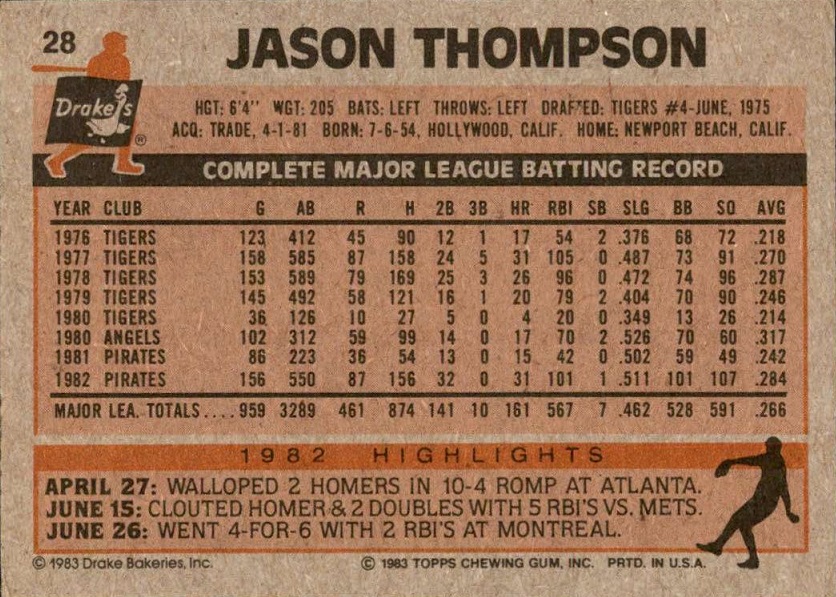 The back of this card looks exactly like a 1983 Topps card except for two small things, which were ads for Drake’s. There’s an ad over the player shadow in the top left corner, and then the little Drake Bakeries Inc. line in the copyright at the bottom left corner. Otherwise you wouldn’t know that this wasn’t a 1983 Topps card back.

You can see the big numbers Thompson put up during his All-Star season in Pittsburgh. The 1981 season was strike-shortened, so it doesn’t look impressive until you realize they cut about 50 games off of the schedule for each team. You can also see the two All-Star seasons he had with the Detroit Tigers back in 1977 and 1978. The bottom of 1983 Topps cards had season highlights and it includes the word walloped, which is an underutilized word for hitting a home run.

These cards aren’t rare, but there aren’t many solo listings for Thompson either. A total of 12 are for sale on Ebay right now and you can get one as cheap as a dollar, as long as you’re the person who buys the one listing for that amount. Most of the others are in the $2-$3 range, which includes shipping.  You might want to consider just grabbing the entire box set, which goes for about $8 delivered and includes Madlock, as well as ten current Hall of Famers and some strong possibilities for future additions from the veteran’s committee. There’s also an Al Oliver card, though he’s on the Montreal Expos.