Today’s Card of the Day features and often overlooked player in Pittsburgh Pirates history. Carson Bigbee was an outfielder for the Pirates from 1916 until 1926, playing his entire 11-year Major League career in Pittsburgh. Bigbee was born on this date in 1895, so he’s getting featured here in this series for the first time on his birthday. Despite the somewhat long career in the majors, he didn’t make it into a lot of baseball card sets, so there weren’t a lot of choices here. Many of those choices were just the same photo on the card pictured below and the only significant difference is the ad on the back of the card. I chose the 1922 Neilson’s Chocolate ad back because we haven’t featured it here yet. The 1922 season was a special one for Bigbee. He batted .350 that season, with 113 runs scored and 99 RBIs. We featured that season here in our Pittsburgh Pirates Seasons series. Between it being his birthday and finding a card from his best season (plus the fact that I love chocolate), this is the perfect card for today’s Card of the Day. 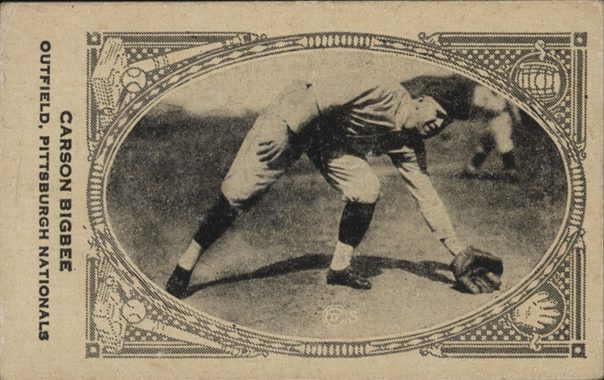 Most of the cards in the 1922 Neilson’s Chocolate set (consisting of 120 cards) feature a vertical photo, meaning it’s taller than it is wider, or better known as the standard card layout. However, the set has a handful of horizontal cards, which stand out from the rest when you’re scrolling through photos of the set. With Bigbee bending down to field a grounder here, it makes a much better horizontal layout. As you can tell by the oval shape on front, there’s not a ton of side-to-side room on these cards with the vertical layout, so a fielding pose like this one wouldn’t look as good.

I am a big fan of the horizontal photos, though you get a better feel of the set with the vertical layout. The border design around the card is obviously not set up for horizontal photos, and without seeing another example from this set, it has to look quite odd to see his name/position/team on the left side of the card written out that way. Teams back then were often referred to only by the city and league. That made sense when you had just 16 teams and there were two clubs in Chicago, Philadelphia, St Louis, Boston and New York. That’s right, the majors back in 1922 only played in 11 cities, and it’s generous saying that Brooklyn was a different city than the two New York clubs.

This set has a V61 card designation, with the V telling you that it was a candy issue made in Canada. Non-candy issues from Canada have a C designation before their random catalog number. In this particular case, “61” was just made up by a guy named Jefferson Burdick, who did an amazing job of cataloging cards back before the internet. 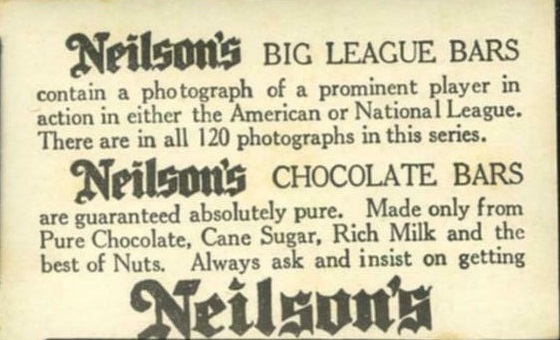 I won’t go into a lot of detail here. All of the backs in the set were the same, though this back is from a Bigbee card. It’s just an ad for Neilson’s chocolate bars, telling you how many cards are in the set and then describing in delicious details how they make their candy. Ads on the back of the cards were quite popular back in the early years of card collecting.

As mentioned at the top, there are other options for this particular pose. If you’re interested in picking up this card, then don’t limit yourself to the Neilson’s set. Unless your last name is Neilson, then there’s no reason to settle on this specific card as your only choice. You can also find this photo in the W573 strip card set and the E120 Caramel set, which is actually two different sets and the borders of the cards look different. In fact, you can also find this pose in that E120 set on a card meant to be his older brother Lyle, who was his teammate on the 1921 Pirates. The caption on the card reads “L. Bigbee – Pitcher”, but it’s the same photo used above, pictured twice in the same set.

Anyway, a Neilson’s card of Carson Bigbee graded 3.5 by SGC (another big grader, not quite at the PSA level) recently sold for $48. Another one in poor condition (ungraded) didn’t sell for $30, so for some reason it got relisted for $40 (true story). There’s a PSA 4 Neilson’s listed for $200, which is well above the price for the card just a 1/2 grade lower. There’s also an L. Bigbee version for $55 in low grade. Surprisingly, no other examples of the W573 or either E120 are currently available, but they’re not impossible to find, so you can just bookmark a Bigbee search and one should eventually come up for a reasonable price.