Today’s Card of the Day features a man who was signed by the Pittsburgh Pirates on this date in 1969 out of Panama. Ten years later, he was out in center field for the Pirates, catching the final out of the 1979 World Series. During that 1979 season, Hostess continued putting cards of baseball players on the bottom of their boxes. They came in a three-card panel and there were 150 cards in the set. Today’s Card of the Day is #12 in that set, featuring Omar Moreno. 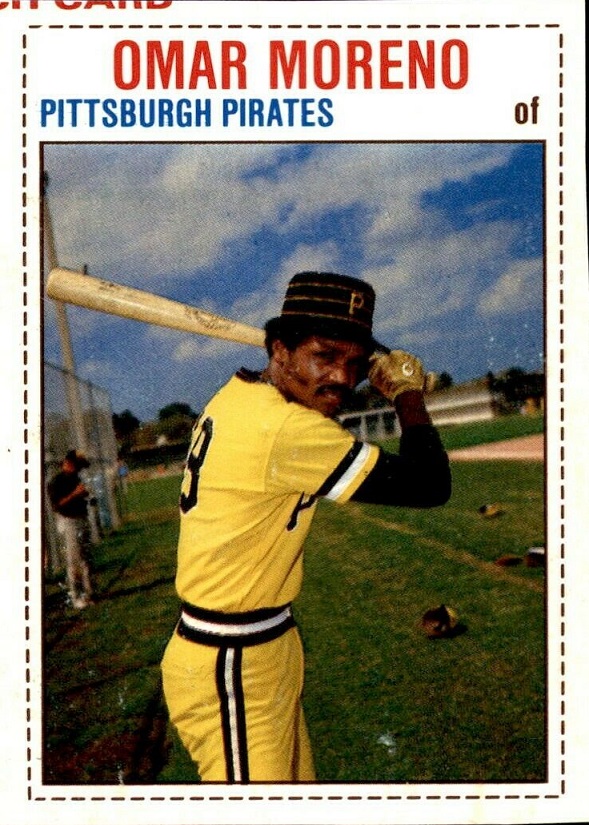 You can probably tell by the background that this was a Spring Training photo. Moreno is decked out in the all-gold version of the mix-and-match jersey era for the Pirates. This was not a high quality photo of Moreno and it was taken at an odd angle, but you would at least hope that this is the best picture that they had available and they didn’t choose this over something better.

As mentioned, these came in three-card panels on the bottom of a box from Hostess, so there are multiple ways to find this card. The most typical way is how you see above, where someone took the time to cut and separate the cards from the box. Obviously some cuts are much better than others. You want to see that dotted line border around the card, but it’s not bad when the person did the cut much bigger and left borders. That actually protects the card itself and it’s possible to do a better cut before submitting the card to be graded.

The second way to find this card is in the three-card panel cut from the box. That’s the second most typical way and probably makes up about 15-20% of the card’s current population. Moreno was card #12, putting him to the far right on a card featuring #10 Terry Whitfield and #11 Jim Palmer. Whitfield was an outfielder who spent ten seasons in the majors. He is pictured with the San Francisco Giants. Jim Palmer is the Hall of Fame pitcher from the Baltimore Orioles, who would be facing the Pirates and Moreno in the World Series later that 1979 season.

The third way to find this card is someone just cutting off the entire bottom of the box, leaving plenty of room around the cards, keeping those dirty scissors away from the collectibles. That’s pretty rare, but I’ve seen them. The trouble is finding that full bottom panel for a specific group of cards. The final way is the box remained complete. You don’t see many of those as they were/are tougher to store/display as one piece, taking up a lot of room. This way would also be the mostly costly one, assuming the same grade across the board for the four possibilities. 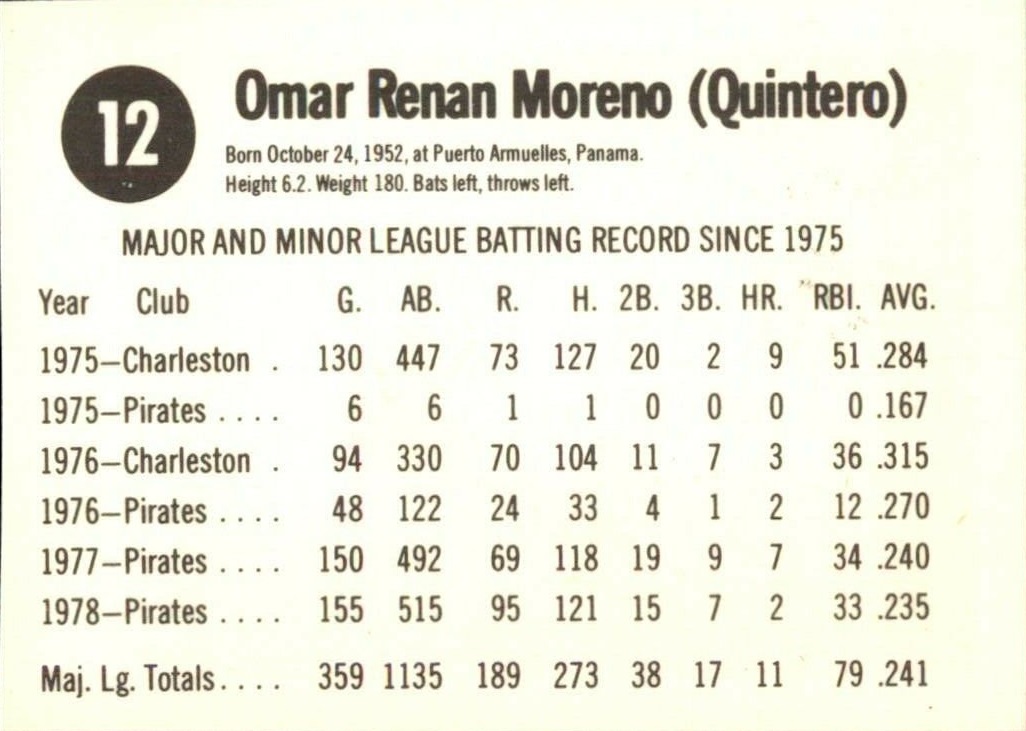 The back of these cards were very simple, black writing on a plain white back. They all included 5-6 lines of stats. Jim Palmer went back to 1973 on his because he was only playing for one team during that time. Terry Whitfield went back to 1974 and didn’t include any minor league stats, even though he played in the minors during the 1974-76 seasons. Moreno here goes back to 1975 and includes two years of Triple-A action. He only had four years of big league stats at that point, so they’re all represented here, as well as the MLB totals at the bottom.

If you’re interested in this card, you have multiple options for both the solo card and the three-card panel. The solo card will run you about $4-$5 delivered, but be sure to look at the cut of the card. You don’t want any where they cut into the border. There is also a PSA 9 available for $70. That’s about as nice as you will find for this card.  There’s also a solo card autographed by Moreno available that might pique your interest. For the three-card panel, you’ll pay about $8-$10. There is one of those graded, though the price seems a bit high, going for $93 in a PSA 3.