Today’s Card of the Day features a player who finished his career with the 1996 Pittsburgh Pirates, though he was still getting paid by them during the 1997 season. Mike Kingery was signed to a two-year contract in December of 1995, and he hit .246/.304/.336 in 117 games for the Pirates during the 1996 season. He was released in January of 1997 and waited until the end of the season to retire from baseball. It obviously wasn’t a memorable stay, especially while playing for a team that went 73-89 and finished in fifth place in the division. The main reason I decided to feature Kingery here today wasn’t his performance with the Pirates. I picked him for two reasons. The first being that it’s his 60th birthday, but more importantly, I haven’t featured a card from 1996 here yet. So we make amends to all of the baseball sets from 1996 by highlighting the Upper Deck Collector’s Choice set, featuring the aforementioned Mike Kingery. 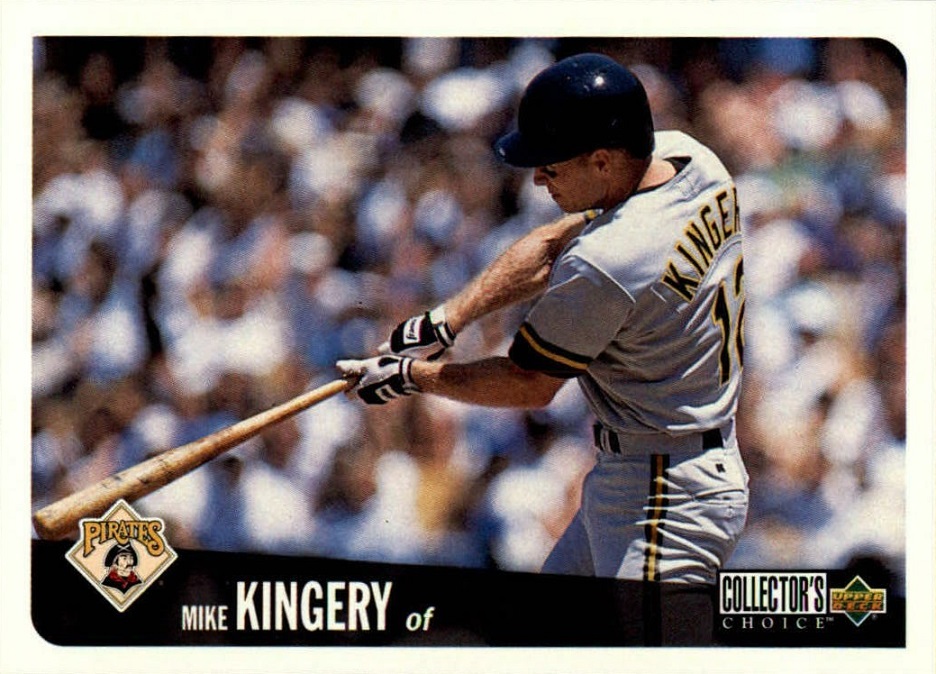 I had multiple options to choose from here. I hope to be doing this long enough that I circle back to another Mike Kingery card in the future, but there are thousands and thousands of card options for Pirates players and more being produced each year. That’s going to make it tough for a one-year player with a nondescript season to get another feature here (although I pick all of them so technically I could use him tomorrow if I wanted). So anyway, I had to go with the best available option for this card, just in case we don’t get to another Kingery card. This card has a great action pose, mid-swing, you get a glimpse of him, while also seeing almost his entire name on the back. They also used a horizontal layout here, while most cards in the set are vertical by baseball card standards, meaning the photos are taller than they are wider. There’s something else that sold me on this particular card…hmm. Yup, the Pirates logo in the bottom left. That’s a great logo. 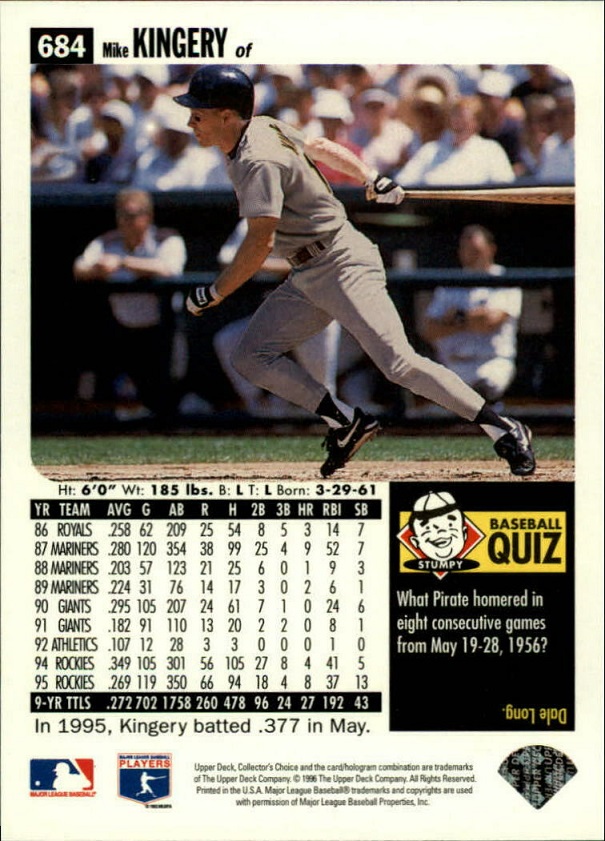 This back photo almost looks like it could be the follow through from the first photo, but they you see that the uniform is actually different. No stripes down the side of the pants or at the bottom of the sleeve. The back has a trivia question that I expect all fans of this history site to answer correctly. If not, I’m not doing a good job here. You can see by Kingery’s stats that he had some strong years and down years, and he even spent a full year in the minors in 1993 before reemerging with a .349 average  with the 1994 Colorado Rockies. He also had a pretty good May of 1995 according to the note at the bottom.

Maybe someone out there not related to Mike Kingery wants this card. Maybe a big fan of the 1994 Colorado Rockies. It’s obviously a common card and you’re basically paying for the shipping when you buy the card in the $2 range. One seller in particular has the card for sale for 99 cents, with $3.50 shipping. I wouldn’t recommend paying that much for one BUT that shipping is a flat rate. So if you want all 104 Mike Kingery 1996 Upper Deck Collector’s Choice cards they have, then that seller might be for you. It works out to three cents shipping per card!