Today’s Card of the Day features Pittsburgh Pirates pitcher Moses “Chief” Yellow Horse, who played for the team during the 1921-22 seasons. His cards are extremely popular in the collecting community because they are very rare and because he is considered to be the first full-blooded American Indian to play Major League baseball. He was a member of the Pawnee tribe, born on March 28, 1898 in Pawnee, Oklahoma. If you want a card of Yellow Horse, you only have four options, and only his 1922 Exhibit card actually pictures him with the Pirates. The other three cards were minor league cards produced by

Zeenut. He appears in the 1922, 1923 and 1924 sets from that company. So today we feature his Exhibit card, though in the future I might stretch the qualifications a bit and cover one of his Zeenut cards. 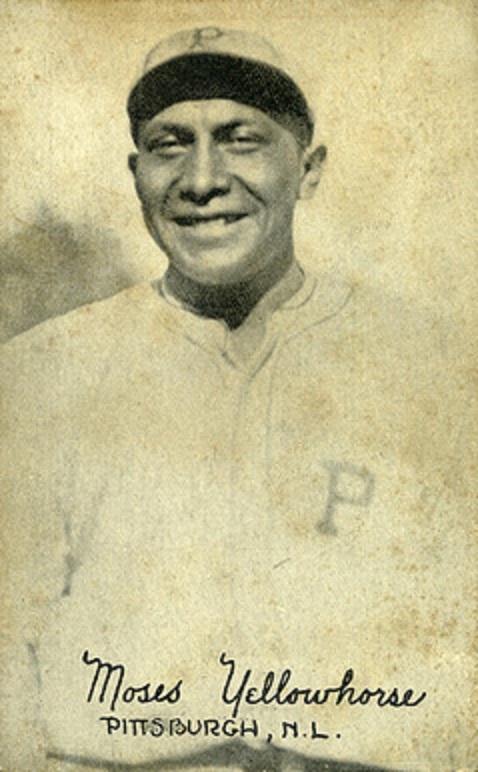 It would have been great to get a full uniform shot of Yellow Horse, but this will definitely do, since there are no other baseball card options. There’s actually a great looking 8×10 available cheap on Ebay in quantity featuring a full shot of Yellow Horse warming up on the sidelines. This photo captured him in a one-year uniform, though not taken during the year the Pirates wore that uniform. I’ll explain the reasoning behind that.

The 1920 Pirates had a jersey with a pocket on the front, and the “P” insignia on the pocket in blue writing (it was red before). The 1922 jerseys used an old English type of writing for the “P” insignia, similar to the “D” you see on Detroit Tigers hats, so you can eliminate that jersey here. In between they had a rather plain all white jersey with a medium size “P” on the front left chest. The hat he is wearing appears to be a 1920 cap, which were white with red lettering. The 1921 uniform came with a navy blue cap and red lettering. I’m thinking that this is a Spring Training photo from 1921, but taken before the new uniforms arrived, so he’s wearing a 1920 jersey/hat. I can’t see the pocket in the photo (could just be a photo quality issue), but the size of the “P” insignia looks much smaller than the 1921 version I’ve found elsewhere in dated photos. Yellow Horse didn’t join the Pirates until spring of 1921, so that’s the only time that the 1920 uniform would be an option.

Exhibit cards are bigger than most cards produced back then. They measure 3-3/8” x 5-3/8”, compared to the normal card size you’ve seen for the last 60+ years of 2 1⁄2″ by 3 1⁄2 “.  Many of the older cards of that era were actually smaller than today’s standard card size. There are 74 cards in the 1922 Exhibit set  and Yellow Horse is #73, though the cards weren’t actually numbered. The checklist now lists them alphabetically.

There is only one recent public sale of this card that I could find and it sold for $1,320 in a PSA 6. You might think that the higher grade pushed that price, but it’s due more to the rarity. Only three of these cards have been graded by PSA. I don’t have a good estimate of how many ungraded examples exist, but I feel confident in saying that it’s not a lot. An example of it is probably not going to just pop up on Ebay once every three months. Maybe more like once a year, and it could be the same one with a high price. So even though this was a PSA 6, Yellow Horse being a historic figure in baseball drives the price, maybe any card of him more valuable. Basically, if a PSA 4 comes up for sale, don’t expect it to go for less than this card just because it’s a lower grade. It might, but it could also go higher if the right bidders get involved.