Today’s Card of the Day features a former Pittsburgh Pirates player born on this date, showing him in one of his many roles with the organization over the years. It also features three other coaches for the Pirates, on a card aptly named Pittsburgh Pirates Coaches. 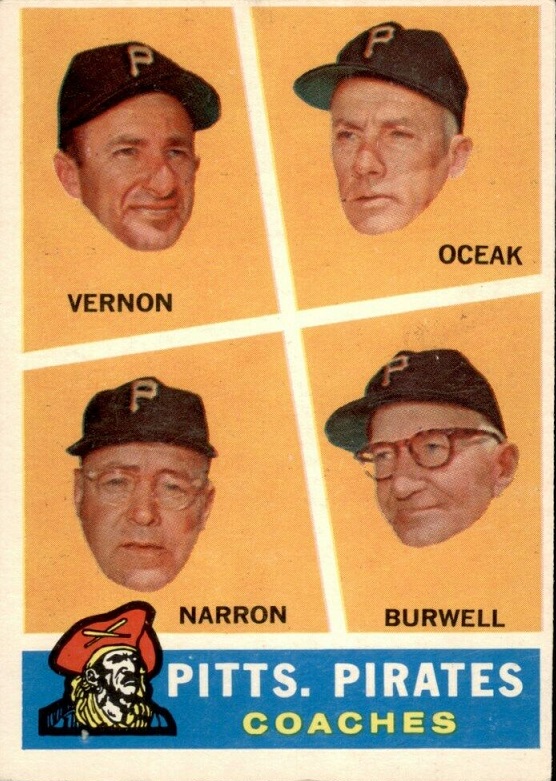 This card uses the floating heads style of portraits to display the four coaches. Last time I featured a card that had a floating head, I believe the main word used in the comments for the look of the card was “creepy”. That was for a card with just one player (Manny Mota), so how does it feel looking at four players? Now realize that the set had a coaches card for each team at the time, 16 teams total. I’m willing to bet that there are some people who don’t like that Pittsburgh is abbreviated as “Pitts” on the front, because last time I posted something on Twitter where Pittsburgh was abbreviated the same way, multiple people mentioned that they didn’t like it. There is one thing that I like about the front of this card. If you’ve read these Card of the Day articles often, I’m sure you can figure it out. If you’re new here and you’re drawing a blank, possibly mesmerized by floating heads, well it’s the Pirates logo that does it for me. I always give extra points for the logo on front and that’s a great one from the past. 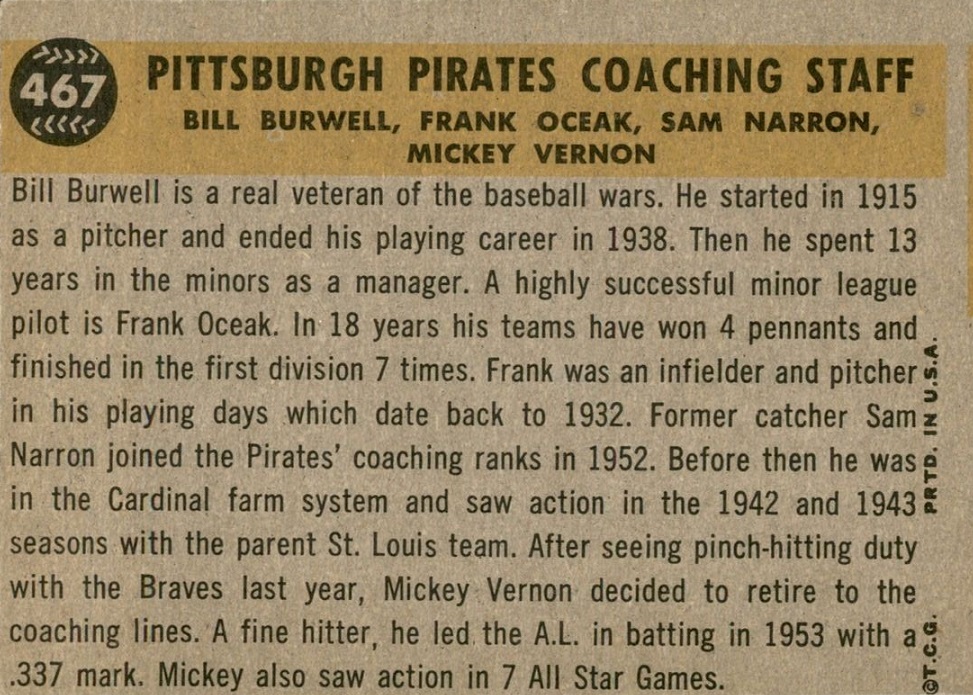 The back has quick bio notes on all of the coaches, with just enough room to tell you some important facts on each gentleman. It starts off with the man born on this date in 1895, a Mr Bill Burwell. He pitched for the Pirates in 1928, as part of his long pitching career in pro ball. He also got to manage the Pirates on the final day of the 1947 season and picked up a win, leaving him with a perfect winning percentage as a big league manager. Frank Oceak played 14 seasons in the majors without seeing a single big league game, but he made it as a big league coach, and he can be seen congratulating, then running up the third base line behind Bill Mazeroski, as Maz rounds the bases after ending the 1960 World Series. Oceak was also a coach for the 1971 World Series champs.

Coach Sam Narron is part of a three-generation baseball family that doesn’t get recognized because they weren’t a “grandfather-father-son” grouping, which doesn’t really make sense because that’s not what three generations mean for a family. Sam Narron played parts of three seasons for the St Louis Cardinals. His nephew Jerry Narron caught for eight years in the majors, mostly during the 1980s. Sam’s grandson Sam Narron pitched one game for the 2004 Texas Rangers.

The final coach is Mickey Vernon, who they noted was retired as a player, but he actually played for the Pirates that September, making him a four-decade player (1939-60). In my estimation, Vernon should be in the Hall of Fame and my reasoning is simple. He went to war for two years early in his career (1944-45) and came back to win the American League batting title, so one could surmise that he would have probably done well during those two missed seasons, especially since the competition level was extremely low due to players like Vernon serving in the military. Without two prime years, he was a .286 hitter with 2,495 hits, 490 doubles, 1,311 RBIs and 1,196 runs scored. Those are great numbers alone, but not Hall of Fame worthy on their own in my opinion. If you give him credit for missing two big seasons for a great cause, then I think he should be in Cooperstown. The closest he got in the voting was 24.9% of the votes.

If you’re interested in this card then head to Ebay and be prepared to search twice for the best deal. That’s because some dealers choose to list it as “Pirates coaches”, while others choose to list the names and leave off the coaches part. Some sellers do both, but if you only search one or the other, you’re only seeing about half of the options. There are about 45 total available as of this writing and they range from about $3 for low grade copies, to $35 for nicer examples. There is one listed for higher and it’s graded a PSA 7.5, but the scan doesn’t match the listing, so I’d avoid that unless you want to write the seller for the scan.