The 1988 Score set was an extremely popular release. It added a fourth major card manufacturer to the trio of Topps, Donruss and Fleer. Topps had a stranglehold on the card game until 1981 when both Fleer and Donruss joined the fray. Score came around seven years later, touting their higher quality photos, with “photo quality” logos stamped on the top and sides of their boxes. Their shine quickly wore off when Upper Deck came around the next year with even better quality cards, but for one year, Score drew the collecting world’s attention away from the big three. As part of that set, they included 25 rookie prospect cards numbers 623-647 in the 660-card set. Among that group was a catcher recently acquired by the Pittsburgh Pirates named Mackey Sasser, today’s featured card. 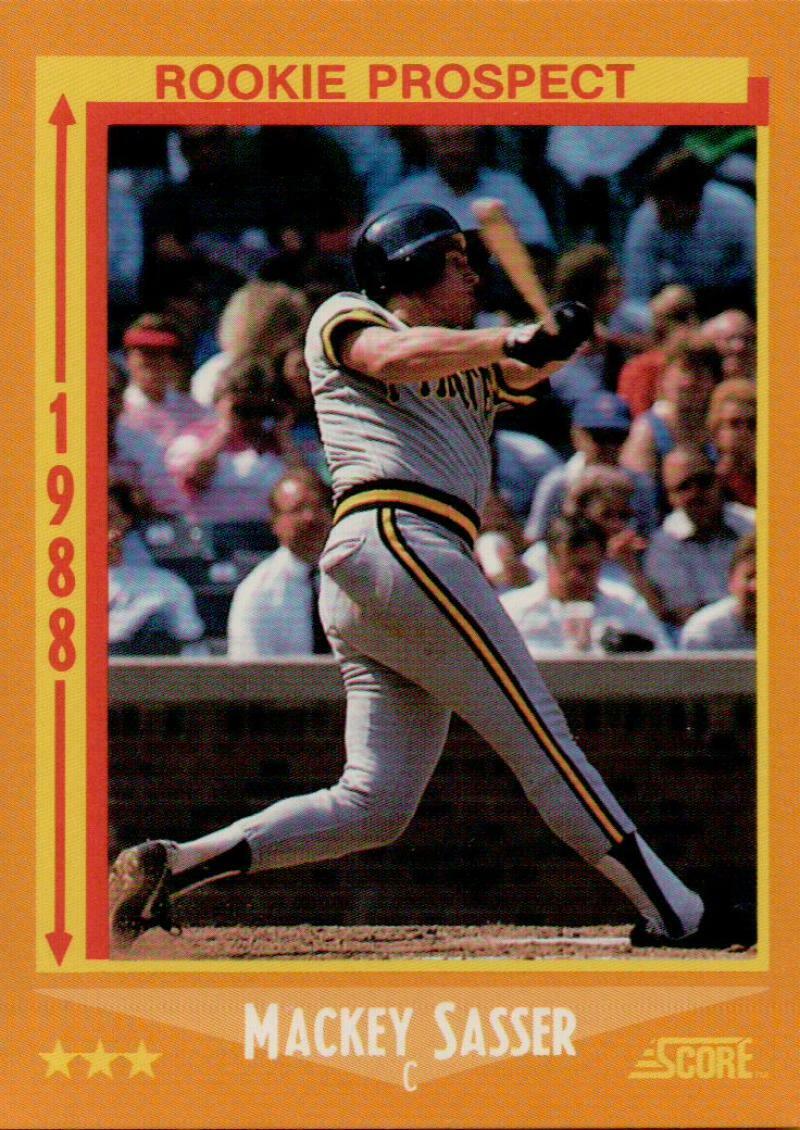 Each of the rookie prospect cards were labeled with the “rookie prospect” title up top and the year on the left side of the card, which isn’t on any of the other cards in the set. The rest of the front is like the other cards in the set. You would probably think those stars in the bottom were special on the rookies, but they’re there on all of the cards in the set. This is a great action photo of Sasser, back when they didn’t have much time to actually get a photo of him. He was acquired mid-season from the San Francisco Giants and only played 12 games for the Pirates that season.

Score did something interesting in their first set. They basically had 110-card subsets sorted by color. The first 110 cards have purple borders, then it followed with blue borders (#111-#220), red, green, yellow and orange for the final subset. The popular card in the set when it first came out was the Gregg Jeffries rookie. The packs sorted the cards by number, so Jeffries was always at the back of the pack if he was in there, maybe not the final card every time, but always one of the final 1-3 cards. Score packs were partially clear though, so you could actually sift through packs looking at the back card to see if it was Jeffries. Sometimes that final card was Sasser though, who was #642, while Jeffries was #645. Since they went in order, you knew that Jeffries couldn’t be in the packs that ended with Sasser as the back card. 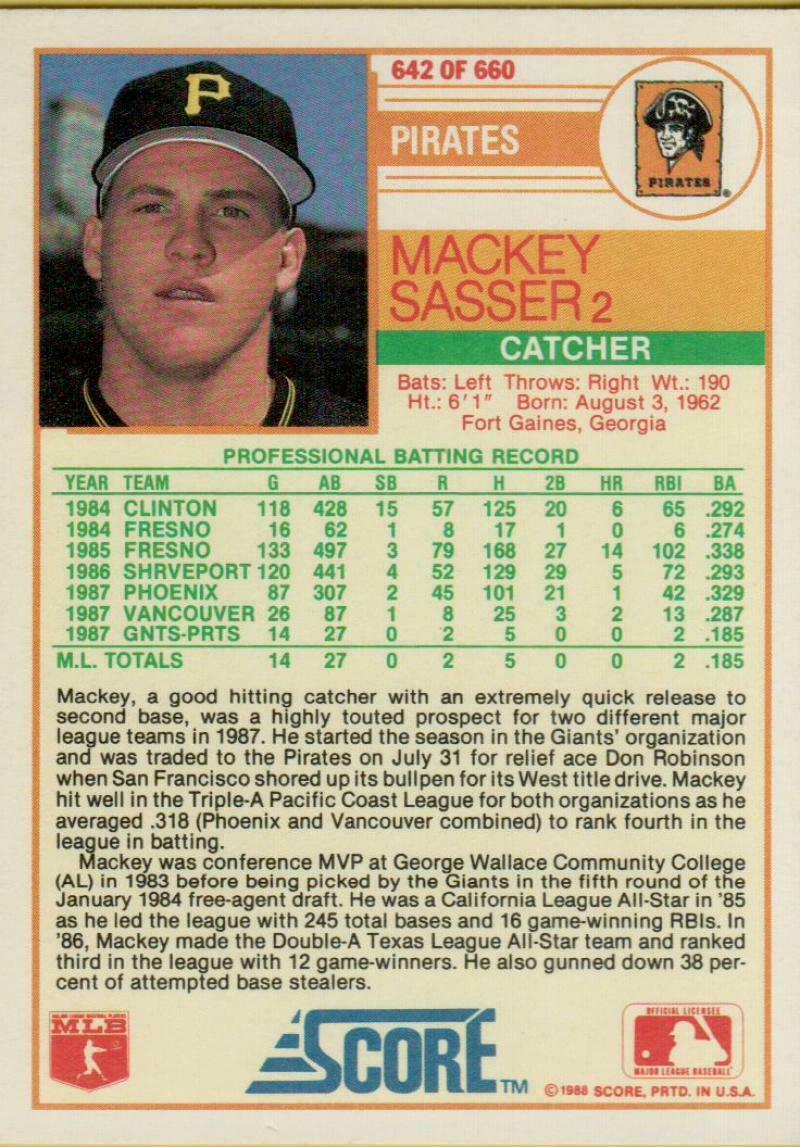 This back was impressive for a card back in 1988. They added a second photo and it was high quality as well. They have all of Sasser’s minor league stats and a nice bio section for him, so you could really do your homework to decide if he was a good prospect to collect. That 1985 season for Fresno was sure impressive, and he hit well in Triple-A in 1987, but didn’t do much in his brief trials with each big league team. You look for younger players when trying to find good rookie cards to collect, but you give some leeway in age for catchers, so 25 years old wasn’t too old.

The unfortunate part about this back is that it starts off by touting his throwing, and that’s what he is most remembered for now, just not in a good way. A few seasons into his career, Sasser got the yips on throws back to the pitcher and runners sometimes took advantage of it. It never went away during his career.

The back here tells you how he joined the Pirates in July of 1987, but by the time most people were opening these packs, Sasser had already been traded to the New York Mets, which happened 33 years ago today (March 26, 1988).

The old Pirates logo in the top right always adds a nice touch to the older cards.

Score ended up printing a ton of cards in 1988 and they were very popular, so the value is low on all of them. You can get this Sasser for about $2 on Ebay and that includes the delivery. You can also find multiple autographed examples.