I’ve mentioned this here a few times, but my favorite set from the 1950’s is the 1955 Bowman set. However, my favorite Topps set from the 1950’s is the 1956 set. I didn’t collect many cards from the 50’s because when I was very young and getting into cards, I went right to the older cards from the deadball era, then back to 19th century cards when I got a job. So the 1950’s cards got ignored for the most part, though I did have a handful of big name players like Mickey Mantle, Satchel Paige, Willie Mays and I even splurged on a near perfect Harmon Killebrew rookie. At one time I started collecting the 1956 Topps set by mistake.

I bought a Jackie Robinson card from the 1956 set, really liked it, then put it in with my collection and didn’t look at it for a while. One day I decided to try to put together a set card-by-card, something to keep me busy. I remembered how much I liked the look of the Robinson card, so I just started perusing Ebay that day and bought a few 1956 Topps cards. I then went to a card show in Fort Washington, PA. and bought about 15 more 1956 cards. I put those cards together and decided to dig out my Jackie Robinson card to add it to the pile. About two minutes later I was staring at a 1955 Topps Jackie Robinson. If you know the sets a little, that’s not a big mistake. Both sets have horizontal looks, with a large portrait photo and a second smaller action photo, both on the front. If you know the sets a lot (like I did), it’s a stupid mistake. Live and learn. Oh yeah, at that card show, I somehow ended up buying two Robin Roberts cards from the same seller. He had about 1,000 cards from the set and I was just going around picking ones I liked and never looked through the pile I set aside before handing it to him to get the price.

Anyway, I quickly got bored with the card-by-card build of the set, and I also couldn’t stop buying older cards, so my 1956 Topps goal switched to  putting together the Pirates team set, which I finished off quickly because I’m impatient and liked being broke. I might go for the full set one day in the future, but for now I just have a good start to it and no Jackie Robinson. The only 1956 Topps card that we have featured here so far is Roberto Clemente, which is a bit surprising, though if we were going to feature just one on purpose, it would be him. Today we add a second card from my favorite 1950’s Topps set. This one features Gene Freese, who was signed as an amateur by the Pittsburgh Pirates 68 years ago today. 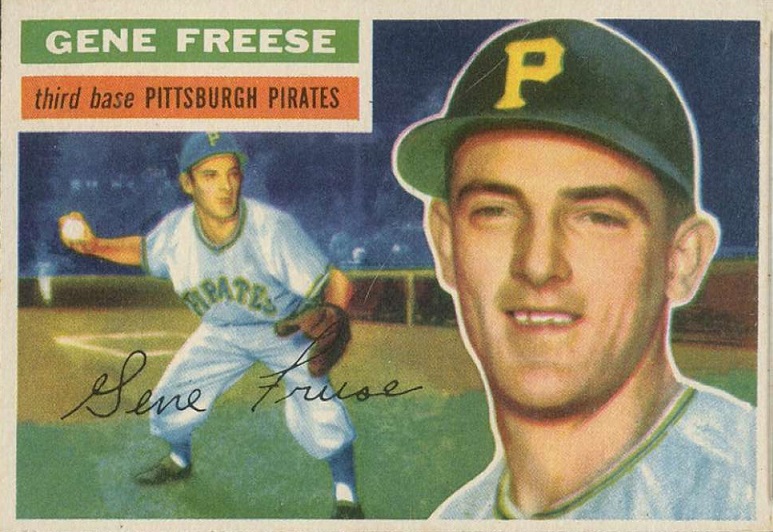 As you read up top, these cards featured a big portrait of the player and an action photo. The difference between this look at the 1955 cards is that the 1955 set had a solid one-color background. The 1956 set had the players on the field in the action shot. There are other differences, such as the name/team being listed in different spots and the 1955 set including team logos on the front, but the background is the major difference. Both sets included facsimile autographs for the players. As I said, this is my favorite Topps set from the 1950’s and the action/field background is what really sells it for me. Some of the action shots are amazing (hint hint: check the Clemente link). 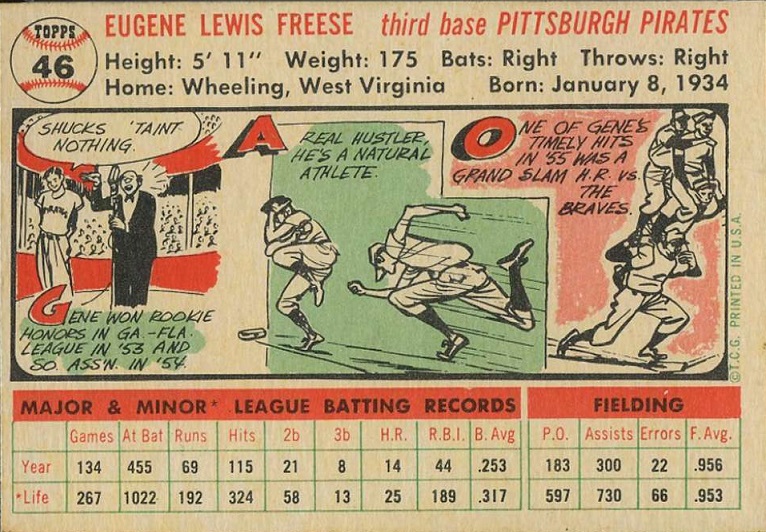 The backgrounds on all 1956 Topps cards included one year of stats and the lifetime totals in the majors UNLESS they only had one year. Notice the asterisk next to the word “life” in the second row of stats. That is there to tell you that it’s the minor league stats for Freese. He was a rookie in 1955, so he only had one year of big league stats and it would have been redundant to repeat it. They also all had the cartoons with the generic players for every player, though some drawings were more human-shaped than others. If you didn’t know it from collecting or prior articles, defensive stats on the back used to be a thing.

This card is plentiful on Ebay for one big reason. They set is very popular right now and there is massive turnover for every card in the set. As of the time of this writing, there were 416 options for you to choose from. Ebay has had 73 sales for this card in their recent history (three months I believe), ranging from $229 for a PSA 9, down to $2.75 for a low grade version. Basically, no matter what condition you want and how much you’re willing to pay, you have a ton of options.