Today’s Card of the Day comes from a set that was printed over a four-year period, with the same photo of Pittsburgh Pirates pitcher Ray Kremer being used over and over again, with subtle changes each year. We look at his 1925 card today, which I picked because the Pirates won the World Series that year. In his second year in the majors, Kremer went 17-8, 3.69 in 27 starts and 13 relief appearances, throwing a total of 214.2 innings. He had a better rookie season in 1924, and then won back-to-back ERA titles in 1926-27, but the 1925 season was a special one, capped off by the World Series win against the Washington Senators. Kremer pitched a complete game victory in game six to keep the hope alive for the Pirates. Two days later, he allowed one run over four innings of relief in a game seven victory, with the Pirates defeated the immortal Walter Johnson to take the title. Kremer was born 126 years ago today in Oakland, California, so we take time to celebrate a World Series hero for Pittsburgh with today’s Card of the Day. 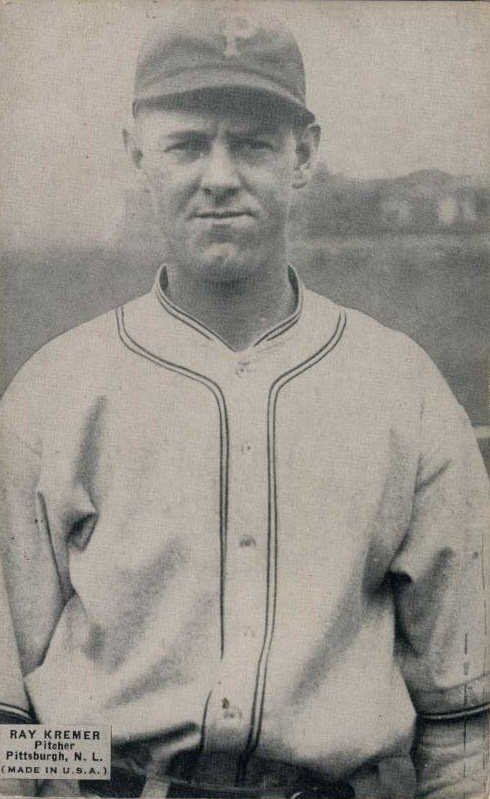 The cards are much bigger than your standard card size now. They are 3-3/8″ by 5-3/8″., compared to the 2-1/2″ by 3-1/2″ size you usually find these days. The card manufacturers here (Exhibit Supply Company) went for no frills with the front design and blank back. There are no borders here or any design at all for that matter, just a full picture of the player taking up the entire front. All that obstructs the view is the small box in the right-hand bottom corner that lists the name, position and team (and league). In parenthesis at the bottom of the white box, you can find the words “MADE IN U.S.A.” These cards were purchased out of penny arcade machines. The picture of Kremer takes up most of the card, but you can still see a fuzzy building in the background, which adds nicely to the look of this 96-year-old card.

I mentioned up top that Kremer was a rookie in 1924, which is when this photo was taken. He was not young at the time despite lacking MLB experience. Kremer played ten years of pro ball before his debut in the majors, spending seven of those seasons with his hometown Oakland Oaks. In that photo, you’re looking at a 29-year-old man with approximately 2,500 innings on his right arm, and he still had over 1,600 more innings left before he retired ten years later.

If you’re interested in this card, then any of the 1925-28 cards should work for you. The real only change with the other years is that you can find the same photo with a green tint or a blue tint, though the name part is a bit different as well, but nothing significant.  If you limit yourself to one year then you limit your options, and individually these cards aren’t easy to find. So the price quotes here are for any of the options, since there’s only six Exhibit Kremer cards on Ebay right now. The highest price one is from 1925 and it’s graded PSA 3, selling for $150. If you had to have a 1925 card, then it’s the only one listed as of the time of this writing. A 1927 example, which has the green tint, is graded SGC 50 (equal to PSA 4) and it’s for sale for $120. If you go ungraded and don’t mind a little wear to the card, then there’s a 1928 version for $38 delivered. There are no completed auctions available to check past sales, so you might not want to wait for an auction-style listing to come up.