Today’s Card of the Day celebrates the great Pittsburgh Pirates catcher Manny Sanguillen, who turns 77 years old today. Kellogg’s put out baseball card sets in the 1970s along with their cereals, with cards inside specially marked boxes. The 1976 set of their 3-D SUPER STARS featured a total of 57 cards, including four members of the Pirates. You could get Willie Stargell, Dave Parker, Jerry Reuss and Manny Sanguillen if you were lucky enough to get a Pirates player in your cereal. We look at card #42 from the set today, Manny Sanguillen. As a side note, Sanguillen was one of our first Card of the Day subjects back when I featured his rookie card, which I bought that same day. 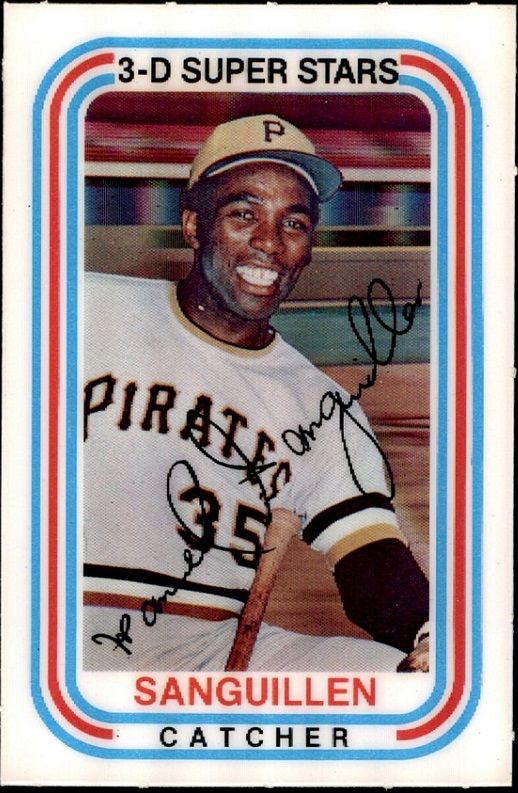 I left a little space around the borders when cropping this scan so you can see the rough edges that are common with this set. As you can imagine by the name, the card had a 3-D effect to it by tilting the photo. All of the cards included the player’s last name only, along with their position and a facsimile autograph over the photo. One of the reasons I chose this specific card to feature today is because Sanguillen has that trademark smile that fans still see to this day around PNC Park. Also, how great are the uniforms from this era? 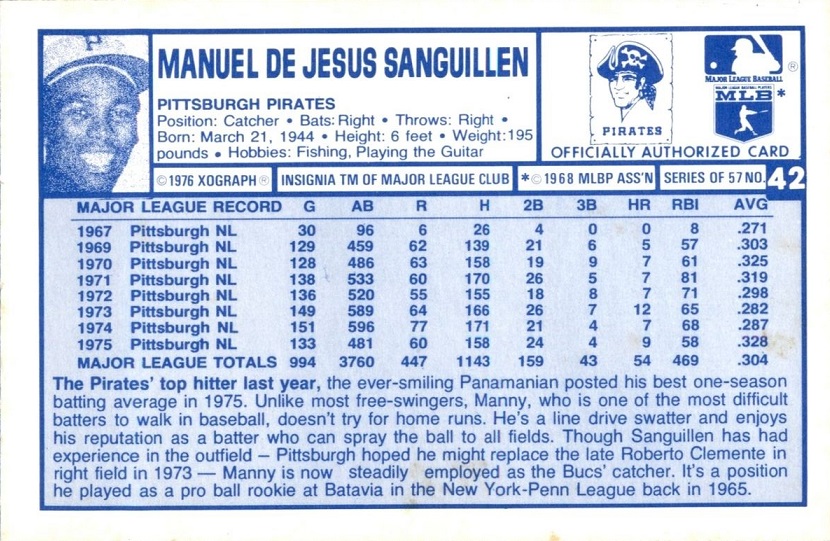 I love the back of this card for so many reasons. The added photo for each player is a nice tough. The Pirates team logo in the upper right always adds points for me (even when it’s not in the upper right). They included the full MLB stats, which is always a plus. Then there’s a nice bio section, which mentions the great Roberto Clemente. You get another photo here on Sanguillen smiling, which was especially easy to get in 1975 when this photo was taken. That year he batted .328, which would end up being his career high average. He finished third in the National League in average that year, two spots behind Bill Madlock, who would eventually become Sanguillen’s teammate with the Pirates.

The back notes that Sanguillen was “steadily employed as the Bucs’ catcher”, but his first stint with the Pirates was nearly up by the time these cards were getting into the hands of collectors. He was traded to the Oakland A’s late in 1976 for manager Chuck Tanner. It was just a one-year absence and Pittsburgh fans welcomed him back in 1978.

I think the one small detail missing here that would have been nice is either his 1968 minor league stats or a reason why his big league stats skip 1968 in the bio section. It looks odd to see him play 30 games in 1967, then get full-time work in 1969, but the Pirates kept him in the minors that full year in between, then gave him the starting job the next year. In fact, I would bet that most people back then didn’t even notice the skipped year for the stats because going from part-time as a rookie to full-time in the second season seems like a natural progression.

The final detail that I like here is the little hobbies note at the top. Who knew that Sanguillen liked to play guitar and go fishing? Not me, at least not until right now.

This card isn’t common, with only nine examples currently on Ebay. There are also nine sold auctions on Ebay over the last three months, so it’s a card that has some interest as well. For reference, there are 74 examples of his 1976 Topps card on Ebay right now. The rarity and desire aren’t reflected in the price though. You can pick one up for about $5, although I’d suggest looking close at the condition. The cards can crack and warp, so a good deal might not actually be that good. You’ll be able to tell by the scan. One interesting recent closed auction was for a PSA 10 example. It sold for just $32, including the shipping.