Today’s Card of the Day is from a set that I really enjoy. The 1993 Fleer Ultra set had a glossy front and back, with a simple front design that included a photo with no borders on three sides. Today’s featured player is pitcher Blas Minor, who turns 55 years old today. He made the Opening Day roster in 1993 as a 27-year-old rookie and he would go on to have his best season in the majors, making 65 appearances out of the Pittsburgh Pirates bullpen. Fleer Ultra gave him the “rookie” tag on his card, which was released in series two of the set. 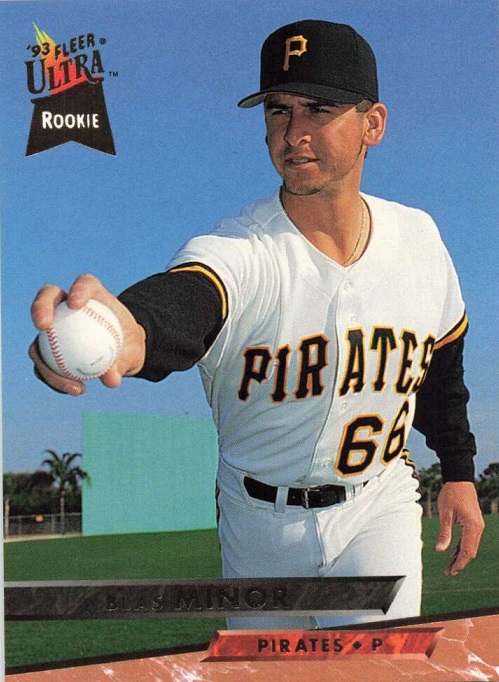 Series one of the 1993 Fleer Ultra set had 300 cards. Series two came out later in the year and added 350 cards to the set, including #452, Blas Minor. Here you see him displaying his pitching grip in a Spring Training photo. Minor has another card from this time (1993 Bowman) with him showing off a split-fingered grip. He’s wearing jersey #66 here, but he switched to #55 during the 1993 season. The “rookie” tag can be seen in the set logo in the top left corner. My one dislike (on the front) for this set is the name plate for the player basically being the same color as the name. Remember that these scans are bigger to show detail, so imagine trying to read “Blas”, which you can barely see on this scan. I like the simple front design and the borderless front has a nice look, especially with the high quality photos and glossy finish they used. 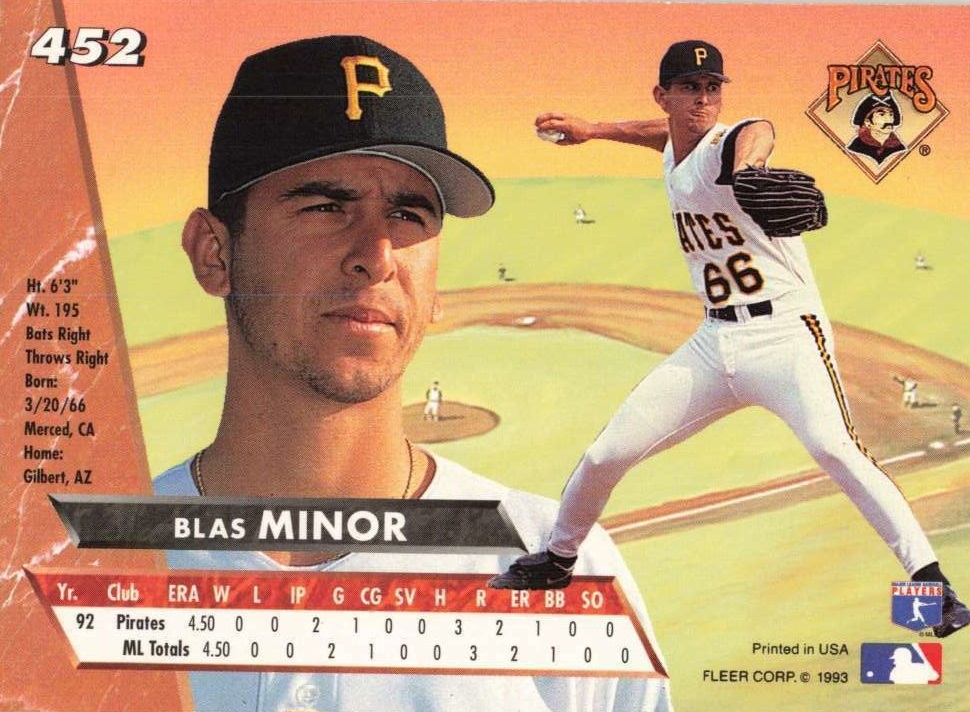 I really like the back of these cards because they add two more photos for each player, plus look at that artistic background of a baseball game in progress. That adds a nice old school touch. I’m not a big fan of card backs going with just one season and career stats only and Minor is a good example of why it can be a really bad option. He pitched one game for the 1992 Pirates, his big league debut. So that’s all we know about him. They didn’t even include the draft/signing year for players so you also get absolutely nothing about his minor league career. Was he drafted at 18 out of high school? Maybe he got hurt in college and went five years, getting drafted at age 23? You already know the answer because you read our This Date in Pittsburgh Pirates History article this morning, but some little kid pulling this card out of a pack in 1993 had no idea and they didn’t have the interwebs to check it out. The back gets all of those lost points back because they included the old school team logo in the top right corner. Bravo.

The card is a common and it’s not rare, but it’s also not easy to find on Ebay. There are just five examples of this card for sale at this time and three of them have shipping rates higher than the card price. You can get it for $2 delivered though from the other two sellers, but if you really want it, then I wouldn’t wait because someone else will snap up those two cheap ones. I have a better suggestion though. Buy the team set for about $5 and get 21 cards, including players like Tim Wakefield, Andy Van Slyke, Jeff King, Al Martin, Kevin Young and Jay Bell. The 1993 set still had a great mix of players, young and old.