Today’s Card of the Day celebrates a man who passed away tragically not long ago while playing winter ball in his home country of Venezuela. Jose Castillo broke in with the 2004 Pittsburgh Pirates and played four seasons for the Bucs, before finishing his big league career with two teams in 2008. His pro career kept going until the day he died on December 6, 2018. He played 13 seasons of winter ball in Venezuela, and he spent the 2009-17 summers playing in China, Japan, Mexico and Italy. This is Castillo’s first appearance in our Card of the Day series, coming on what would have been his 40th birthday. I had plenty of options to choose from here and I went with a throwback design. The 2007 Topps Heritage set borrowed the front and back design from the 1958 Topps set, giving it a great old school look. Perfect for a man who spent more than half of his life playing pro baseball 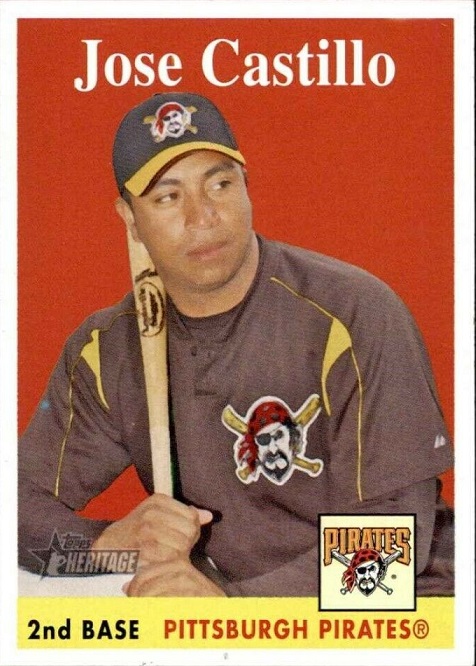 The original 1958 Topps set had all solid one-color backgrounds for the players, name up top, position and team at the bottom, along with the team logo partially in the bottom position/team box. There were different options for background colors so the set didn’t look boring when it was laid out together. You could also get different colors for the writing up top and at the bottom. Perhaps it is fitting that the specific color combo here for Castillo was also used for a young second baseman for the Pirates 49 years earlier. Bill Mazeroski is one five Pirates with the red background, white letting for the name, and the same colors used in the position/team box. Mazeroski was going into his third season in 1958, while Castillo was about to play his fourth year when this Topps Heritage set was put out.

One of the things I like about this set is that the Topps Heritage logo is out of the way. It’s down in that bottom left corner and it’s a very light color (see-through) so it doesn’t obstruct from the player at all. Even though it was using the 1958 design, I always appreciate when cards have the team logo on front, and there’s not one better than the Pirates, though I do like specific Pirates logos better than others. This picture of Castillo also has the logo twice, once of the uniform and also the hat, giving you three looks at the logo. That would be considered overkill for other teams. 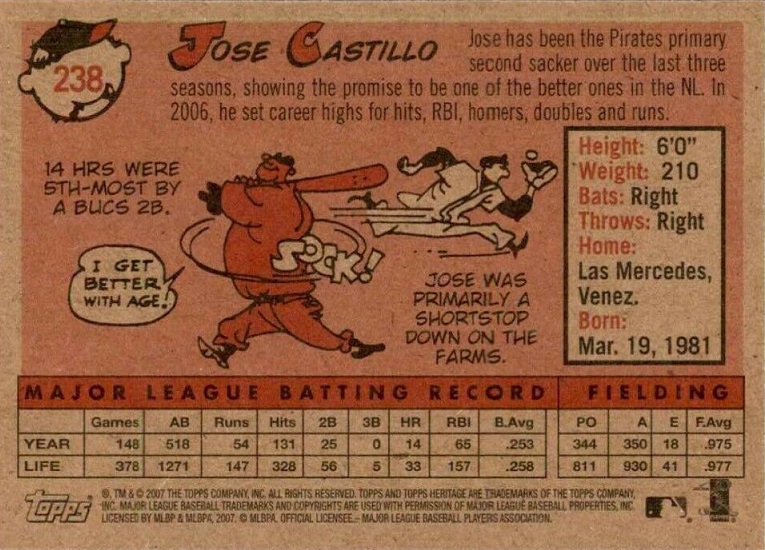 The back of this cards looks exactly like a 1958 Topps set, except for all of that extra legal jargon and trademarks at the bottom of the card in small print. Don’t attempt to read it. I did it for you and it’s not interesting. These cards all had cartoons that never looked like the player on the front of the card, but I guess it would be easier to use generic drawings for everybody, rather than hire someone to do actual drawings for the players on front of the card. At least they could have drawn the batter swinging from the right side though! The cartoon is a bit ironic in that it has generic Castillo saying that he gets better with age, yet the 2006 season was his worst in the majors according to WAR. It notes that he mostly played shortstop in the minors. The emergence of Jack Wilson in Pittsburgh caused Castillo to move to second base full-time during the 2003 season in Altoona, though he had some previous experience at the position.

The stats featured the previous season and career stats only, just like 1958 Topps. That meant that they also include fielding stats, which haven’t been part of baseball card stats for quite some time, with very few examples since the 1958 set was put out. Many of the examples you will see in more recent years only had defensive stats because they were using a throwback design.

If you’re interested in this card, you’ll be overjoyed to find out that it’s a common card, with multiple sellers on Ebay listing it in the $2-$3 range, including the delivery fee. It’s interesting to note that a regular 1958 Topps card will have 5x the amount of selling options, while this particular card had a total of 15 examples for sale on the day I wrote up this article. Two quick notes on that. One seller had an autographed version, which obviously commands a premium and will be tougher than most players from this era who were around for at least a few years. Also, you can find some extra options from people who list many/all of the cards from the set in one auction, with a dropdown screen that allows you to pick specific players. I thought that was important to mention because eight of the 15 auctions I saw for this card had other cards pictured for the auction’s main card, making it look like there aren’t as many options available.