This is just the second time that we have featured the 1951 Bowman set in this series and the first one was very early in the process. Today’s Card of the Day comes from a player who was born on March 17th, but I didn’t want to pass up a good chance to post the first Card of the Day article for John Smiley yesterday. Today’s card is one that I bought minutes after I found out it existed. Pete Reiser was a star player, who had his career derailed by service in the military during WWII (he enlisted) and baseball-related injuries. He was as hard-nosed of a player as there ever was in baseball history. If a ball was hit in his direction, he would do everything in his power to catch it. That all-out style turned him from a perennial All-Star to a serviceable bench player by the time he was 29 years old, as injuries quickly took their toll. He was nearing the end of his career by the time he reached Pittsburgh at 32 years old. It was lucky that Bowman got him into the 1951 set, so there was a card available showing him with the Pirates. Reiser’s lone season with the Pirates was 1951, but he signed there early enough and was still relevant enough that he got a card in the set. That card is today’s featured card. 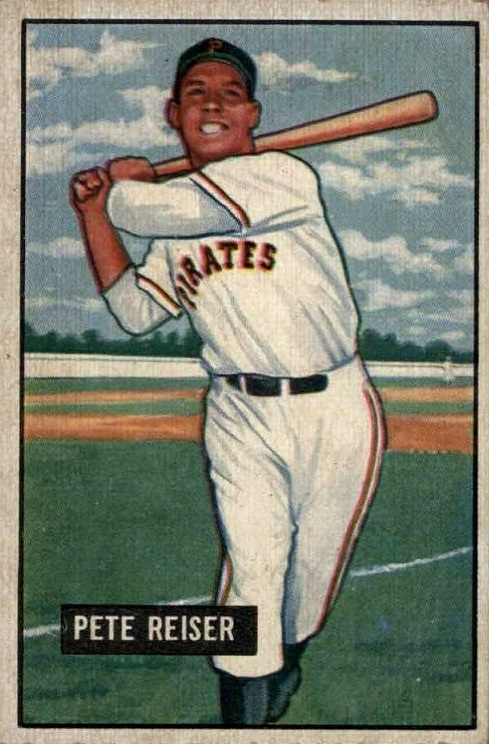 The 1951 Bowman set has an extremely simple design on front. White border, and black box surrounding the photo, which covered most of the card. The player’s name is in a small black box with white lettering. Sometimes the front design draws you to the set and every photo looks good with it. The 1955 Bowman set is like that for me, as well as the 1962 and 1987 Topps and 1987 Donruss. However, the opposite could be said here. The design is so simple that it leaves a lot of room for the picture of the player and often times in this set, the background design in the artwork is what really sells the card here. I am a big fan of the batting pose here, the popular follow-through swing with two hands still on the bat, which was used very often back in the day. The baseball field in the back really sells it too. If you look close to the right of Reiser, you’ll see another player in the photo, who partially blends into the fence. 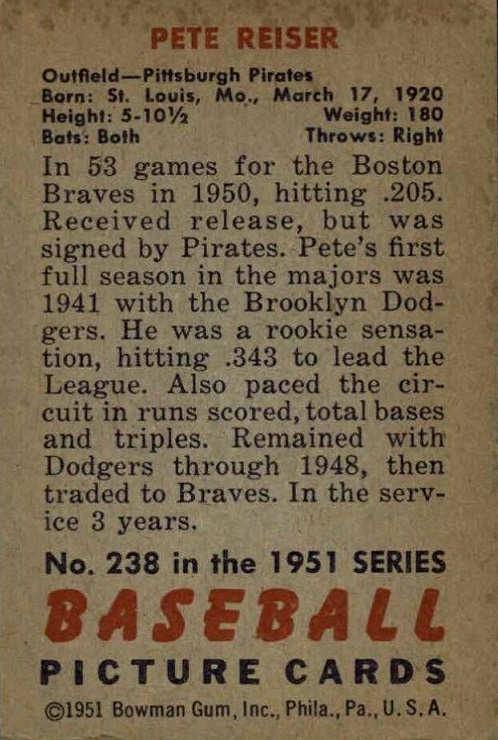 The back of these cards are nice because they used up most of the space for bio information. They didn’t include stats, but you got a nice summary of the important stats for each player. You’ll probably notice that first sentence first and realize that they didn’t do a great job of editing the bio. They did a good job of mentioning his service in the Army though, which should always be recognized for players who gave up prime years of their career, and in some cases, may have cost them a Hall of Fame spot.

The bio here has a statement the is partially true, but it could just be the old way of thinking. Reiser came up during the 1940 season and batted .293 in 58 games. That would be his real rookie season. However, they do also mention that 1941 was his first full season, so that part is true, even if it’s not considered to be his rookie year. You see a nice breakdown of his impressive 1941 season, which they failed to mention that he led the league in doubles, as well as all of the other mentioned categories. They didn’t forget to mention them because the stats didn’t exist at the time, but Reiser led the league with a .558 slugging percentage and a .964 OPS. True to his hard style of play, he also led the league with 11 hit-by-pitches. It was an impressive season, just one year before he joined the Army. Reiser could have stayed in the majors at that time because his previous injuries would have prevented him from being drafted. With him being a star player before and after his service, he likely would have put up an impressive three-year run in 1943-45, as the league became watered down due to so many big league players serving their country.

If you’re interested in this card, you’ll be happy to know that it’s fairly inexpensive. You could go the expensive route if you want a really nice one. Ebay has a PSA 8 listed for $87.49 right now. You can get one graded a PSA 7 for $38, so that’s quite a difference for one grade. If you just want a nice looking, mid-grade, ungraded copy, then that will run you about $15-$20. Lower grade copies (poor/fair/good condition) have sold for under $10 in auctions (not buy-it-now options).