Today’s Card of the Day celebrates a man acquired on this date in 1977, who was a big part of the 1979 World Series winning Pittsburgh Pirates. Phil Garner was part of a nine-player trade with the Oakland A’s 44 years ago today. The Pirates gave up a lot in the deal, and while it didn’t work out as far as value for both sides, I don’t think anyone in Pittsburgh cared after #3 batted .293 with 32 doubles, eight triples and 11 homers, while playing 150 games for the 1979 champs. They especially didn’t care after he hit .417 in the NLCS and .500 in the World Series. So today we look at a 2004 offering from Topps as part of their All-Time Fan Favorites set. It’s card #128 and it features Scrap Iron, Phil Garner. 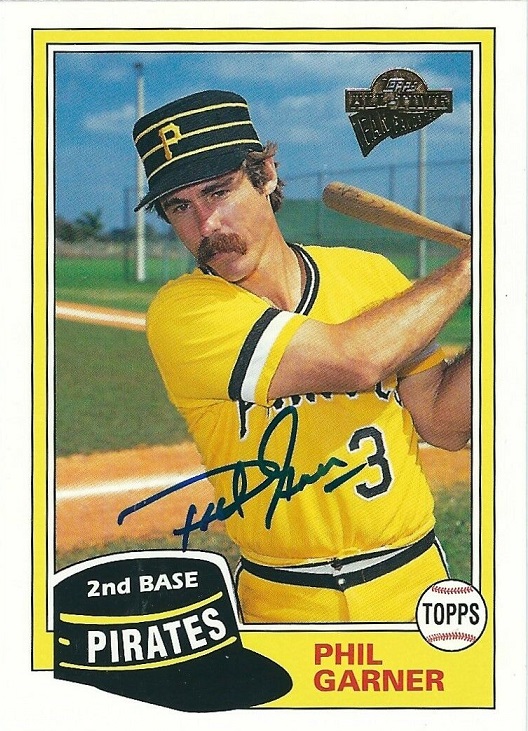 This is a great card for so many reasons. First thing is that I am a huge fan of the 1981 Topps design, especially the Pirates cards, which have the yellow borders and they used the pillbox caps for the team name/position. In 1981, Topps used a standard looking hat for all of the other teams, but the Pirates had the pillbox style. I’m not the biggest fan of the gold tops/gold pants uniforms from the mix-and-match era. That’s not to say I dislike it, just that the gold tops/black pants combo looked much better to me. However, this particular uniform really looks good with the 1981 Topps design and a glossy photo quality that really makes it stand out. Not only do they have the pillbox cap in the bottom left, he’s also wearing one. I really like the simple Topps logo design in the bottom right and the set name up top doesn’t take much away from the photo here.

This particular card is autographed, but the Garner card didn’t come autographed in packs. More on that below in the price section. 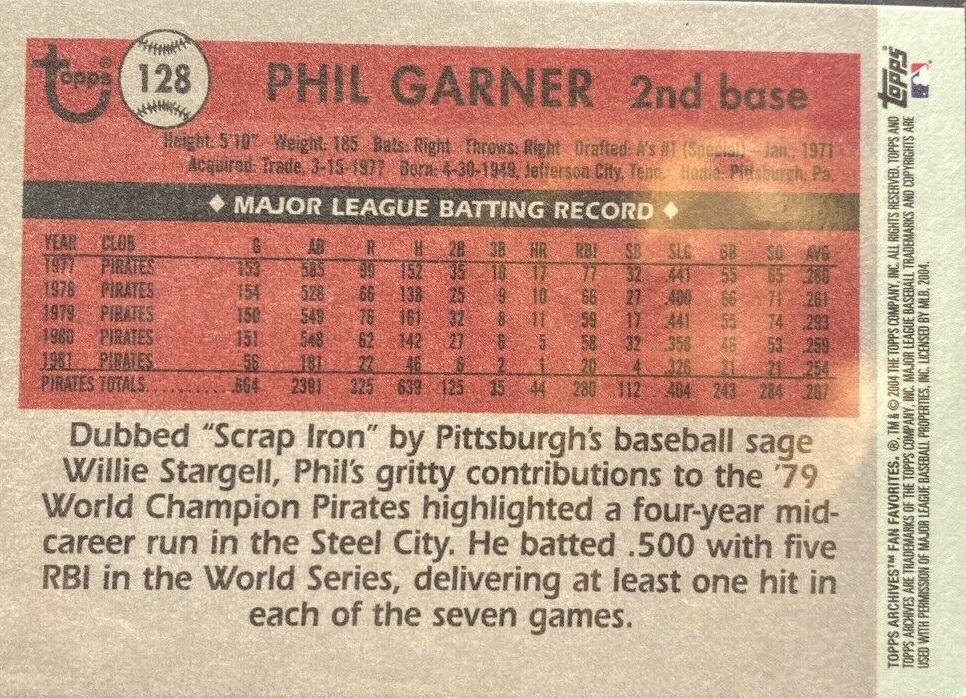 Earlier this week I had an article with a back scan that was subpar. This is another one where I couldn’t find a good back scan, though this one is nicer than the other one I used. It just has a glare from the plastic holder it was in, which makes some of the stats a bit difficult to read. Anyway, this back looks exactly like the 1981 design, except for that strip down the right side with all of the lawyer mumbo jumbo talk. It’s interesting to see that they chose to only include his stats from his time with the Pirates. They not only left off four seasons with the Oakland A’s (1973-76), they also included 1981 stats, which obviously wouldn’t be on an original 1981 Topps card. Just like with 1981 Topps cards for players who didn’t have a long career up to that point, the back has some nice little bio tidbits. However, the original cards had those fun facts only in cartoon form for most of them. Occasionally a player had such a short career up to that point that they had a line or two of bio between the stats and cartoons. There was clearly room here for the cartoons, but they scrapped it I guess (that was a little nickname humor).

This card can be found autographed on Ebay with a few options and that adds about $5-$10 to the value. The regular card is a common from the era and you can pick it up for $2-$3 delivered. Garner has a nice autograph, and the addition price isn’t that much, so you might want to consider that option. I think it looks great on this particular scan up top.

John Dreker
You can look through the record books all you want, you won’t find Jim McDaniel appearing in a regular season…