In 2003, Upper Deck issued a huge 990-card set called the 40-Man, which featured players on the 40-man rosters of the 30 Major League Baseball clubs. They didn’t include all of the players obviously because it would have been 1,200 cards, assuming every roster was full at the time. The set featured 26 players from the Pittsburgh Pirates (cards #688-#713), including a veteran All-Star outfielder named Kenny Lofton, who had a brief stint with the club, signing 18 years ago today, while getting traded away just four months later. Despite his late start with the team, well after the early 2003 sets were already in circulation, and his quick departure, Lofton had numerous Pirates cards available to choose from. I picked this particular card because I don’t have any from this set and I wanted to learn more about it. 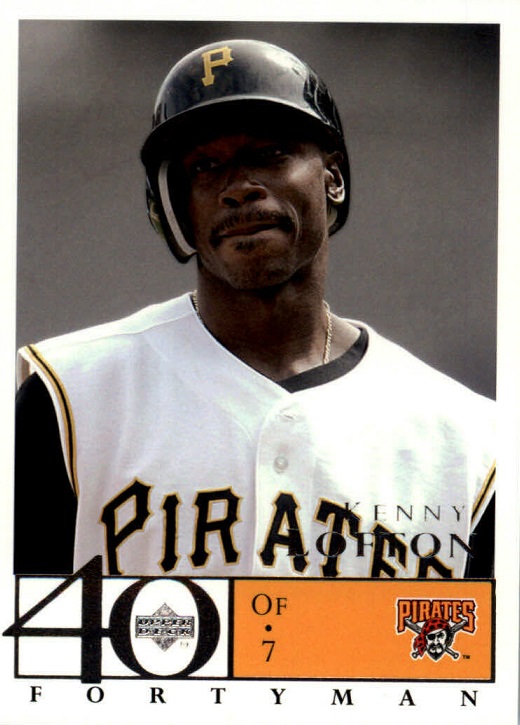 They certainly didn’t want to make the name easy to read here. You might not even notice it at first down in the bottom right hand corner of the photo, with much of his last name blending into the same colors on the Pirates jersey. This was one of the first chances to see Lofton on a baseball card picturing him with the Pirates. The Pirates were wearing the throwback sleeveless jerseys then and you see a decent view of it here with Lofton. This set went a little overboard on the front with the big “40” and writing out “FORTYMAN” on the bottom. I like the Pirates logo on front and the fact that they used team colors for every team in the box with the logo/position/uniform number.

That 2003 team had a lot of good feelings for fans going into the season, with the Pirates adding Lofton and Reggie Sanders late, after they already added players like Matt Stairs and Jeff Suppan earlier in the off-season. We know things didn’t work out, but it was still an exciting team to watch on offense that year, and Lofton at the top of the order was a big part of that club until late July. 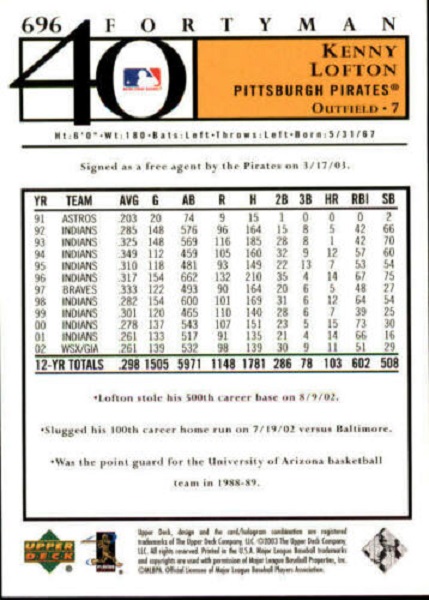 I looked around and couldn’t find a better back scan. Everybody who lists this card on Ebay is using the same small scan, which you can also find on some other sites for baseball cards. The giveaway is the photo centering at the bottom, which I left in the scan so you could see it was the same as every other available scan. Anyway, all you’re really missing is the stats here, which you can sort of still see…just don’t strain your eyes. Go to Baseball-Reference if you want to see them. There are notes at the bottom about the date of his 500th career steal and his 100th career homer, which both happened in 2002. It also notes that he was the point guard for the University of Arizona baseball team in 1988-89, before giving up basketball to play baseball full-time, which was obviously a wise choice. The date at the top says that he signed on March 17th, which is technically right you could say. Lofton agreed to the deal with the Pirates on March 14th, but it was officially announced three days later.

This card is your typical common on Ebay, even though Lofton was far from a common player. There aren’t many listed individually, and usually you’re paying more for the shipping than the card itself. Still, you can get it for $2-$3, with multiple options. Usually I’d suggest getting the team set here, but there aren’t any available for sale right now.