Today’s Card of the Day comes from the 1968 Topps set and features catcher/outfielder Gary Kolb, who was born 81 years ago today. He was a member of the 1968-69 Pittsburgh Pirates, playing a total of 105 games over his two seasons with the club. He’s also part of a select group. There have been 21 groups of relatives to play for the Pirates over the 139 years of the franchise. That includes Gary Kolb and his cousin Danny Kolb, who pitched for the 2007 Pirates. Gary Kolb had two Topps cards while he was with the Pirates and both had similar looks, so I went with the front design that I like the best. 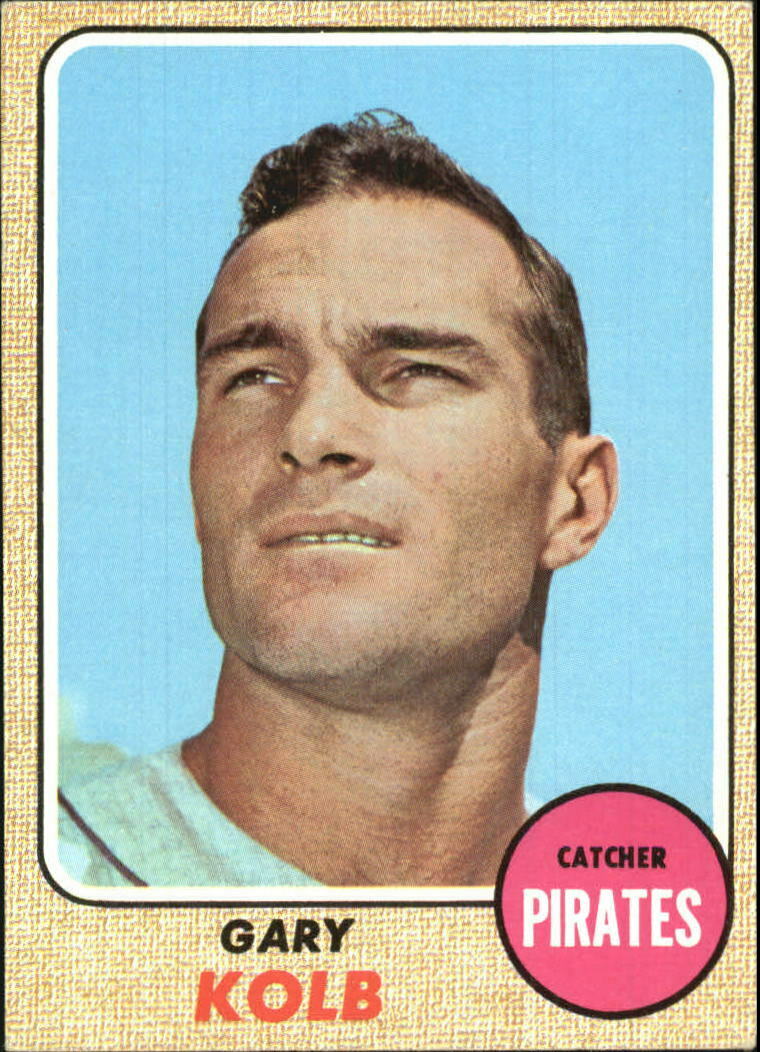 This looks more like a poster scene from an old western movie than it looks like a baseball card. Gary Kolb is The Catcher (of bad guys).

I like the 1968 Topps design. It might be my second favorite one from the 60s behind the 1962 set. The one drawback is that circle for the position/team is pink for all of the Pirates. I like when the color matches up with the team colors, which only happens on a few of the teams in this set. The color of the writing is different on some other team/position names as well, but all of the Pirates received black for the position, white for the team name.  The Boston Red Sox players also have the same exact colors for the circle/position/team. Every player in the set has their first name in black and their last name in red. I like the look of that.

This card has the early Topps photo trick that I have mentioned here before. Topps was smart enough to get photos of players with no cap on. That way if the player got traded, all they had to do was crop the photo close to his face and you don’t realize that he’s actually pictured on a different team. The uniform stripe here is the giveaway that it’s not the Pirates (It’s a Braves jersey), but most people aren’t going to realize that. It’s much better than some of their attempts at airbrushing. 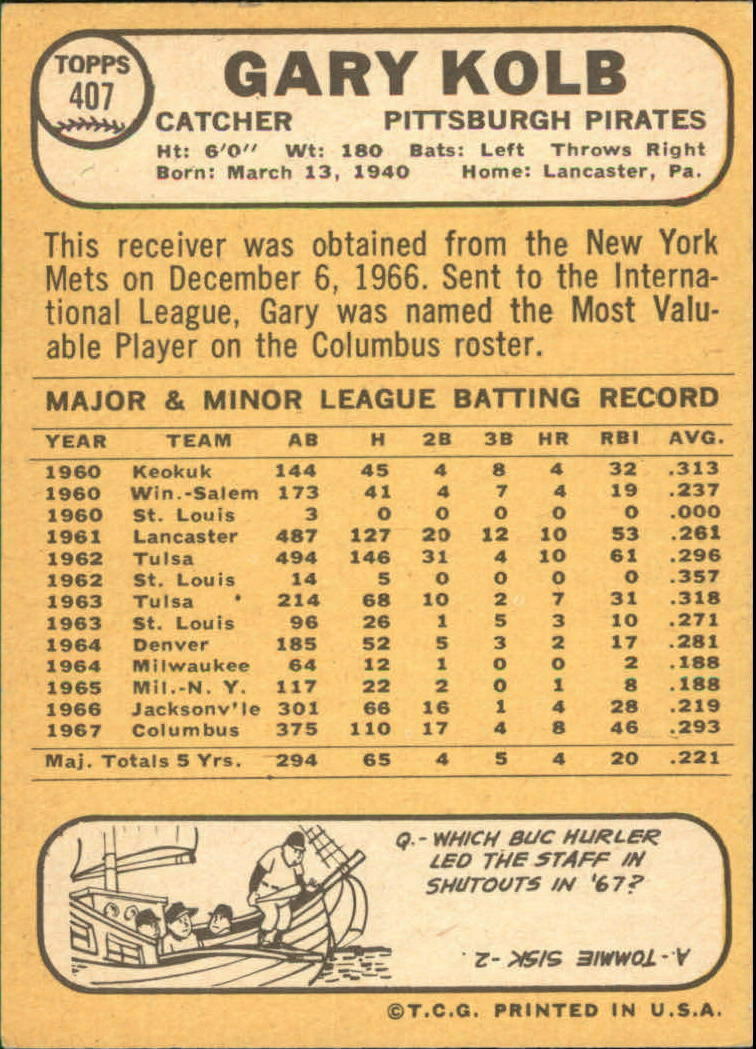 Funny story about the back here. Whenever I see a trivia question I try to answer it. For some reason I read this one as asking which pitcher led them in strikeouts. My guess was Bob Veale, which was correct for strikeouts…except that says shutouts. I still may have guessed Veale for shutouts, so I likely would have got it wrong anyway, but I didn’t put any real thought into it because Veale was the strikeout man for the Pirates at that time. I’m not 100% sure why a guy walking the plank signifies a shutout. I think cannonballs would have been better, since they’re in the shape of a zero.

As you can see, Kolb moved around a lot, which is why it was tough to get his photo in a particular uniform. It’s interesting (to me at least) that they put the stats from two big league teams together for 1965. It’s also interesting that he spent the previous two years in the minors, but he still got a card.

If you want to add card #407 from the 1968 Topps set to your growing collection of cards, then head over to Ebay and pick one up in decent shape for about $2-$3. Don’t buy the first one you see, there are numerous options in that range. Maybe you want a nicer one, say a PSA 10! The exclamation point is because I rarely see PSA 10 examples available for the cards we feature here. It’s a perfect card from 53 years ago. It’s one of 18 examples to get that grade from PSA, which is a fairly high number for a card that old. I guess kids weren’t putting Gary Kolb cards in their bicycle spokes. Anyway, the price is $200, which isn’t bad for a card this old. The fact that 18 exist in that grade keeps the price down. Here’s the thing though. If you don’t want to spend that much, but you want a really nice one, there are two examples graded PSA 9, which basically looks like a perfect 10 until you look way too close at the card. Those are selling for under $30 delivered. I’d be okay with one of those cards instead and put the rest of that money towards some other cards. To each his own.