Pittsburgh Pirates all-time great pitcher Vern Law has appeared in our Card of the Day features twice already, but never on his own. He first made an appearance on the 1959 Topps card titled “Buc Hill Aces”, where he was pictured alongside Roy Face, Bob Friend and Ron Kline. Law next showed up with his son in the 1985 Topps subset that pictured father/son combos. On his 91st birthday, it’s time to give the first Cy Young winner in team history his own spotlight. Here he is featured on his 1962 Topps card. 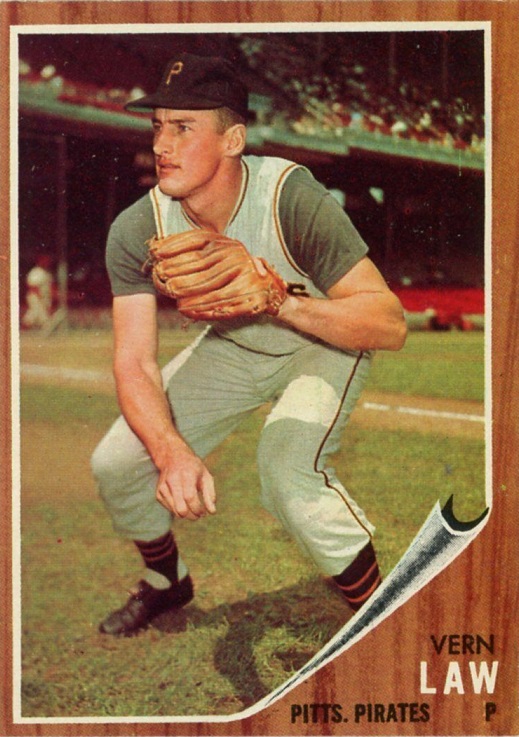 The 1962 Topps set has my favorite design from the 1960s. It’s the wood grain borders that catch my eye, which I know because my favorite offering from Topps in the 1980s is the 1987 set, which mimicked the 1962 design as a 25th anniversary hat tip. What the 1962 set has that the 1987 one doesn’t in the photo folding up in the bottom right corner, which is a nice added touch.

This Law pose is a classic pose from the early years of Topps. They got photos of players in staged action photos. Batters would have a follow through swing or they would be getting ready to field a grounder or pop up. The pitchers would either be looking in for the sign or you would see them in the follow-through from their delivery. If all else fails, you get the portrait  shot where they look just off to the side. You have to love the uniforms from this era, highlighted by the sleeveless jerseys, stirrups and simple, but class, black hat with the gold P. 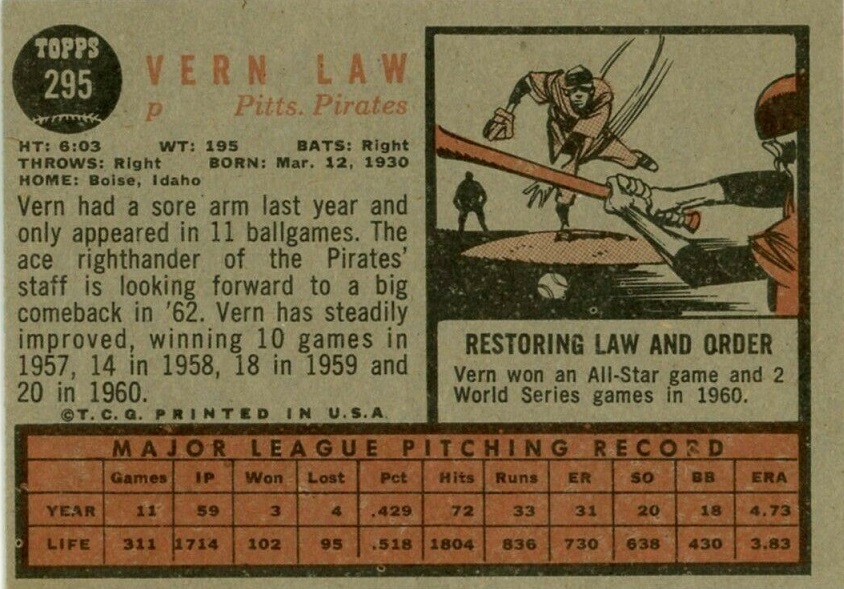 The back is limited on stats, which is a bit of a knock for the overall value, but that was typical of Topps from the era. You got the latest year of stats and the career total, while they focused more on a bio of the player. The cartoon on the side notes that Law won the All-Star game and two World Series games in 1960. Not mentioned anywhere on the back is the fact that he won the Cy Young award in 1960. They used to play two All-Star games back at this time and Law won the second game, starting against Whitey Ford. In the first game, teammate Bob Friend got the start and Law actually picked up the save. The back notes that he was limited to 11 games in 1961 due to a sore arm and he was hoping for a comeback season. In 1962, Law went 10-7, 3.94 in 139.1 innings.

If you’re interested in this card, you’ll be happy to know that it’s not expensive, especially if you’re okay with lower grade examples. Obviously 1962 Topps are tougher to find than newer cards, but it’s not difficult to get a card of a player like Law and have multiple options in the grade/price range you desire. I prefer the quantity over quality approach, so I go for a nice mid-grade card, where corner wear is fine, as long as the picture looks nice. You can get an example like that for around $5 delivered. One thing to note while looking through Ebay auctions for prices is that this card seems to have a lot of centering issues, so a nicely centered example will command a premium. Law has autographed quite a few of these examples over the years and that adds about $10 to the price. There are two PSA 8 examples of this card on Ebay, for approximately $400 each, though I’ll note that an auction for one ended just south of $300 not long ago. It’s a very tough card to find in that grade, which is reflected in the price. Further proof of that is the fact that his PSA 7 card, just one grade lower, recently sold for $33. That’s quite a difference.