Today’s Card of the Day celebrates the man who was born 76 years ago today. Dock Ellis pitched for the Pittsburgh Pirates from 1968 until 1975, then returned during the 1979 season. This is the first time that he’s featured in this series, and I purposely waited a bit once I realized that so his first appearance would coincide with his birthday. That being said, he should have been here a bit sooner, as a great pitcher in team history, with a no-hitter to his credit and he was part of two World Series winning teams. I had all of his Pirates cards to choose from since this is his first time, and I decided to go with my favorite. Today’s Card of the Day is #575 from the 1973 Topps set, featuring Dock Ellis. 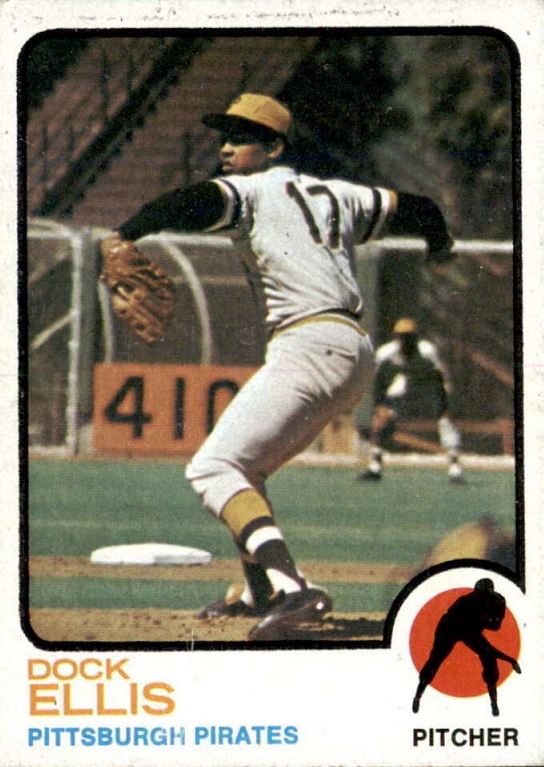 Topps tried out some action photos for the 1973 set and they substituted photo quality for better types of photos. There were as many staged batting/fielding/pitching cards, or just random portraits. This Ellis card obviously isn’t a high quality photo, but I like it a lot better than his previous offerings from Topps because it’s an in-game action shot. Scroll through some 1973 Topps scans and you’ll see that this is one of the better action photos as far as quality, but there are some great game action shots that make up for the lack of quality.

Their attempt at better photos actually appeals to me now because the lack of quality to the photos actually makes them appear older. This Ellis card is great though, with the old uniform, his familiar #17 showing on his back (I didn’t realize until today that he wore four different numbers with the Pirates). I also like that you can see the blurry top of the catcher at the bottom. It makes you feel like the photo was taken by the umpire. 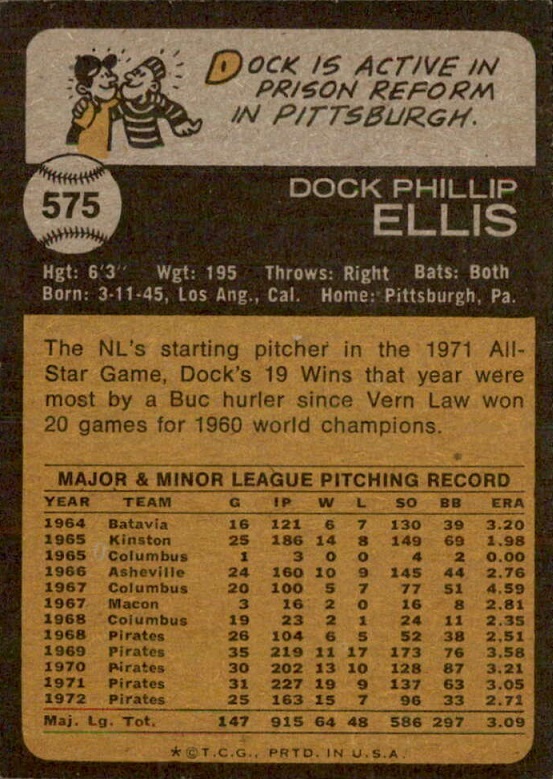 The back has room for everything available on the 1973 backs because his career was the perfect length at the time. You don’t get everything with veteran players because they had too many lines of stats. All of the cards came with a cartoon at the top that was an interesting fact about the player, though most were baseball related, which obviously isn’t the case here. Using Roberto Clemente as an example, they highlighted his 3,000th hit. Clemente had his entire MLB career on the back for stats, plus his one minor league season, so his card didn’t have room for the little bio info section that you see here. That little factoid about Ellis is a great one, telling you he was a starting pitcher in the All-Star game, while noting the historic value of his stats that season, as far as their place in Pirates team history. Then it’s all topped off by his complete minor league and Major League stats. As you can see, Ellis also had a pretty good season after his All-Star year.

If you’re interested in this card, you’re like a lot of other people. There are a lot more examples listed under sold auctions on Ebay than the active auctions. The average price for the sold ones has been about $10, but they have sold for as little as $2 in mid-grade. There’s currently a PSA 9 on Ebay for $90. While the price might seem a little high, you would have a hard time finding a nicer one. This is a tougher card to find because it’s from the final series, known as high series cards in the baseball collecting world. Topps released this set in five series and just like in previous years, the final series cards can be more difficult to find.