If you’ve read our previous One Who Got Away features, then you know the general feel to them. A young player with the Pittsburgh Pirates is moved before he becomes a star player elsewhere. This one is a bit different, but it fits here because of the historical context. William “Dummy” Hoy (don’t worry, he was fine with the nickname and used it himself) was a deaf-mute, who is the best deaf player of all-time. He also once belonged to the Pittsburgh Pirates, something that I just learned days before I wrote this article.

Hoy played in the majors from 1888 until 1902. He ended up living a long life, passing away at 99 years old in 1961. Not only was he the oldest living player at the time, but he was also active around baseball, throwing out the first pitch twice that season. Hoy was a small guy at 5’6″, 160 pounds, but he could hit, run and throw with the best of them. He batted .288 in his 14-year career, while also drawing 1,006 walks and stealing 596 bases. He had 82 steals as a rookie to lead the National League. He also led the league with 117 walks (with just 25 strikeouts) in 1891, and 86 walks in 1901 when he played in the American League. He spent time in the American Association and the Player’s League, making him one of a few players to see action in four different Major Leagues. Hoy had 2,048 hits and scored 1,429 runs in 1,797 games. He had nine seasons in which he scored over 100 runs.

While modern day defensive metrics don’t do his career any favors, he was known as a strong outfielder during his day due to his speed and arm. He played shallow, but could go back on balls as well as anyone according to many reports made during his career. Modern stats for defensive WAR credits (or discredits) him with -10.8 dWAR, bringing down his career total to 32.6 WAR. He’s not the first 19th century player who was praised for his defense, but gets knocked down by modern metrics. The fact that he was a full-time center fielder speaks volumes to his level of play. Hoy couldn’t talk obviously, but he made what were described as “squeaking sounds” and the other fielders knew he had the ball. On balls hit to his sides, the other outfielders listened for him instead of calling for the ball.

That’s the background on Hoy, who has had a major push over the years to get him elected to the Hall of Fame. His stats don’t exactly line up with other great players from his day, but when you factor in his obstacles, including the fact that he got a late start with playing baseball, he certainly seems deserving.  You can read much more on Hoy elsewhere (I’ve included a video link below), which I’ve done over the years, but this is about his time with the Pittsburgh Pirates, which I’ve never read before.

Everyone here should know about the famous Honus Wagner trade. The Pittsburgh Pirates acquired 12 players in a December 1899 trade with the Louisville Colonels, which turned the Pirates into a powerhouse. They kept their own best players, but added Hall of Famers Honus Wagner, Fred Clarke, Rube Waddell, as well as key contributors in Tommy Leach, Deacon Phillippe and Claude Ritchey, which helped the Pirates to the 1901-03 NL pennants. With four of those players still around year later, they also won the 1909 World Series title. It was a major turning point for the Pirates as a franchise. Before the trade, they had 18 seasons without a first place finish.

The Honus Wagner deal happened because Barney Dreyfuss was involved with Louisville before making his move to the Pirates full-time, where he became a Hall of Fame owner. The Louisville club was likely to be cut from the NL at the time, with talks of the league going from 12 teams down to eight clubs. Louisville was willing to play in 1900 and there was talk that Hoy would be their player-manager if the club continued to play. However, they spent a lot more than they made in 1899 and the trade with Pittsburgh helped cut costs, while also allowing Dreyfuss to part ways with the team that he had stock/interest in. When the decision by the NL to have just eight teams came down, the remaining Louisville players were transferred to control of the Pirates. Hoy was in that group. In 1899, he led the league in games played, plate appearances and at-bats, while putting up a .305 average and 33 stolen bases. He was already 37 years old at the time, but he clearly showed that he could still play.

The first mention of Hoy with the Pirates came on February 26, 1900 in the Pittsburgh Press. They listed a roster of 36 players whose rights were controlled by the Pirates. 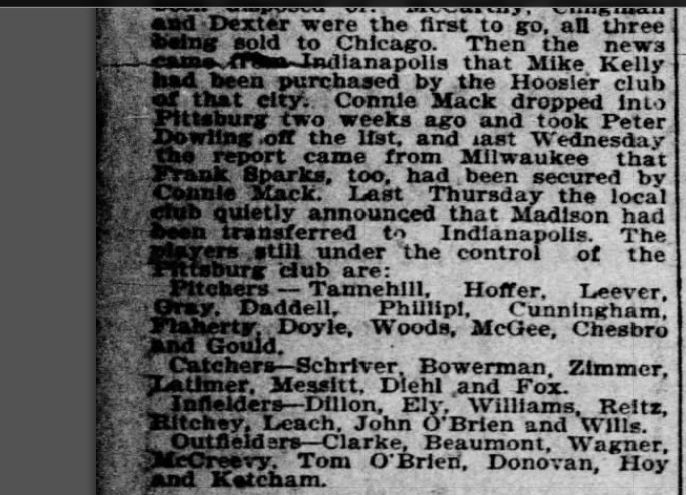 You might notice right away a good reason that the Pirates didn’t keep Hoy for 1900.  That outfield has two Hall of Famers in Wagner and Clarke, as well as Ginger Beaumont, who hit .352 as a rookie in 1899, and he was just a few years away from a batting title. Hoy still would have been a good player to keep as an extra, but he would have been paid like a starter if he stayed with the Pirates, and clubs paying full price for an extra player rarely happened during that era.

Fred Clarke announced a group of players on March 1st who would go to Spring Training with the club. There were only 18 names on that list and Hoy wasn’t one of them. He decided at that time that Tom O’Brien and Tom McCreery would be the extra outfielders.

Finally on March 13th, the Pittsburgh Press announced that Hoy was “released some time ago”. It didn’t go into any detail that day, but more research uncovered news that they didn’t even try to move him, which is what they did with many of the other players they inherited from Louisville. Hoy announced it himself in the Cincinnati Times-Star, writing that he wasn’t offered a contract by the Pirates by March 1st, which was required in order for a team to retain a player’s rights. That made Hoy a free agent.

So his time officially as a member of the Pittsburgh Pirates didn’t last long. That announcement that he was on their roster on February 26th wasn’t his first official day under team control, that date was a little earlier in the month, but February 28th was definitely his final day with the team. While they clearly decided to move on from him before then, not offering him a contract brought an end to his brief stint under control of the club.

Hoy is a historical figure in baseball, especially if you study 19th century baseball. He is one of the more well-known players from that era. He would have been an interesting player to have as a former member of the Pirates for these history columns, even if his stay was short. So you might ask, what exactly did they give up by letting him go for nothing?

Hoy played in the American League in 1900, one year before it became classified as a Major League. He hit .254 in 137 games, scoring 115 runs. He remained with the Chicago White Sox the next year, returning him to the majors, even though he didn’t change teams. He hit .294 in 142 games, with 112 runs scored. In 1902, he played for the Reds and batted .290 in 72 games, which was his last MLB action. Hoy played in the Pacific Coast League in 1903 before retiring from baseball.

He was still a good player, so he would have strengthened the 1900 Pirates, though his playing time would have been limited. You could also make a case that Honus Wagner could have covered first base, where Duff Cooley hit .201 in 66 games. You could also say that numbers put up by outfielder Tom McCreery (.220 average) would have been upgraded by the decision to keep Hoy instead. It didn’t happen though, but now you know that the Pirates briefly had one of the greats of the 19th century.

If you want more on Hoy, I’d suggest this movie.