Today’s Card of the Day comes from one of my favorite post-WWII sets and it features Pittsburgh Pirates catcher Toby Atwell, who was born 97 years ago today. The 1955 Bowman set featured a unique design that makes it highly collectible to this day. Atwell was in his third season with the Pirates at that point, coming over from the Chicago Cubs as part of the huge Ralph Kiner deal. There were high hopes for the 31-year-old going into 1955. He had a solid season at the plate and played his best defense in 1954. Everything was looking up for the 1955 season, just like Atwell on his 1955 Bowman card. 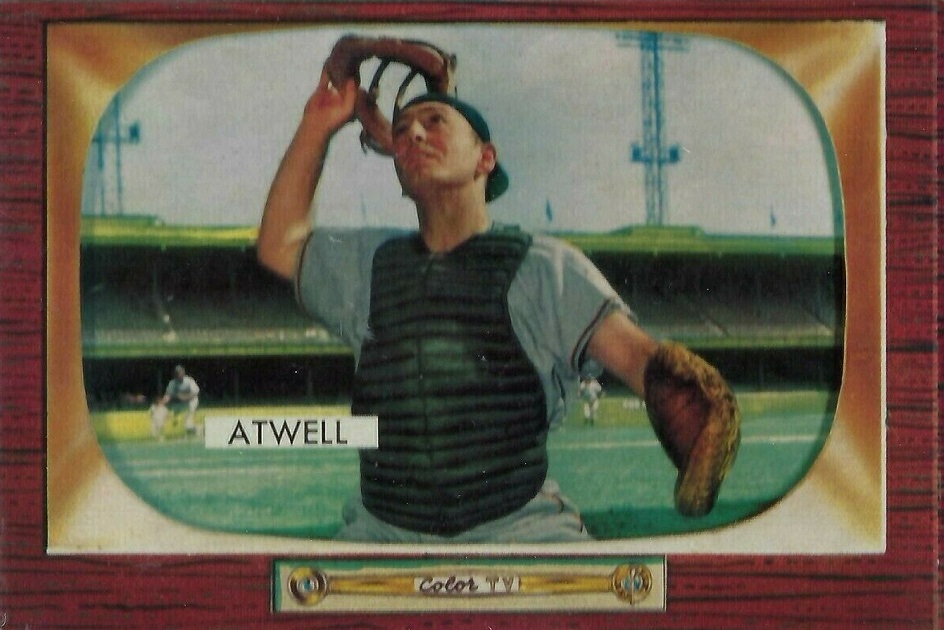 I absolutely love the design choice here, with the borders and photo frame looking like an old style (new back then) television set. Right in the middle underneath the photo is a little fancy design with “color TV” written on it. In 1955, that was a big deal, just two years after color TV’s became a thing. Since these cards came out in 1955, the design was already in the works at some point in 1954, not long after the first color TV program hit the air late in 1953.

The photo selection here is great, but it was also similar to many other cards in the set (try searching for catchers looking up in the air, he’s not the only one). The horizontal images on every card limited the photo choices, so there are quite a few that are cropped from the waist up like this one. Obviously it wasn’t done intentionally, but the printing for the name looks like it’s close captioned writing. Bowman chose to just put last names on the front of cards this year.

This was the last year for Bowman, who got bought out by Topps late in the year. They definitely saved the best for last. Topps would later bring back the Bowman name and still produces sets today by that name. 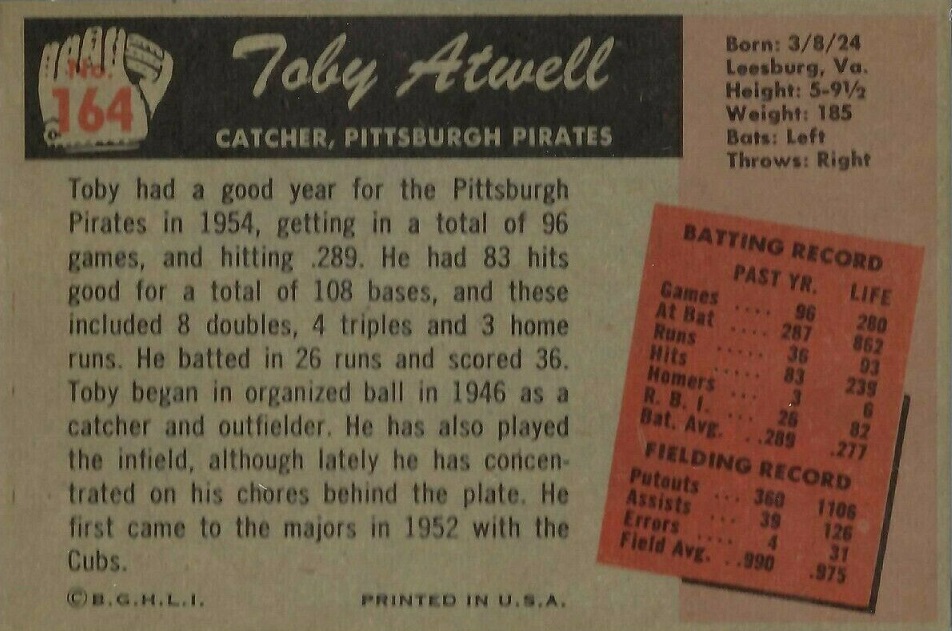 The bio on back mostly talks about his solid season in 1954. While it doesn’t mention his improved defense, there are defensive stats on the back. That’s something that you rarely see on baseball cards, though it was just slightly more popular to do in the earlier days of the hobby. This set went more for the bio section than the stats, including just seven categories on offense, with just the 1954 starts and the career stats for each player. I don’t mind that decision. It’s nice to read up on the players, though you would think that the Ralph Kiner trade would deserve at least a brief mention here.

This card comes from an extremely popular set with collectors, so while it’s far from as common as cards from the late 80s and early 90s, it’s extremely easy to find on Ebay. It buys/sells at a high volume because a lot of people are putting the set together. There are currently (as of the time of this writing) 175 examples for sale on Ebay. The good thing about the high volume of trading is that it keeps the price down on the card, while also giving you a lot of condition/price options if you’re interested in picking one up. If you just want a presentable one that has been loved over the years, you can get it as cheap as $3 delivered. If you want to go to the opposite end, there are three graded PSA 8 for sale right now, with the lowest priced one going for $80. Go down just one grade and it can be had for about $30 and looks almost as nice. There’s also an autographed copy for $40.