The Card of the Day usually has something to do with one of the subjects from the morning history article. However, sometimes I switch things up to feature a card of a player who hasn’t appeared in this series yet. We are well over 100 articles in now, so we shouldn’t be missing many big name players if I’m doing an acceptable job. One of those missing players can no longer claim their snubbing after today. That’s because today’s Card of the Day comes from the 1987 Donruss set and it features Bob Walk. 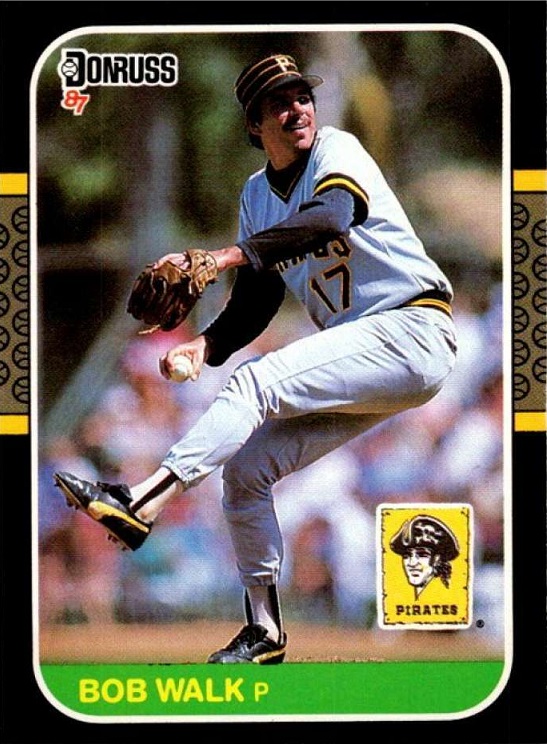 I’ve mentioned it here before, but the 1987 Donruss set is my favorite Donruss design of all of their sets. I once had a scholarly discussion with someone in which we named our favorite designs from eras and one of those eras was the 1980s, picking our favorite Topps, Donruss and Fleer designs from the decade. Purely by coincidence, my three favorite were all from 1987. This border has a bold black that really makes mint condition cards from the set stand out. With the Pirates cards specifically, the old logo figuring prominently in the bottom corner really adds to the look. That’s on top of the fact that I like those late 1980s uniforms. Plus the black and yellow in the border has a look of the cards being specific to the Pirates. Probably the only thing I’d change is the green background for the name/position at the bottom, but it’s fine. This is a great action photo of Walk as well. Just a great looking card all around. 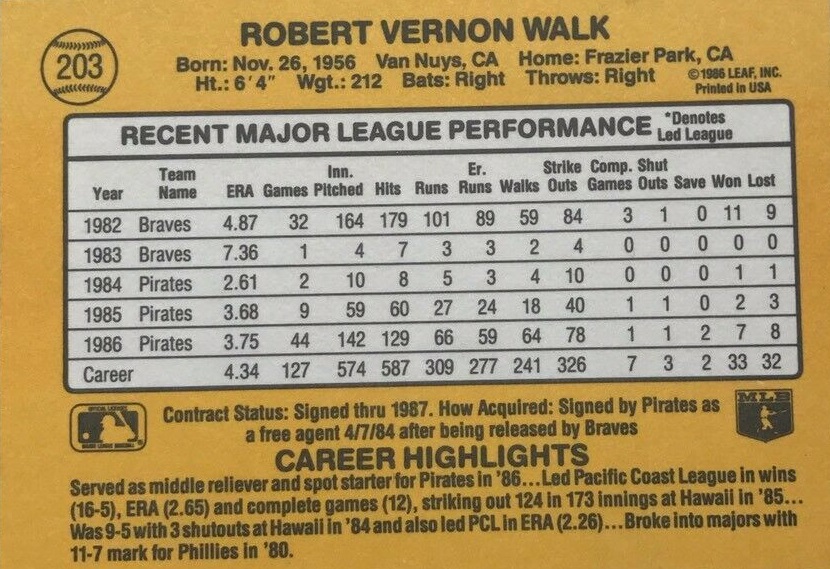 It was a lot more difficult to find a good back scan for this card than it was for a good front scan. A few were too blurry, one was scanned too bright, one had a watermark on the back. Another looked awful when embiggened. That’s the not-so-interesting story about why this scan is crooked and cropped strange.

One of the things that I didn’t like about Donruss cards is that they didn’t have the complete stats for players who were around for more than five seasons. They included their career stats at the bottom, but not the year-by-year stats prior to 1982. In the career highlights section, they mention some facts about his minor league career, which was a big portion of his first two seasons with the Pirates. They also tell you exactly how much is missing from the stats, Walk’s 1980-81 season. They let you know that he had an 11-7 record for the Philadelphia Phillies in 1980, but for some reason, despite obvious room for it on the final line, they fail to mention that he helped them to a World Series title that year. In fact, he won his only World Series start, though he gave up six runs, so he didn’t exactly pitch great. A win in the World Series is big regardless of how you got it.

One overlooked great part about the Donruss cards during this time is the contract status, listed between the stats and highlights. While writing the bios for some players, I’ve had some difficulties finding the contract status of a player who was traded, and then found that information on the back of a card.

This is a common card from a set that is easy to find, so if you heard on over to Ebay, you should find multiple options in the $2-$3 range. You can even find a few examples that are autographed, and Walk has a very nice autograph.