We are lucky enough here to have contributors from time-to-time, including a gentleman named Kevin Cummings, who is a 19th century baseball expert. He has posted articles here in the past on the 1886-90 N172 Old Judge set, as well as a memorabilia article. I have linked all of his previous articles posted here at the bottom of this page. Today he looks at Alleghenys outfielder/pitcher John Coleman, who had two stints with the team. He was an outfielder during the 1886-88 seasons and he came back briefly as a pitcher during the disastrous 1890 season. This is an in depth look at the name named John Coleman, along with a look at one of his poses/variations from the 1887 Old Judge set.

Here’s the card, so you can get a good visual of the man you’re going to read about below: 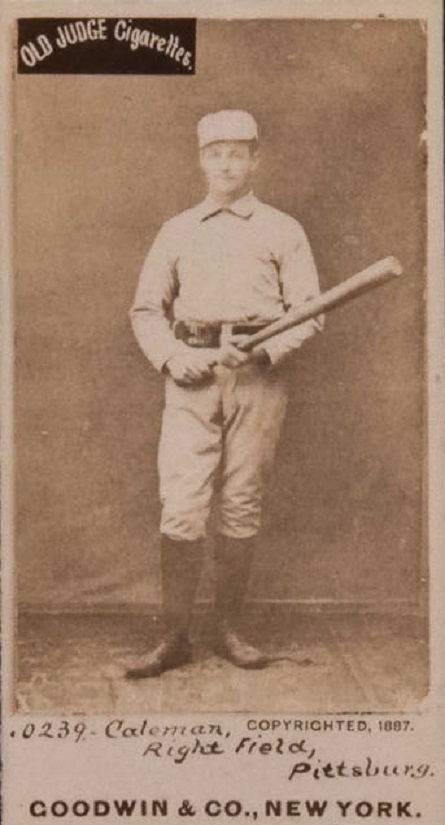 The Baseball Life of John Coleman

There is some uncertainty as to exactly where and when John Francis “Jack” Coleman was born. Baseball-Reference.com has that data listed as March 6, 1863 in Saratoga Springs, New York, apparently taken from a December 23, 1893 profile of him in the New York Clipper. Alternately, SABR’s Biography Project suggests he was born in Illinois around 1860 based on US Census records. Coleman’s death certificate, however, says he was born in 1855. No matter. One fact is incontrovertible – Jack Coleman owns a Major League baseball record that will likely never be broken: as a pitcher he lost 48 games in his rookie 1883 season! That performance alone got him some consideration as the “Worst Major Leaguer In The Nineteenth Century” in David Nemec’s book The Great Encyclopedia of 19th Century Major League Baseball, but, in truth, that charge was unwarranted because Coleman was better than that.

The April 15, 1883 issue of The Sporting Life said that Coleman had been signed in November 1882 by the Philadelphia Quakers, a new team to the National League, as their fourth pitcher, but there was “…not much known about him…” He came with some very good statistics based on his work in 1882 for the Peoria Reds, but they were only a semipro team who often played against amateurs. There was also a rumor Coleman had thrown a baseball 121 yards and 6 inches…underhanded! In the first exhibition game ever for the Quakers on April 2, he no-hit and shut out the Ashland amateur team. Things continued on a high note for him with exhibition wins over the Baltimore Orioles on April 7 (The Sporting Life said that “…Coleman’s pitching proved a stumbling block…”) and the Philadelphia Athletics on April 16 (The Sporting Life said “Coleman’s pitching was very effective…”). Management, coaches, and fans alike thought they had signed a budding star.

The wheels began to fall off, however, during the first week of the regular season. Despite Coleman pitching passably, Philadelphia lost both of its first two games to the Providence Grays in the late innings. Thus began the all-too-frequent season-long litany about the poor/untimely hitting and poor fielding of the Quakers by the columnists of The Sporting Life. Coleman got his first career win (an 11-inning 4-3 victory) on May 15 against Detroit. The Sporting Life commented that “…Coleman pitched extremely well…” But by the end of May, Philadelphia had a 4 – 16 record and Coleman had started 15 of the games.

The rest of the 1883 season was much of the same. And the preseason quote about Coleman being the fourth pitcher was laughable. For most of the season the team did not have even two capable hurlers. Despite the club’s poor inaugural season record (17 wins and 81 losses, good for last place – 46 games behind Boston) Jack pitched quite well at times. Among his 12 wins, he beat HOFer Pud Galvin four times as well as outdueling HOFer Mickey Welch once. He also tossed three shutouts. Coleman’s 4.87 ERA and 48 losses really spoke more to his teammates’ ineptitude with their gloves (dead last in the league in every meaningful fielding category) and their bats (also the worst in the league) than his own pitching. Due to the club’s small roster, though, the exhausted Coleman was forced to pitch to the point where he severely permanently damaged his arm.

On the few days he did not pitch, he was used as an outfielder despite his aching arm. Though he was not the best fielder or hitter, he was not the worst either. Jack had 32 RBIs, good for third on the team. His ability in the field and at bat extended his career, though it would not be with the Quakers. Their acquisition of Charlie Ferguson and Bill Vinton to pitch in 1884 combined with Coleman’s still-lame arm forced manager Harry Wright to release Jack in mid-August. He latched on with the cross-town Philadelphia Athletics of the American Association. Manager Lon Knight, well aware of Coleman’s arm issue, used him almost exclusively in the outfield. His lackluster second-half performance in the field and at bat for the Athletics did not bode well, but the Athletics retained him anyway as an outfielder and change-pitcher for 1885.

With new manager Harry Stovey relying almost exclusively on Bobby Mathews as his pitcher for 1885, Coleman pitched in just eight games all season. That was fine with Jack since his arm was not 100%. Despite the pain, he did contribute two wins, three complete games, and a 3.43 ERA. Although Jack’s fielding did not put him at the top of the league, his 23 outfield assists were ranked fourth. He did, however, respond solidly with his bat: Coleman ranked in the top ten in average (.299), on-base percentage, slugging percentage, OPS, and RBIs. Jack’s attitude also improved as he got married, moved permanently to Philadelphia, and began his off-season training regimen for the 1886 season. In addition, Coleman’s play made history on May 10 against Saint Louis resulting directly in a rule change. Athletics pitcher Mathews hurt his hand early in the game and initially just swapped positions with right fielder Knight. When it became apparent that Mathews could no longer play at all, the Athletics were without a substitute. It just so happened that Jack had a day off and was observing from the stands. As The Sporting Life reported it, “…In the sixth he [Mathews] suffered greatly and had to leave the field, Coleman taking his place in right and playing in citizens clothes…” He even singled in one of his two at-bats.

Jack started the 1886 season as the Athletics’ right fielder and clean-up hitter, but he tailed off from his 1885 numbers. His average dropped to .246, but he still had decent power and speed numbers (16 triples and 28 stolen bases), drove in 65 runs, and even chipped in pitching three games with a 2.61 ERA. Even so, the Athletics dismissed Coleman in September. The rival Pittsburgh Allegheneys, looking for some stretch-run help signed Jack and positioned him in left field. His confidence was renewed and he finished strongly with a .349 average and 9 RBIs in 11 games.

During the 1886 off-season, the Allegheneys became the first team to move from the American Association to the National League. They were miffed at the perceived unfair treatment they received in the dual signing of Sam Barkley by Pittsburgh and Baltimore. Despite Coleman’s self-imposed training regimen, his arm was still not up to being a full-time pitcher. The Allegehneys agreed and 1887 was the first season Jack was solely a field player. Despite having the pitchers and hitters that suggested better, the Allegheneys managed but a sixth-place finish. Unburdened from pitching, Coleman had the best season of his career with a .293 average, 54 RBIs, 25 stolen bases, and an .899 fielding percentage, exceeding the league average for right fielders. In their July 7 issue, The Sporting Life even commented, “…It is hard to realize to see his field work here that it is the same Coleman…”

During the 1887 off-season, Jack came down with an undisclosed illness. It was reported that he was bedridden for several months, but some surmised it was just a contract negotiating ploy since other reports said he was back in the gym by March. The Allegheneys were still concerned with the condition of Coleman’s throwing arm, so they planned for him to be a first baseman and signed Billy Sunday to play right field, yet on Opening Day, Jack was back in right field. Apparently, Jack’s illness was not feigned because his play for the entire month of April and most of May was lackluster. His play for the rest of the season was streaky at best. The magic had gone out of his bat, although his glove work was still superb – a .928 fielding percentage (better than the league average) and 20 outfield assists. Despite his best attempts to maintain his condition in the 1888 off-season, the Allegheneys believed Coleman was damaged goods and though they initially reserved him, they eventually gave Jack his release on April 26, 1889.

For the next two years, Jack tried desperately (even occasionally employing an old-style underhand delivery) to latch on as a pitcher with another professional baseball team. He signed with the Athletics again in 1889 and pitched well for them in the five starts he made – three wins and a 2.91 ERA – but everyone knew his arm could not withstand the rigors of an entire Major League season. He started with the Toronto Canucks of the International Association in 1890. His solid play there in Spring won him some time with the player-desperate Pittsburgh Alleghenys. After his second losing pitching effort with them, though, Coleman’s Major League career ended on July 18. He continued to play for various minor league and semi-pro teams as both a pitcher and a fielder through at least 1903 with varying levels of success.

When his baseball playing days were completely behind him, Jack became interested in myriad other athletic activities and professions – including baseball umpire, baseball manager, boxing referee, and professional trainer – none of which seemed to occupy him for very long, if at all. After decades of living in Pennsylvania, Coleman moved to Detroit around 1912, where he found steady work in a bowling alley. He died on May 31, 1922 after being hit by a car. While Jack is most remembered for his amazingly futile rookie season, one has to wonder how different his career might have been if his first team did not permanently ruin his arm through overuse. He should also be remembered as someone who believed in year-round physical fitness, especially during the off-season, when most of his peers were doing all their heavy lifting in saloons. Finally, Coleman should ultimately be recognized for the competitive spirit that drove him to be a better fielder and batter so he could continue playing the game he loved for as long as he could.

Here are the other offerings from Mr Cummings