Obviously I was going to use a Kent Tekulve card today with it being his birthday, but I went into my decision open-minded, other than the fact that it definitely wouldn’t be showing him on those other two teams he played for after leaving the Pittsburgh Pirates. I actually haven’t featured Tekulve in this series yet and I wasn’t specifically waiting for his birthday, but this was the longest I could wait before getting him in this series. I went to Ebay and started scrolling through his cards. His rookie card would have been a great choice, but I’ll save it for another day. I really wanted to use his 1981 Topps card, but I feel like I talk about that set too much. I just really like the design, so whenever a player comes up who is in that set, I am tempted to use it. Anyway, I went with this particular card because I’ve already mentioned it here. Today’s Card of the Day is card #18 from the 1983 Topps set, Super Veteran Kent Tekulve. 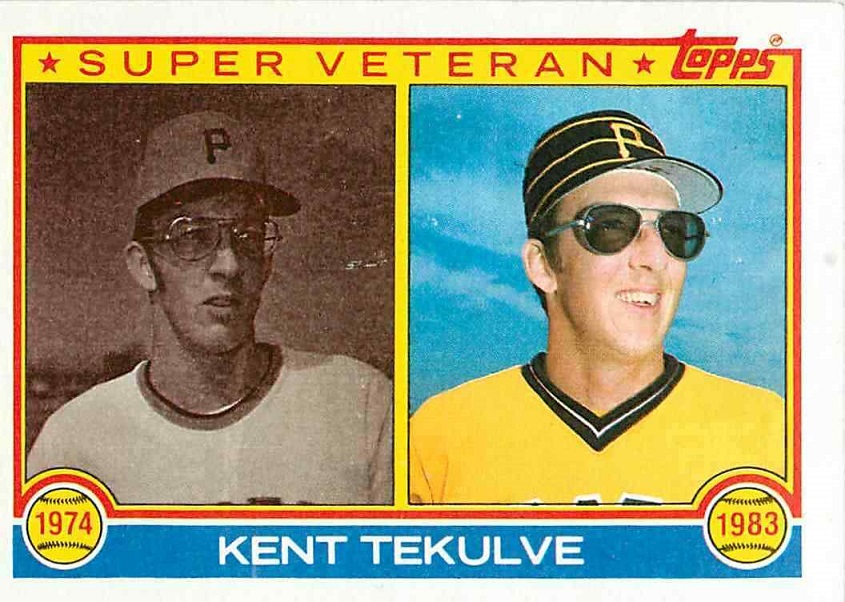 A quick lesson to explain the Super Veteran series. It was a 35-card subset in the 1983 set, which featured veteran players, showing them during their first season in the majors and their current season, I guess so you could see how much they have changed over the years. The baseballs in the bottom corners had the years for each photo, with the second one always being 1983. As mentioned in the link above, Tekulve is the only Super Veteran shown with the Pirates in both photos. Topps also included Gene Garber and Al Oliver in the subset, both shown with the Pirates in the earlier photo, but not the later one. 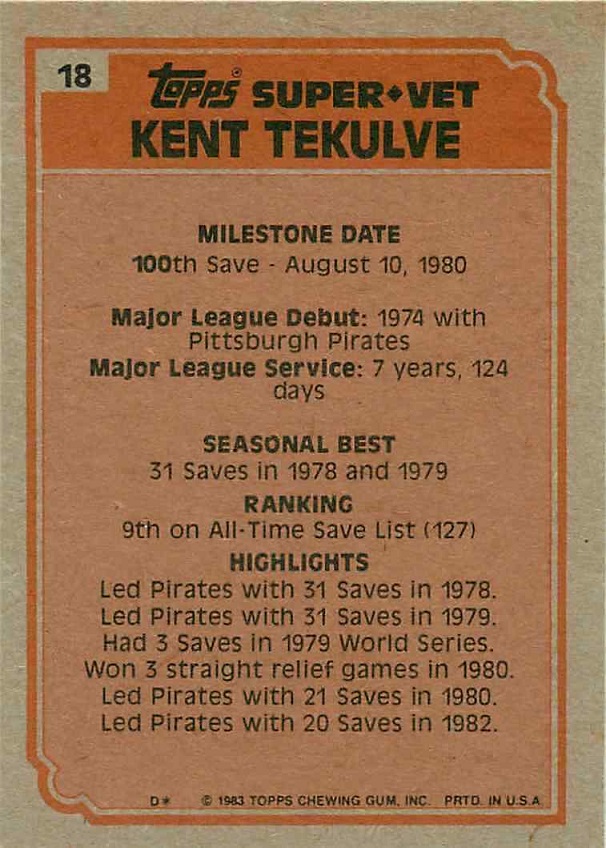 The back of each Super Veteran card shows the major highlights of their career. I think most everyone would agree that Tekulve’s career highlight is being on the mound for the final out of the 1979 World Series. The back of this card sort of alludes to that by saying that he had three saves in the 1979 World Series, it just doesn’t mention that the third save came in game seven. His other highlights include leading the Pirates in saves four times, and the time that he picked up wins in three straight relief appearances during the 1980 season. Let’s focus on that last fact for a second.

This mini streak of wins happened on May 6th, 7th and 9th. The first two at Three Rivers Stadium against the Los Angeles Dodgers, the third one coming on the road against the San Diego Padres. In game one, Tekulve threw a scoreless ninth to keep it a 1-1 score. In the bottom of the inning, the Pirates had back-to-back singles, followed by an intentional walk, which loaded the bases with no outs. Phil Garner walked it off with a single.

In game two, Tekulve came on in the 7th inning with a 6-5 lead and two men on base. Steve Garvey singled to tie it. The Pirates took the lead in the bottom of the seventh on a Dave Parker homer, then Tekulve held the lead, throwing 2.1 innings without a run charged to him.

The Pirates were off on May 8th due to travel, so it was quite literally three games in a row and not just three straight appearances. Tekulve came on with a tie score in the bottom of the eighth and retired the side. Bill Madlock brought home Omar Moreno with a sacrifice fly in the top of the ninth, then Tekulve shut down the Padres in the bottom of the inning. He moved to 5-0 on the season…then finished with an 8-12 record.

It’s quite interesting to note that 127 saves ranked him ninth all-time at the time. Right now if a pitcher had 127 saves, they would rank tied for 116th place. Times have changed.

This card is a common from the 1983 set and it’s quite easy to find on Ebay, who should really be sponsoring this series because I mention them enough. You’ll pay $2-$3, which will include delivery. Three people also have this card autographed and for sale. One of those cards is graded, which authenticates the signature. Happy shopping.