I once took a quiz to name all of the Pittsburgh Pirates home run leaders for each season. I got all of the answers correct except 1994. That year, Brian Hunter played 76 games for the Pirates before he was traded to the Cincinnati Reds for minor league outfielder Micah Franklin. It was a strike-shortened season, so the Pirates only played a total of 114 games that year, but Hunter finished as the team leader with 11 homers. Dave Clark was second with ten homers. It’s not like the Pirates were devoid of talent at that point, even though it was at the front end of “the streak”. Their lineup still had Andy Van Slyke, Jay Bell, Jeff King, Al Martin, Don Slaught, Orlando Merced and Carlos Garcia. Hunter turns 53 years old today, so we celebrate his birthday and honor his team home run title with today’s Card of the Day, coming from the 1994 Flair set. 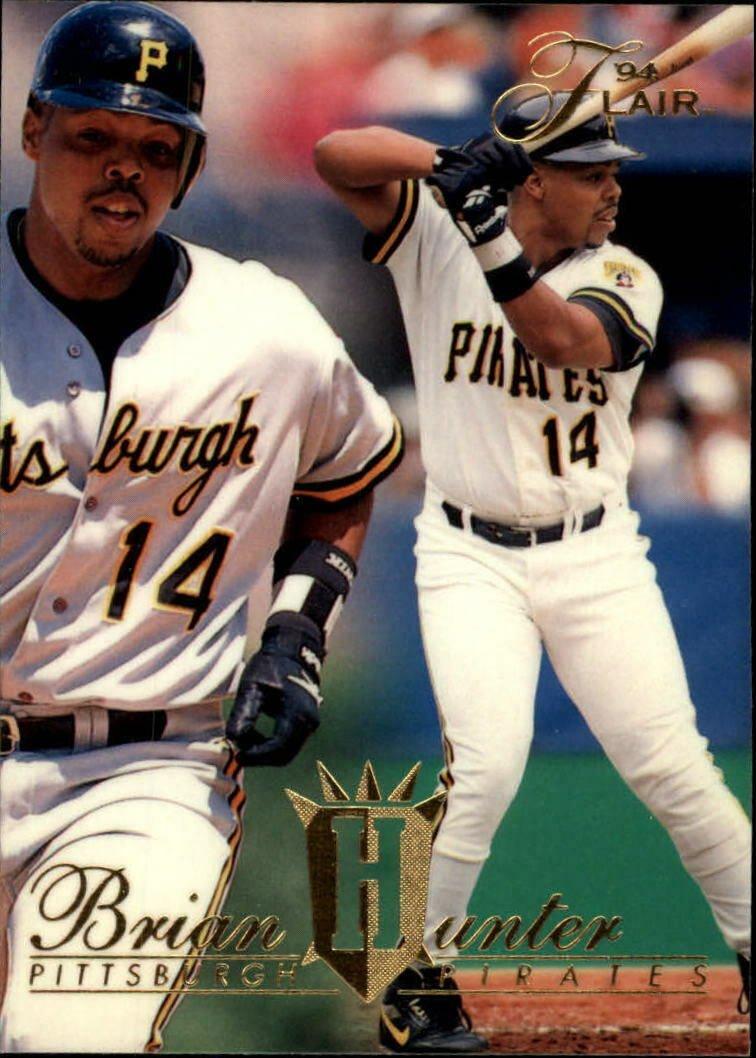 There were a lot of cards to collect in 1994, including a 450-card set produced by Fleer, with the similar name of Flair. It was produced in two series, 250 cards in the first and 200 cards in the second. They were organized by team in each series. In series one, the Pirates cards were numbers 214-222 and included players like Jay Bell, Don Slaught, Al Martin, Zane Smith and Rick White (why didn’t I just name all nine?). The second series had seven cards (#420-#426), including players like Andy Van Slyke, Jeff King, Denny Neagle and #421, Brian Hunter (I did it again, why not just name the other three?). These were high end cards for the day, printed on a thicker stock of cardboard than your average card, and both sides had a UV gloss. There were no borders on the front and gold foil writing, with two quality pictures of each player neatly blended into each other. They were fancy cards to say the least. 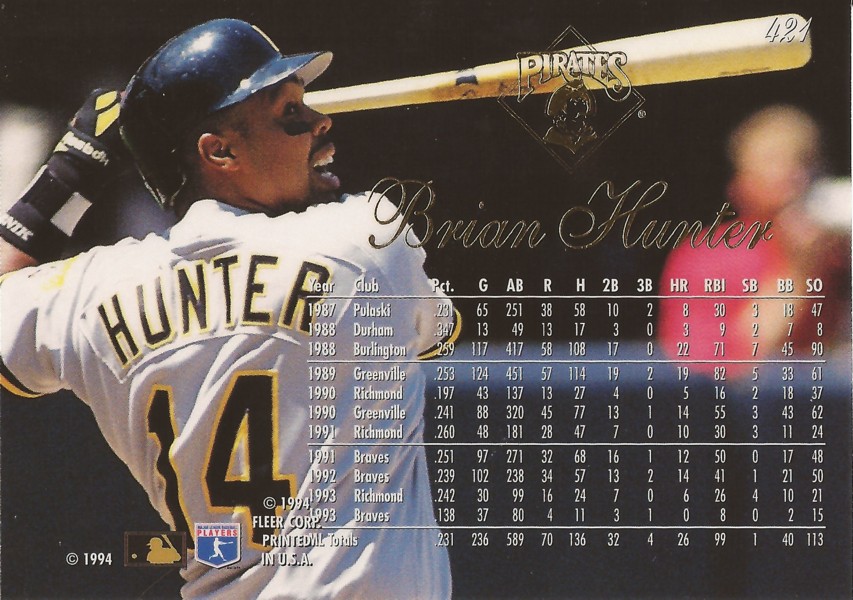 The back included a third photo of the player, serving as the background for the stats, which in some cases made it difficult to read the stats. I’m not 100% sure what is going on in this photo because it’s a very odd shot. Hunter was a right-handed batter, so maybe it’s a follow through swing or he turned to get out of the way of an inside pitch, really not sure. Maybe he wasn’t even batting, just in the middle of doing something else. As you can see, they continued the gold foil writing on the back, which I REALLY like for the Pirates logo at the top. Notice at the bottom that the MLB logo also got the gold foil treatment. Also notice that part of the writing on the bottom covers up part of the stats. Now look to the left of the writing at all of the space, which could have prevented that overlap. Finally, I like the fact that they included all of his career stats as a pro. Some cards would leave off early years in the minors. Some wouldn’t include minor league stats at all.

This is a cheap card to purchase, just not as easy to find as some cards. It was tough just getting a good back scan here. There were only seven options on Ebay, all of them are charging more for shipping than the card itself. One person had the whole Pirates team set for $9.59 delivered, although they had a best offer option, so you should be able to get it a little cheaper. If you’re going to pay about $3 for just Hunter, might as well put out a little more for the other 15 players.