Today’s Card of the Day is a tribute to Pittsburgh Pirates outfielder Angel Mangual, who recently passed away at the age of 73 in Puerto Rico. He played six September games for the 1969 Pirates, which led to the rookie card featured below.  Mangual was one of three players included on a card titled “1970 Rookie Stars: National League”. He’s pictured alongside two other NL outfielders, Oscar Gamble and Charles “Boots” Day. Just one of these players went on to have a strong career, but I wouldn’t say that Topps necessarily missed with the other two players. 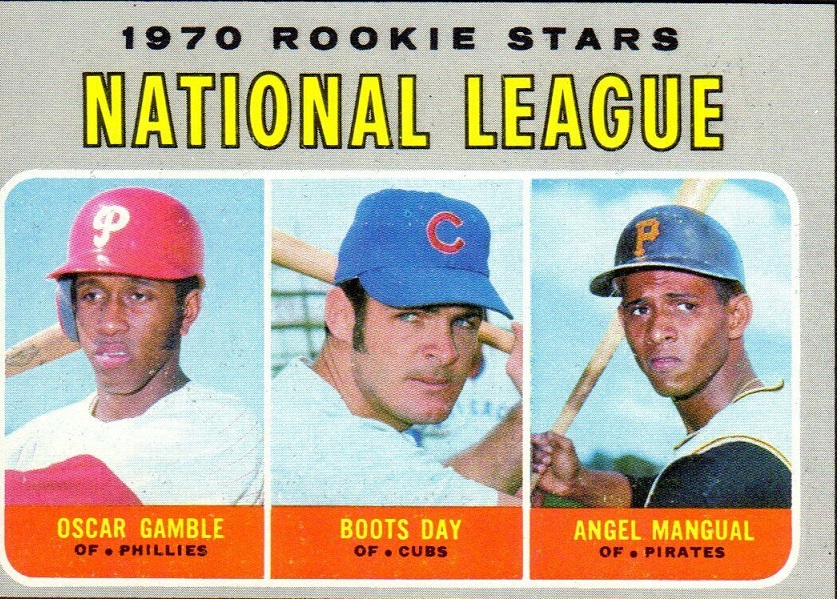 The first obvious thing here might be what is not here. If you know of Oscar Gamble or if you’re old enough to remember him playing, you remember the hair. He had a lot of it. This card doesn’t even look like Gamble. I searched his Topps cards to find the first real shot of Gamble and it was quite interesting to see the natural progression of the hair over the years. I won’t picture all of his cards, but for fun, I’d suggest searching his Topps cards year-by-year to see the subtle changes.

I like the fact that Topps put the nickname on there for Boots Day. He’s known by his nickname now and went by it then. It was a childhood nickname that he says he picked up at six months old from his sister, so he was used to going by that name before he could even talk.

Mangual appearing here makes for a great third player for one simple reason. He played six games for the Pirates, then got traded to the Oakland A’s in 1970 for another great nickname, Jim “Mudcat” Grant.

Interesting/quick side story with Grant. I was once talking with an old baseball fan and he was going on about how good Jim Grant was as a pitcher, even mentioning that he played for the Pirates. I had never heard of Jim Grant and I pride myself on knowing way too much about baseball history. It’s my one redeeming quality. Basically, I was so used to the Mudcat nickname that someone leaving it out had me clueless to who this guy was talking about. I have two Mudcat Grant autographed photos displayed in my room, I have a few of his old cards, I’ve probably been on his Baseball-Reference page 100 times (he’s not special in that regard). I know who he is, but leave out the nickname and he became as obscure as Charles Day.

Anyway, Mangual appearing here is great because photos of him with the Pittsburgh Pirates are nearly impossible to find outside of this card. I found four total the other day while looking for one to feature in the announcement of his passing, and two of those pictures were autographed, so I went with the photo from this card. 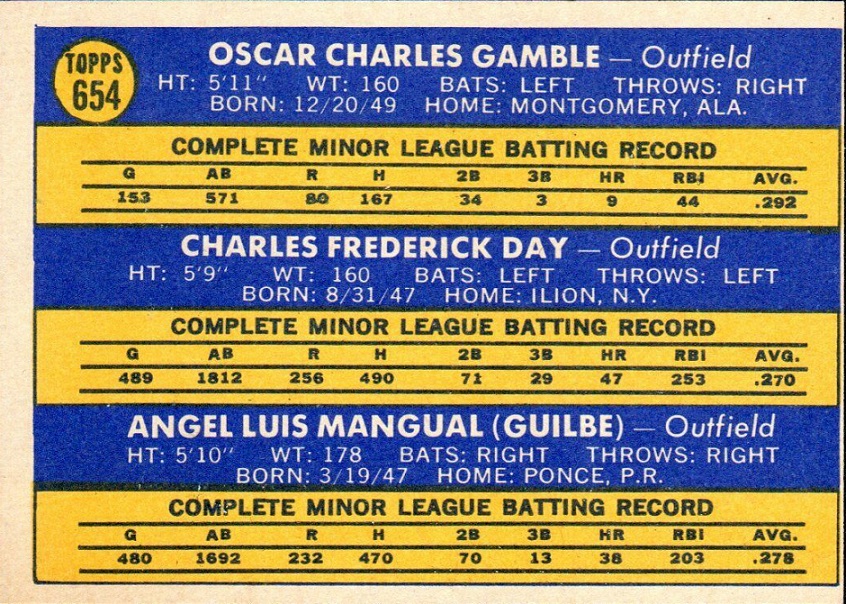 As you can see, with three players featured, there isn’t a lot of room to say much about each player. In fact, all they included for the stats were career minor league numbers, not even the previous season. I mentioned that Mangual wasn’t exactly a bad choice and it’s because his playing time was limited due to being on a great team. The Oakland A’s won the World Series three years in a row. The Pirates were one year away from their World Series win in 1970. They had Willie Stargell, Roberto Clemente, Matty Alou and Al Oliver in the outfield that year. Put him on an average team and he’s getting a lot more playing time, but being a young player trying to break into World Series winning teams and you’re going to have trouble. He still ended up playing 450 big league games over seven seasons.

Day played six years in the majors, two as an everyday starter with the Montreal Expos and another year as a platoon player. Not a great career, but going through Topps cards over the years, you can find a lot of worse picks for rookie stars. What is interesting here is that they got Day with the Cubs and that’s because he was traded to Chicago on December 4, 1969. He was originally with the St Louis Cardinals. If you’re big into cards, you may have paused for a second when you saw that date and then saw him on a 1970 Topps card with his new team. Changes that late usually didn’t make it onto the cards for the next season due to the printing deadline, BUT this is card #654 in the set, so it’s from the final printing series and that gave them time to get a Day photo with the Cubs.

Gamble was obviously a hit for Topps here. They got two guys who put together decent short careers and another who actually fits the “star” title. Gamble played 1,584 games over a 17-year career in the majors, finishing with exactly 200 homers, and a devilishly evil total of 666 RBIs. He was a .265 hitter, who drew more walks than he had strikeouts. He put up a nice 27.1 WAR on offense during his career, though his defensive numbers dragged his career WAR total down.

If you’re interested in adding this card, then know that it’s not a common. Gamble adds some intrigue, but the price is higher because high series cards were printed in limited quantity. It’s much tougher to find on Ebay than most 1970 Topps cards and that’s reflected in the price. It’s also popular because there are set collectors looking for all types of grades, depending on their preference for condition. It’s not a break the bank card, but it’s not the typical $2-$5 card we feature here. You’re going to pay about $15 for one without a crease or major damage/wear. A PSA 8 recently sold for $135, while a PSA 6 went for $41.