Today’s Card of the Day comes from the 1954 Bowman set and features outfielder Cal Abrams, who spent two seasons (1953-54) with the Pittsburgh Pirates. He came to the Pirates as part of a three-for-one deal with the Cincinnati Reds, which sent Gus Bell to Cincinnati, where he became a perennial All-Star, so it was a tough beginning to Abrams’ time in Pittsburgh. Abrams had a solid season of his own though in 1953, then was dealt to the Baltimore Orioles early in 1954 for veteran pitcher Dick Littlefield, which worked out a little better for the Pirates. Before he left in 1954, Bowman got a great card of Abrams with his new team. 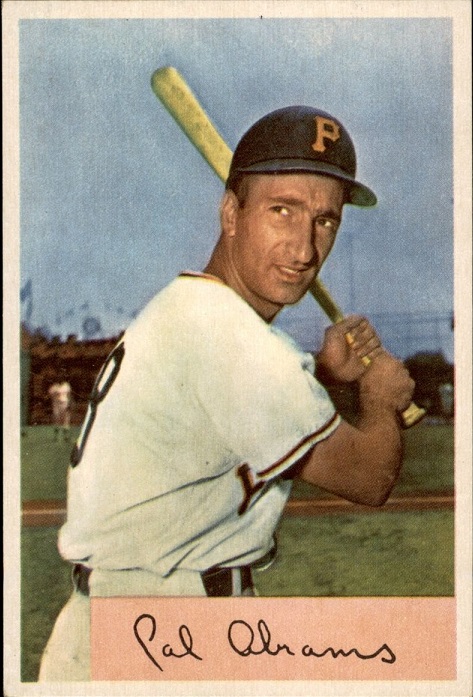 The 1954 Bowman set is a nice one with the colorized pictures. The earlier Bowman cards either had black&white photos, or artist renditions of the players. They had color photos in 1953, which makes that a great looking set, but these are nice too. These cards are slightly taller than your standard card size now, standing at 3.75 inches, instead of the normal 3.5 you get now. The names on the front were all autographs, facsimile of course. I really like the Pal Abrams one here. 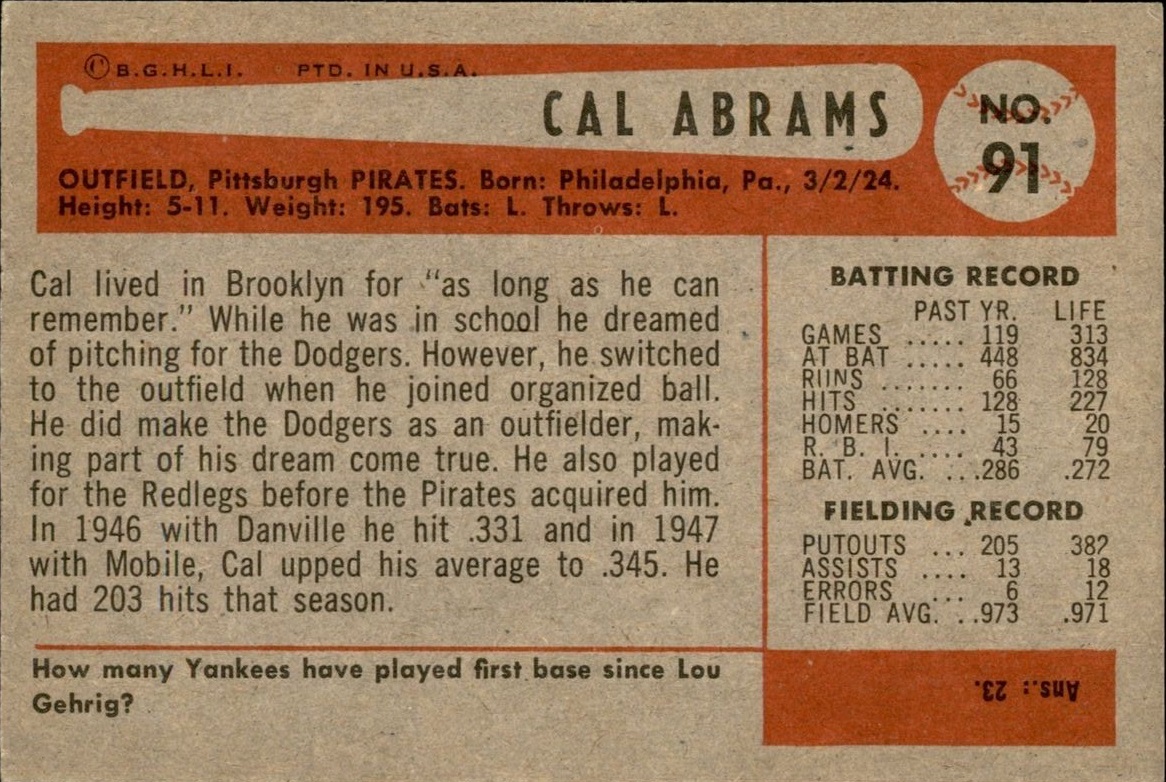 The back has a great fact on the back that I’m guessing nobody knew, but I’m sure it would have been fun trying to guess the names. It would be similar to trying to guess all of the Pirates second basemen since Bobby Hill, at least with the time comparison. Not so much with the Lou Gehrig part.

I looked into Abrams’ minor league stats earlier today for the This Date article because (as you can see on the card) he was born 97 years ago today. That .345 season really stood out because you usually don’t see any of the “three true outcome” seasons back then (in this case, I mean hits and not homers), because guys rarely struck out over 100 times in a season, and if they did, they weren’t drawing a lot of walks as well, or hitting for average. Abrams had a three true outcome season that year with 203 hits, 124 walks and 120 strikeouts. He had an impressive .461 OBP that year, but he crushed that the following season by hitting .336 with 134 walks in 120 games (.497 OBP). Abrams got good at the wrong time in Brooklyn, as they had a strong lineup, which really limited his playing time in the majors. He played 124 games over four seasons with the Dodgers, then after leaving them, he averaged 123 games played per year during the next three seasons.

One important note that this bio leaves off is that Abrams joined the Army before his 19th birthday in early 1943 and missed three full seasons before returning in 1946 to hit .331 for Danville.

If you’re interested in this card, then run to your nearest Ebay and search for it under 1954 Bowman Abrams. I just did it and found 75 options ranging from about $5 delivered all the way up to $330 for one that is graded PSA 9. It’s amazing what people will pay for the grade, because there’s a PSA 8 for sale for $70 and I’ve seen plenty of 8/9 graded cards that look exactly the same condition. There are even a few signed examples available. Abrams passed away in 1997, so while he had time to sign cards during the heyday of signature collecting, he sadly hasn’t been able to sign for quite some time.