Today’s Card of the Day is bigger than most previous cards featured here. The 1985 Donruss Action All-Star set consisted of 60 cards (59 players, one checklist) that were 3 1/2″ x 5″ in size, compared to the standard card size of 2.5″ × 3.5″. These cards were sold in packs of five, which are difficult to find now, though the set itself isn’t that hard to find. Most people put together the sets, and since they weren’t overproduced like many cards from that era, then not a lot of packs survived. One of those cards included in those packs back then was Pittsburgh Pirates second baseman Johnny Ray.  He was a minor star player at the time, still young in his career, turning 28 years old just prior to the start of the 1985 season. He finished second in the National League Rookie of the Year voting in 1982, won the Silver Slugger award at second base in 1983 and he hit .312 with a league-leading 38 doubles in 1984. That was more than enough to get him included in a set that featured 59 of the best players in the game at the time. 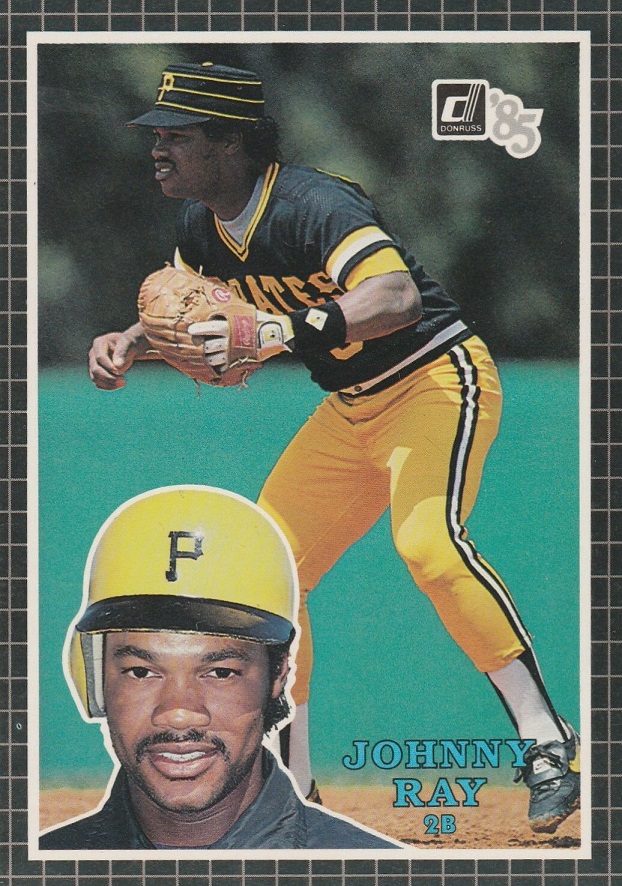 The front of this card has a different design than the 1985 Donruss set, though they both used black borders. The size of the card was the most obvious clue that this wasn’t from the regular set, but the Action All-Star set also included a second photo on front for each player. Every player got one portrait shot and one action shot. Anything from this mix-and-match uniform era looks great, as the Pirates were removed from their glory years but still held on to some of the uniforms from that era. As always, black pillbox caps = win. 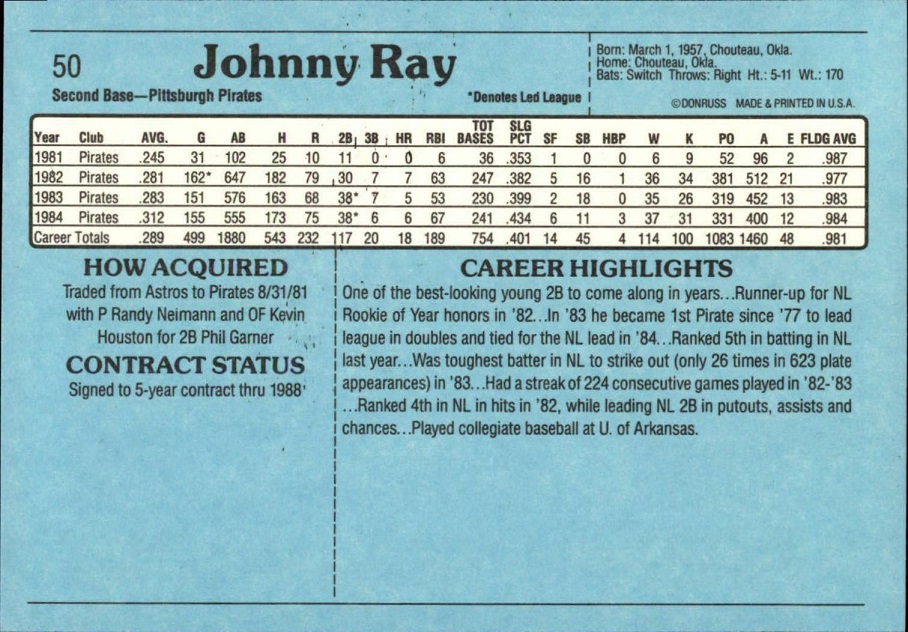 It feels like they didn’t plan this back out well. There’s a LOT of blank space at the bottom. Could have went with bigger typing or added more information, maybe a cartoon or something. Anything but blank space really. What the back does tell the readers about Ray is that he was a good hitter, batting for average, collecting a lot of doubles, and in general, he did a good job of putting the ball in play. He was also a steady presence in the lineup, playing 224 consecutive games at one point. It also tells you that he was among the league leaders on defense at second base, which shows up in modern metrics now. He ranked among the top ten defenders for all position players in the National League three times during his time in Pittsburgh. It also points out that he signed a five-year deal with the Pirates that ran through the end of 1988. Ray was only with the Pirates through late 1987 before being traded to the California Angels.

These cards aren’t very popular, and I believe it’s just due to the size. Very few over-sized cards are popular unless they are pre-WWII cards. Some of the bigger 19th century cards are extremely popular and only a limited amount of collectors can afford them. However, that never seemed to carry over into more recent bigger cards. People like the standard size cards. They are easier to store and display. That makes this card a cheap one to acquire, just with very few options available (you only really need one person selling it for $2 I guess). May I suggest just going for the whole set? You get 60 cards, which includes 21 current Hall of Famers and some players who could eventually make it through the Veteran’s Committee, including Dave Parker (though he’s on the Reds). Besides Ray, Tony Pena also represents the Pirates in this set. You can get the whole set for $10-$12 delivered.