The Pittsburgh Pirates signed 35-year-old right-handed pitcher Rick Reuschel as a free agent on this date in 1985. He went on to have an outstanding first season in Pittsburgh, which led to him being included in a 44-card set put out by Fleer called Baseball’s Best, featuring 22 of the best sluggers vs 22 of the best pitchers. Reuschel was the only player from the Pirates featured in the set. The 1985 Pirates went 57-104, so it’s not exactly a surprise that they only had one player pictured in a set of the 44 best players. 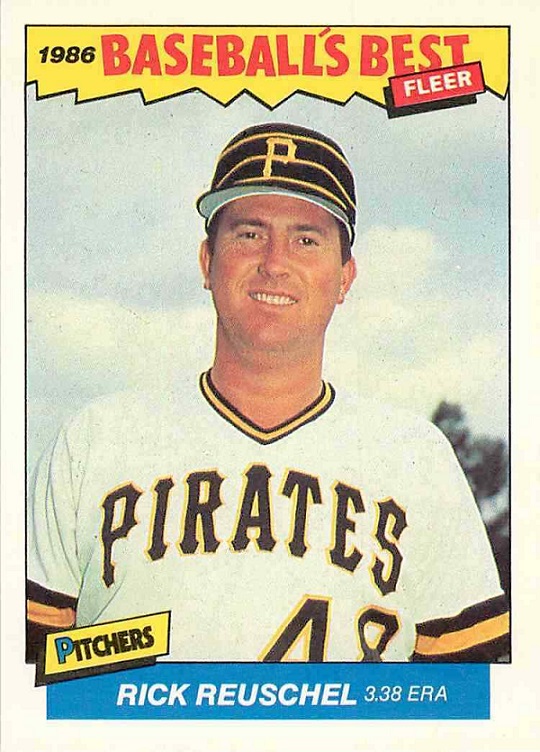 There’s the man they lovingly referred to as Big Daddy during his 19-year career in the majors. It was a career that was very underappreciated I must say. Have you ever heard him get any Hall of Fame support over the years? I’ve heard a few people mention him as being worthy, but it’s a small group of people. Reuschel put up 68.1 WAR during his career, which is 34th all-time, higher than 43 Hall of Fame pitchers. He’s not the best eligible pitcher not in the Hall of Fame, but he’s also not far from that top spot.

When I first saw the scan, I noticed the ERA and thought it seemed oddly high for Reuschel’s 1985 season. I don’t have his ERA memorized, but I did just recently talk to someone about how well some of the 1985 pitching staff did during a bad season in team history, so it was fresh in my mind. It turns out that they used his career ERA on the front and not the latest season. He had a 2.27 ERA in 1985 (more on his stats below).

Have I ever mentioned that I like seeing the black pillbox cap on old cards? 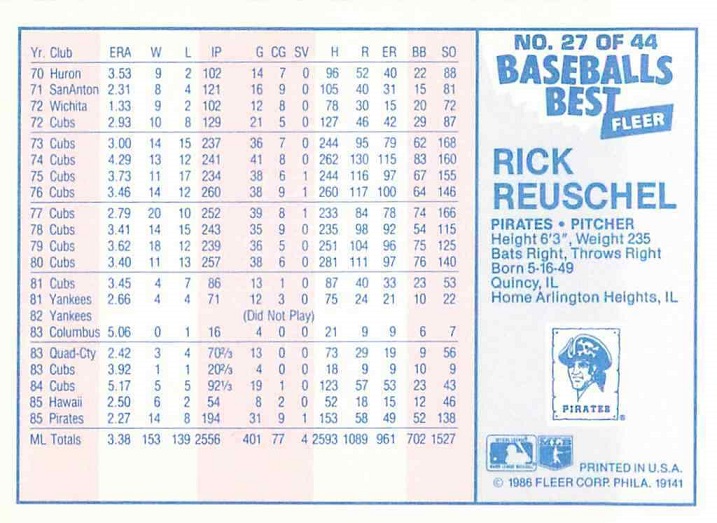 I like that the back has all of his stats, including the minor league numbers over the year. Look at those numbers he put up for the 1985 Pirates. Remember, the team went 57-104 that season. In other words, they were 14-8 in his decisions and 43-96 the rest of the year. These were the typical stats included on cards back then for Fleer, while Topps also included shutouts on their cards at this time. For the record, Reuschel had 26 shutouts in his career, with eight of them coming after this card was produced. He had 153 wins through his first 13 seasons and he finished with 214 victories in his career.

The old Pirates logo looks great as usual on the back, even if it’s the wrong color. The back is rather plain looking here, with the only color seen in the scan here being light pink stripes and the blue for the writing. However, I can’t tell if this is just a bad scan (too light) or an error. The pink is usually more prominent on the back and the box with the bio info/logo should have a lightly shaded blue background.

If you’re interested in this card, you’ll pay about $2-$3 on a site called Ebay. There aren’t many options, but you’ll find one in that price range. There’s an autographed version for $18 in blue ink and $5 in black ink. Those were in-person autographs and not company released. You could also choose to just go for the entire set, which comes in a box with the checklist on the back. There are a few options in the $5-$6 range (and a lot in the $6-$10 range), which includes delivery.