Today’s Card of the Day features Hall of Fame third baseman Pie Traynor, the best third baseman in Pittsburgh Pirates history and the man who was voted as the best third baseman in the first 100 years of baseball during Major League Baseball’s 1969 centennial celebration. Traynor was elected to the National Baseball Hall of Fame on this date in 1948, so that makes today a good day to look at one of his strangest cards. The 1933 DeLong set is one that you either love or hate, and if you don’t have an opinion on it already, it just means that you’ve never seen the cards. So let’s get right into the card. 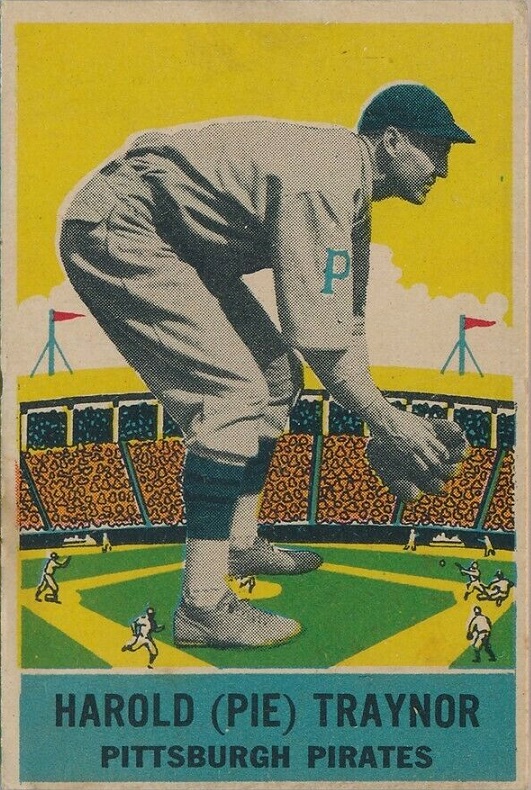 Here’s where you say that you really like or don’t like the look of a giant baseball player posed over a game going on below him, where the players don’t even seem to care that a 200 foot man is crushing the pitcher because there’s a play at third base to complete! The crowd looks like something you might see in a petri dish under a microscope. The player is an off-color, like they sort of wanted black & white photos, but not really. Then there’s the low clouds and bright yellow sky that just completes everything. Did you notice that there are shadows on Traynor, but not around him? I didn’t even see that part until editing the article.

Really take it all in, then let me know your opinion in the comments. 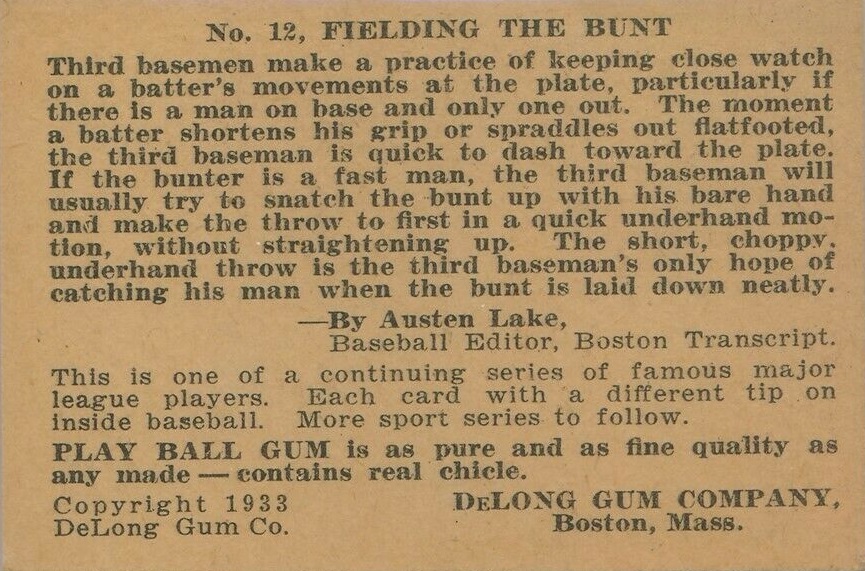 Most backs of baseball cards either have a large advertisement for their product or a bio of the player pictured on front, along with a small ad on the back. This card has a small ad, plus a quote from baseball editor Austen Lake about playing third base. I guess the third base part relates to Traynor, but why not have a quote from him about playing third base? Or maybe a quote from someone else is about Traynor would be nice? I will say one thing about the quote though, it’s much more relevant to the era than it is now, which I think is something that gets lost when people talk about how good Traynor really was when his career WAR is only 37.3. His defense is severely underrated by modern metrics and he was considered as the best at guarding against bunts back when that was a big part of the game.

If this is a card that you’re interested in purchasing still, then the price might turn you off.  The highest grade one on Ebay now is an SGC 80 (same grade as PSA 6) and the seller is asking $825 (has a best offer option though!). A PSA 4 is $700, but it has the best offer option as well. Then there is a PSA 2 for $610. I was going down in price from top to bottom and I hope you didn’t run to Ebay to get those because there’s also a PSA 4 for $450. Those are the only options on Ebay at the time of this writing, so there are no bargain options, unless you go for the reprints, which can be had for a small handful of $1 bills. This card will end for cheaper in an auction format on Ebay, you just need to wait for one to come up and that happens about once a month because these cards are rare.